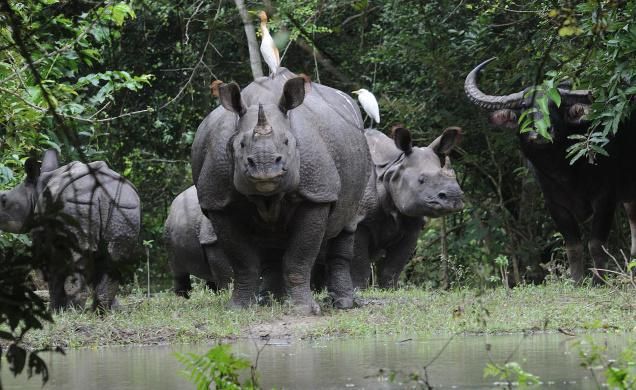 Situated in the mouth of Ganges distributaries, it is one of the best tourist destinations of West Bengal. The name is derived from the abundant mangrove “sundari trees”.  The trips is all about sailing through these waters  and channels for 3 days long, a one of a kind adventure in the world. BEWARE! Don’t set your foot on land! The jungles are home to the wild Royal Bengal Tiger. Rarely seen though, these tigers are one of the grandest wild cats in the world. So, if you are lucky, you will earn a treat whilst your stay. Although you will surely come across numerous Fishing Cats, Macaques, Wild Boar, Indian Grey Mongoose, Fox, Chitals, and primates of all sorts. Numerous Indian and migratory birds throng these forests. Crocodiles are abundant in these waters and you will find them swimming, basking or day-dreaming in every nook and corner of the waters.

How to get there:
By Air: Sundarban National Park is located 140 KM far from Kolkata Airport(Also known as Netaji SubashChandra Bose Airport or DUM Dum Airport)

Known as the abode and biggest habitat of Indian rhinoceros, this forest is Assam is place of its own kind. A very simple forest to the naked eye, Kaziranga is a unique habitat and ecosystem supporting a wide variety of flora and fauna. The park hosts two-thirds of the world’s Great One-horned Rhinoceroses. Kaziranga boasts the highest density of tigers among all protected areas in the world and was declared a also as a Tiger Reserve in 2006. A wide variety of bird population has earned it the title of Important Bird Area by Birdlife International. It also boasts of huge populations of Wild Asiatic Water Buffalo, Eastern Swamp Deer, elephants, gaur, sambar, hog deer, wild boar and numerous other species. Kaziranga has the largest population of the Wild water buffalo anywhere accounting for about 57% of the world population. Other than that it houses numerous kinds of cats, snakes and many species of turtles in its waters. Simply put, it is a paradise for animals and animal lovers. Hop onto an elephant’s back and go exploring!

How to get there:

Air: The adjacent airport is located at Guwahati, which is 217-km clear of the park. The other airport is positioned at Jorhat, 97-km as of Kaziranga.

Rail: The close railhead is Furkating, placed 75-km ahead of Kaziranga National Park.

Road: The gateway for Kaziranga Wildlife Sanctuary, at Kohora region on the NH-37, links with a handful of cafes and a little regional bazaar. ASTC and private buses end here, the root is from Guwahati, Tezpur and Upper Assam.

Portraying the grandeur of ancient India Konark sun temple is a gem reflecting India’s ancient architectural sciences. This 13th century Sun Temple also known as the Black Pagoda is situated at Konark, in Odisha. It was supposedly built by king Narasimhadeva I of Eastern Ganga Dynasty around 1250.  The temple is of the shape of a gigantic chariot with wheels on its sides. But the major part of the structure is now lay in ruins. The architecture and design of the temple has eluded architects and historians for years. The intricate carving all over the temple walls has numerous stories and facts to tell. The temple is built with features resembling the journey of sun through the sky each day of the year.

How to get there:

Road: konark is approximately an hour’s drive from Bhubaneshwar, capital city of Odisha. Bhubaneshwar is well linked to rest of India by rail and air.