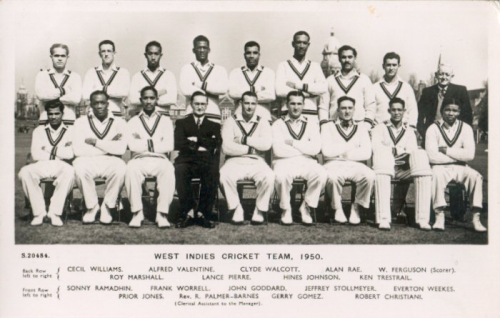 Within the Commonwealth of Nations formally the British Commonwealth the sport known as Cricket is very popular and is played by a lot of the nations that make up the Commonwealth of Nations. Jamaica and the Caribbean is no different; the Caribbean is represented within the world of Cricket as the West Indies. Instead of individual island states forming international teams the region is united and represented as the West Indies Cricket with the players being selected from the British Caribbean. The region gained Test Cricket status in 1928 and matured relatively fast when compared to other nations Within the Caribbean, the summer of 1950 is recognized as the time when ‘Windies Cricket’ established itself as a superpower within the world of cricket can is often viewed as the appetizer for what was to come for the next three decades. This test series visit to England was only the seventh series since being granted Test Cricket status and little did the spectators know that they were in for a masterclass treat on display by individuals who are now legends of this sport we all know and love. Phenomenal fast bowlers is a common treat in the Caribbean and this came as a surprise to all opponents who just did not have any answer to the devastating pace on display. The West Indies Cricket team relied heavily on the bowlers and this series will forever be in the memories of every West Indian Cricket fan. The West Indies won the series 3-1 by bouncing back after losing the first match. The game that stood out the most for me was the second test match which was played on June 24 – 29, 1950

After the victory a calypso artist by the name of Lord Beginner wrote a song in celebration of the victory which expressed the sentiments of the Caribbean. The link below is for the song.