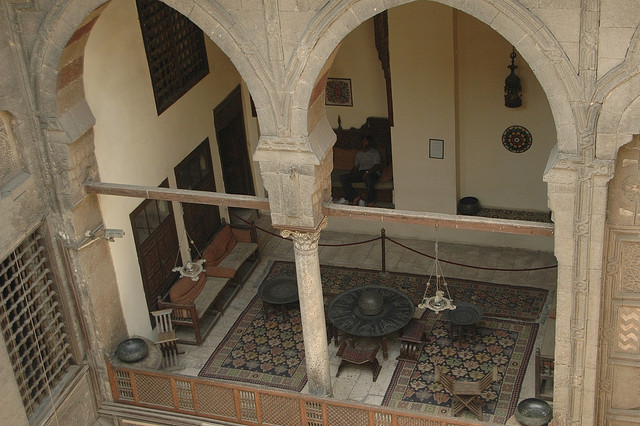 I would like to appreciate the efforts of Prof. Dr. Ping Kong who I take her explanation as a guideline to do this paper applying the dynamics of heritage economics.  I would like to thank my colleagues on their encouragement and efforts during collecting data – which to be useful in my research – especially Mr. Abdel Aziz M. Kamal, the conservator at Gayer Anderson Museum.

The Egyptian heritage sites have a great economic value regarding its culture significance and outstanding universal values. Some of these sites have a great problem “the fund” which might be tackled throughout investing economically the site. The paper shows a brief historical background about the site, introduces an economic evaluation, and analysis as well as suggesting some recommendations which shall be assisted the Egyptian government to develop the site as to have a capability of covering its expenditures as self-financed entity.

Methodologically, a research study starts with the theoretical aspect of reviewing references, including books, articles, research papers, and reports of Egyptian government.  The author follows and prepares in-text citations and the final bibliography according to the standards of the American Psychological Association (APA), 6th edition.

According to Robert Yin’s book “Case Study Research: Design and Methods” (2011), when writing a dissertation one can select a case study as a research strategy, applying both qualitative and quantitative methodologies including one to one semi-structured interviews, document analyses of national statistics, and conducting direct observation.

In 1935, Major R.G. Gayer Anderson Pasha resided by the Egyptian government to reside in one of the old Arab houses called “Bayt al-Kritliya” under the care of the Arabian Monuments Committee.  He had been interested in Egyptology and oriental studies, subsequently, he aggregated his various valuable collections of domestic furniture, faience, carpets and other objects which are representative of the arts and crafts of the Near East.

Gayer Anderson museum is situated to the south-eastern side of Ahmed Ibn Tulun Mosque in el-Saliba Street, the district of Sayeda Zinab, Cairo governorate.  It is one of the most magnificent and interesting specimens of the 16th and 17th century’s Arab domestic architecture which remains in Cairo and provides an ideal setting for objects.  These objects date back to an ancient Egyptian, Greaco-Roman, Coptic and Islamic eras.  Furthermore, this museum consists of two monumental buildings. First one, the monumental building no. 321 “Bayt Abd al-Qadar al-Haddad” constructed in 1632 A.D. by Hajj Mohammad Ibn al-Hajj Salem Ibn Gamal al-Gazzar.  this house was became into the possession of a wealthy Muslim woman from Crete, so it popularly known “Bayt al-Kritliya”, or “House of the Cretan Woman”. Second one, the monumental building no. 559 “Bayt Amna bint Salim al-Gazzar” constructed in 1540 A.D. by Abdel-Qader al-Haddad. (Williams, 2002, pp. 50-51) (Vaughan) (Gayer-Anderson, 2001, pp. 17-22)

Bayt al-Kritliya or Gayer-Anderson Museum consists of multiple values. Firstly, it has cultural value in relation to intangible Egyptian heritage especially Egyptian social life including traditions, customs, and Egyptian believes, for instance, thinking in what called “Taset al-Khada”. Secondly, it has aesthetic value that allows the craftsmen to use the Islamic motives such as the Arabesque forms and the Islamic architectural designs.  Moreover, this museum has already other values such as historical and authentic values.  These two houses date back to the Ottoman period (16th and 17th centuries A.D.).

The museum’s admission fees are demographically divided regarding Arabians or foreigners.  For foreigners, the entrance fee is 60 Egyptian Pound (L.E.).  For foreign student, it is 30 L.E. in case of holding International Student ID Card (ISIC).  For Egyptians, it is 5 L.E. while two and half L.E. for Egyptian students in case of holding a valid student ID from Egyptian university or school. The total amount of inflow via tickets sold was annually estimated about one million L.E especially before the period of Egyptian revolution (25th of January 2011) (Gayer-Anderson Museum Management, 2014).  There are other fees for Cinema shootings or taking photos using flash.  These fees divide regarding three categories (Advertising, Novelist, commercial and Documental). (Supreme Council of Antiquaties, 2006, p. 7)

Since 2008, a maximum daily rate of visitor numbers was reached 2000 visitors for both Egyptian and international visitors while, after the 2011 revolution, it dropped down less than 1000 visitor (Gayer-Anderson Museum Management, 2014).

For visitation-related facilities surrounding the property, there are only one small Bazaar (Gifts House) ten years ago and some local restaurants as well as other tourism-related activities around Gayer Anderson Museum and Ahmed Ibn Tulun Mosque.  In contrast, there aren’t hotels or touristic guest houses. (Gayer-Anderson Inspectorate Office, 2014)

In 2007, Supreme Council of Antiquities (SCA) was maintained this museum under supervision of architect Mr. Nicholas Warner.  The conservation process was costed around 302,215.00 USD. (Archnet, 2007, p. 1)

In real way, the Ministry of Antiquities (or SCA) pays monthly salaries minimum around 58,000 L.E. according to the following table:

“A monetary indicator is provided by the entry price paid, enabling aggregation of a total use value generated by the building or site over a given period of time. For many heritage sites visited by tourists, the use benefits would also include revenue from the commercial exploitation of the site.” (Throsby, 2012, p. 52)  Consequently, the research couldn’t suggest increasing the value of entrance fees for two reasons. Firstly, this increase isn’t consistent with the current Egyptian economic life so the majority of Egyptian families, e.g., five-individual family, can’t visit this museum especially the poor class if the entrance fee is risen up to, i.e., more than five L.E per person. Secondly, this increase will become a real obstacle in front of putting this property in internal tourism itineraries.

Analyzing the previous economic data, the inflow of this historic property isn’t in balance with its outflow.  To give on example, the total amount of annual employees’ salaries reaches totally around 696,000 L.E.  So, this non-balanced budget will effect on the annual projects of conservation and site management.

Although Gayer Anderson Museum has high architectural, and multi-historical value attributes and objects as well as an adequate carrying capacity, it is not more attractive for tourism itinerary regionally or for the surrounding local community as result of a lack of interpretation, which help the site or museum’s visitors to understand the heritage value as well as enhancing their heritage experience. So, this site museum will have a reduction in the visitor numbers’ rate and subsequently, a reduction in the generated revenues.

Actually, the cultural heritage value can be used not only for raising an income generation of a heritage site but also for developing a socio-economic factor.  So, tourism is considered one of economic investments in order to push the generated wheel of heritage property’s revenues.  Moreover, using the cultural integration factor, the site can create some strategies including the sustainable development plan. (UNESCO Thematic Think Piece, May 2012, pp. 3, 4)

The site museum Bayt al-Kritliya consists of both tangible and intangible heritage.  Initially, it is located in the core of Egyptian World Heritage City “Historic Cairo”.  According to the description of the World Bank, this museum is inserted under what called “Heritage as asset”.  This site museum can unite with the surrounding heritage properties forming a great heritage open air museum like the heritage projects in el-Mua’iz street, Khan El Khalili and so on.  Consequently, applying this idea will rise up the rate of investment on both sides of heritage product and services. Additionally, this will be assisted overtime to create long-term strategies for a preventive maintenance, conservation, upgrading….etc.   (Throsby, 2012, pp. 46-49)

According to the current economic situation of this site museum, research introduces some recommendations which probably raise step by step the museum’s revenue in order to cover the museum expenses.  These recommendations represent in heritage-related projects or education-related seminars which open more job opportunities for at least the surrounding locals.

Promotion of national cultural heritage industries is considered so necessary creating new job opportunities and other commercial initiatives (Throsby, 2012, p. 65).  According to my best knowledge, since 1977, after the film “The Spy Who Loved Me” by the famous actor James Bond, there aren’t any shooting movies inside this site museum.  Moreover, there are old Arabic Egyptian movies, such as “Shafiqa wi Metwalli” and also “al-Imam al-Ghazali”, which was shooted on-site (Bayt al-Kritliya Inspectorate Office, 2014).  So, the site management should invite Cinema and TV programs that Islamic history movies or episodes and Islamic religious programs can do in the museum garden throughout its adequate carrying capacity.

The heritage site done the criterion of “Quasi-option Demand” that tourist prefer staying more time on-site for enhancing their heritage experience (Nijkamp, 2012, p. 82).  Consequently, this site museum should found an interpretation office attracting the suitable rate of visitor numbers on both levels the national level especially school and field trips, and the international level; moreover, raising the museum income via offering the paid services.

The site management can invest the museum garden as a cultural café on the Arabian harmony, attracting who are interesting in the Arabian and oriental civilizations, offering Arabian music by the oriental musical instruments, Arabian drinks and so on.  Also, it can open bookshop or souvenir kiosk selling Arabian heritage-related books and other tourism guidance books, CDs, and DVDs.  This site musuem can reactivate the function of the celebration hall in the 1st floor of Bayt Amna Bint Salim, was used for marriage parties, creating online parties but through a conservative strategy.

The museum can create workshops for the surrounding local craftsmen in order to make simply their handicrafts, whatever wooden (e.g. Arabesque), poetry, alabaster, metal…etc., in front of visitors as a promotional tool.  This step probably matches between the surrounding local community and the heritage property; subsequently they will automatically preserve the site museum through feeling its economic value.  So, this site museum will accomplish the criterion of “Bequest Value” (“Bequest value: non-users see it as their moral responsibility to protect and maintain a certain public good for future generations.” (Nijkamp, 2012, p. 82)).

The museum can invest its roof as an atelier for the professional drawer.  It has a wonderful panorama that overlooks the majority of Islamic heritage properties.  Additionally, it can invite the faculties or institutions of arts such as faculties of art education; fine arts; and applied arts wherever in Egypt to perform their educational seminars on the museum roof and at exhibition halls in charge of participating in the annual museum budget and also supporting expertly in the conservation processes in order to mitigate the annual budget.

4- Gayer-Anderson, R. G. (2001). Legends of the House of The Cretan Woman. Cairo: The American Unversity Press.

Mysore’s Ganjifa: is it time to play the ‘dying heritage’ card?