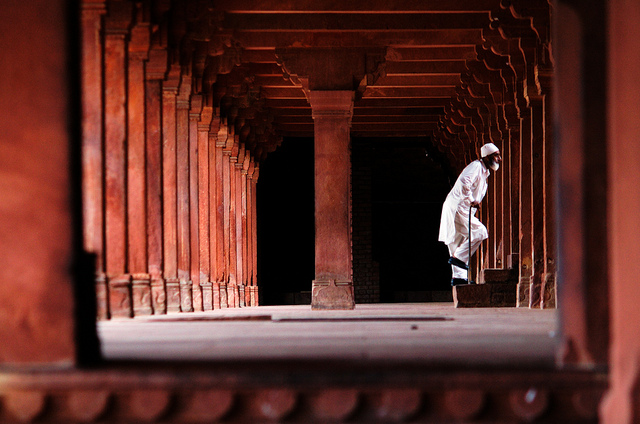 The world is a bridge, pass over it, but build no houses on it. He who hopes for an hour may hope for eternity. The world endures but an hour. Spend it in prayer, for the rest is unseen”.

-A Persian inscription on the Buland Darwaza, Fatehpur Sikri

Fatehpur Sikri, known as the ghost town with superior architecture and a fascinating history, has always been one of the most popular tourist attractions of North India.

Situated on a low hill of the Vindhya Range, 35 kilometers from Agra, a walk through this town takes you back four centuries to relive the Akbar era of the Mughal Empire.

The glorious history of Fatehpur Sikri can be traced back to the times of Babur, the first Mughal Emperor of India, who won the city after defeating Rana Singh of Mewar in a battle. He named it Shukri, which means “thanks”.

Fatehpur Sikri was also the home of an acclaimed Muslim astrologer and Sufi saint, Shaikh Salim Chisti. Akbar visited him in 1568 to ask about the kingdom’s heir to which Shaikh replied that a heir would be born soon. Soon after, Akbar’s wife gave birth to a baby boy, who was named Salim, after the Sheikh.

About 2 years later Fatehpur Sikri was declared as the new capital of the Mughal Empire by Akbar. This was not an emotional decision, but a rather strategic one as Akbar planned to expand his empire and take control over Gujarat which was the neighboring state and lucrative for its coastal towns and trade with middle east countries.

Constructions in the new capital began in 1571, and continued till 1585 during which Akbar, rather fondly and lavishly, made the city his home. However, this capital was completely abandoned in 1586, by Akbar for reasons unknown. Some theories suggest that, he had to move his base back to Delhi to wage a war against Kabul, whereas others suggest that Fatehpur Sikri was discarded due to the shortage of water.

The city was however, not completely deserted and was used as a residence for several queen mothers. Jehangir, the son of Akbar also camped here for a few months when a seething plague spread in Agra.

During the years  between 1702-1748, Muhammad Shah, the Mughal Emperor was  coronated. The city was sparsely populated during this time but was later completely abandoned.

Lord Curzon, the then Viceroy of India sponsored an archaeological survey and restoration efforts in the first decade of the 20th century. The stone cutters might have left the place to sell the stones, for a living, but the beautiful mausoleums, the mosques and the Mughal spirit that resides in a place continue to charm the discarded city.

If one were to walk through Fatehpur Sikri, through its alluring pavilions and royal dome stacked statures, if one were to stare at the intricate carvings on their mausoleums, or be astounded by the height and the might of the Buland Darwaza, it would perhaps take an eternity to fully understand and appreciate the dynamics and the thought process that has gone in its architecture.

Fatehpur Sikri has many sights to its pride. The Jama Masjid which when built was the biggest in the Indian subcontinent, is entered via the magnificent Buland Darwaza.

With its phenomenal height of 40 meters, it is made of red and buff sandstone and is decorated with black and white marble. Like most other mosques made in the Mughal era, this building is elevated and is approached by a flight of steps.

There is a huge central courtyard with arcades with Hindu style carved columns. The domes are supported by the corbels exactly like the Indian Temple architecture. The largest area of the city is the Fatehpur Sikri palace complex which has a design similar to that of other stately Mughal Palaces. It gives a staggering impression of a Hindu palace, but has a few symbols of Islamic designs as well. The palace also houses the Diwan-i- Aam, a place where Akbar usually addressed the commoners of his kingdom.

The World Heritage Site status of Fatehpur Sikri turns 30 this year. The WHS status has surely garnered more tourists, more attention and appreciation towards the history and the architecture of this Mughal abode and has definitely brought a change in the operations of this heritage site.

Given its spectacular history, architecture and legacy, Fatehpur Sikri was conferred with the status of UNESCO World Heritage Site in 1986 under the criteria  (ii, iii, iv)

(ii) to exhibit an important interchange of human values, over a span of time or within a cultural area of the world, on developments in architecture or technology, monumental arts, town-planning or landscape design;

(iii) to bear a unique or at least exceptional testimony to a cultural tradition or to a civilization which is living or which has disappeared;

(iv) to be an outstanding example of a type of building, architectural or technological ensemble or landscape which illustrates (a) significant stage(s) in human history;

While many steps have been taken to preserve the site, there have been a few negative implications as well. The Archaeological Survey of India, which is responsible for the maintenance and conservation of the site has been taking essential steps to restore longevity of the old structures by replacing decayed stones by stones that match the original form, and by using traditional material. However, tourist and visitor facilitation have caused some alterations in the originality of the property. The Fatehpur Sikri has been announced as the “Centrally Protected Monuments of National Importance” under the “Ancient Monuments, sites and Remains Act 1958”, and is entitled to follow certain provisions. The local and the state authorities too, have been actively involved in the interests of Fatehpur Sikri.

In fact, the State Party is considering a revision of the property boundaries and planning to extend the buffer zone under the “Fatehpur Sikri Master Development Plan” with establishment of a tourist center near Agra gate. The Supreme Court too had passed a law stating that no shopping complex or other commercial activities would unfold in the premises of the World Heritage Site.

However, there have been numerous reports about illegal sandstone quarrying in Fatehpur Sikri which is causing damage beyond repair to the monuments.

According to a report in the Times of India, “In an example of gross negligence by government officials, the quarrying has already destroyed prehistoric caves and is slowly moving towards Fatehpur Sikri. Today, these prehistoric caves lie destroyed and Fatehpur Sikri’s monuments such as the western fortification wall and Buland Darwaja have been irreparably damaged.”

Since the inscription of the WHS status to Fatehpur Sikri, facilities like Information Centre, information kiosks, ramps for physically challenged, rest centers, guide availability, audio cassettes, toilet booths etc., have come up. This has enabled better tourism management, but has also affected some functional aspects of enclosed areas and points.

Fatehpur Sikri-, a culture with a legacy and history to boggle minds, a time travel through the lost kingdom.  A city, that long lost its civilization, but continues to keep alive the spirit of the Mughal Kingdom, the Mughal magic, a city’s heritage that is left for us to protect and preserve.