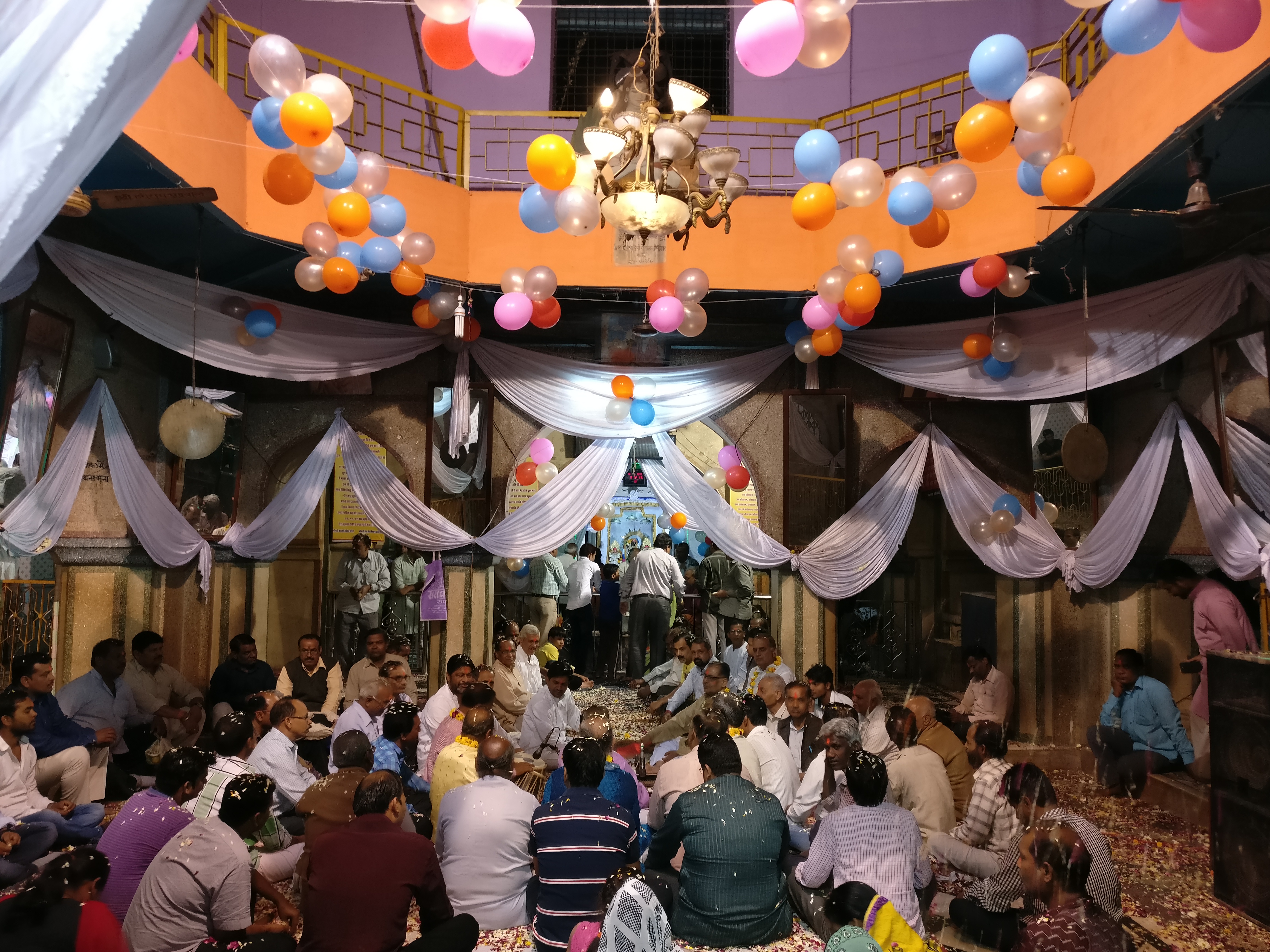 The Murli Manohar temple in Jhansi is a 250 years old temple, with a deep history of rebellion and resistance to British elements. However, one would have trouble comprehending the uniqueness of this mandir, unless close attention is paid to the surrounding bazaar and its structure.

A close examination of the temple’s architectural details would help one grasp the historical and functional transition it has been through. The abrupt location of this mandir in an open bazaar, as well the absence of a dome, could be attributed to how once it merely served as a house for Sakku Bai(1780), the mother-in-law of Rani Lakshmi Bai. Unlike other domed temples, this temple’s top is a baradari (A square structure with 3 gates on each side), its architecture that of a royal house, with open verandas that have now turned into halls.

Inside the Garbhgriha, the idols of Devi Rukmani, Radha-Bai, and Lord Krishna are placed side by side. These idol of Rukmani, a Marathi and South-Indian goddess placed along with North-Indian pair of Krishna and Radha exemplify the inter-mingling of Marathi and Bundeli culture. They were the source of daily worship for the royal family and the Marathi born, Rani Lakshmi Bai. At her arrival to Jhansi, she was accompanied by Marathi priests, who have been devotedly taking care of this mandir for 6 generations now.

Currently living in the outer premises of the temple, the native Marathi Golvalkar family have been providing as the keepers and priests of this temple, and organise festivals on a grand scale every year.

Upon being asked what makes this particular temple unique, one of the main temple priest, Mr. Golvalkar mentioned a widely believed narrative, “A direct surang (secret tunnel) linked Ranimahal to the temple, through which Rani would often visit the temple on horse-back. However, under the recent reconstruction and city planning, the surang has been shut close and only a small glimpse of it remains.”  The only remaining proof of the surang now is an empty dark hole in the middle of a brick wall. The Temple is also associated with the 1857 revolution, for it had provided refuge from the British to Rani’s father and a few royal workers.

The mandir is also known for its grand celebration Phoolon ki Holi (holi of flowers). I was fortunate enough to attend the Holi celebration in the month of March. Before even making our way into the bustling temple, one could sense the celebratory mood inside with the fragrance of rose and jasmine in the air and hear the devotees singing along with the band. As soon as we entered the main hall, our feet were covered with flower petals, and were surrounded by people playing Holi with them. For the first time in my life, I had participated in the festival of colours with colourful petals flying through the hall, from one end to another. This floral celebration of Holi is a rare occurrence in a city where one usually indulges in playing Holi with gulaal (dry colours). The joyous mood of the devotees increased as trays of jalebis and thandai, which were prepared by the Golvalkar family and the devotee’s funds, were passed around the hall.

The most amazing sight was that of the awe-struck people from age of 6 to 80, especially the hesitant and shy women who couldn’t contain their smiles and excitement while showering each other with flowers. They kept watching the petals land on their own face tenderly, making them feel elated and light, just as the petals.