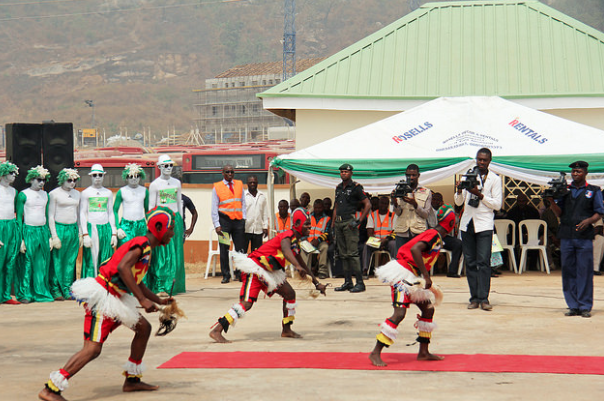 The Atilogwu dance is a traditional dance performed by the Igbo ethnic group of Nigeria. The Igbo people inhabit the eastern region of the country. They are united by their history, traditions and cultures which include religion, dressing, beliefs, dances, and other cultural phenomena. Dancing takes precedence over other forms of entertainment in Igbo culture, as expressed by its involvement in many of the local festivals that take place in the region. Among all the traditional dances in Igbo land, Atilogwu is the most popular, widely performed and one of the oldest.

The dancers perform vigorous body movements, an array of energy sapping moves, several rigorous training protocols, displays of acrobatic prowess and stunts. This dance is usually performed by agile youths who have been trained for years.
Originally, the name ‘Atilogwu’ can be traced back to the time the dance was introduced. Spectators and onlookers were astonished at the skills and techniques showcased by the vibrant Atilogwu dancers which prompted them to ask themselves “is this magic?”. ‘Atilogwu’ literally means “is this magic?” when translated from the local dialect.

The performance is enhanced and accompanied by traditional musical instruments like drums, opi (a flute-like instrument), ogene (a metal gong) and Ichaka (a beaded gourd), which add a score to the intricate dance. The beat of the drum and “ogene”, dictates the tempo of the dance, and sets a rhythm to the music as well.

The Atilogwu dance is usually performed on important occasions like marriages, festivals, coronations and other important celebrations that involve the participation of the community. Usually, the occasion includes sumptuous and exotic dishes created from genuine and original Nigerian recipes, served in a buffet style. It remains one of the most popular and oldest traditional dances in Nigeria.

The dance has gained both local and international recognition and has been performed all over the world.

The Eyo Festival of Lagos

Ghalib ki Haveli: A remnant of the Mughal Empire