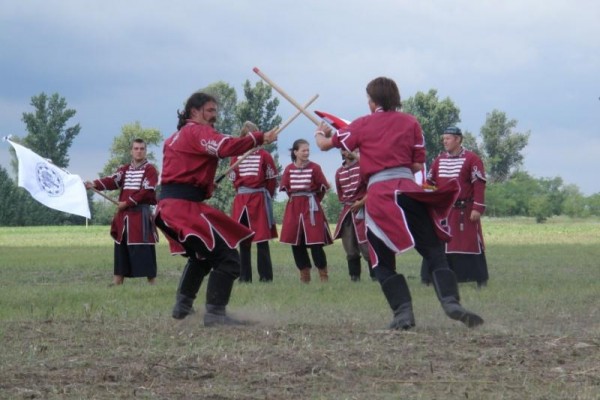 Chinese and Japanese have their culture for martial arts, but very few people know that Hungarians have it as well. The community and philosophical frame which holds together the elements of martial arts, folk and cultural heritage, is called Baranta. It includes a wide range of fighting proficiencies, its disciplines vary from traditional long range  weapons  to  face-to-face  combat,  from  individual fighting skills to military leadership, including organizational and community leadership capabilities.

Baranta consists of  two  branches,  infantry  and  cavalry.  Both branches deal with unique types of fighting. Their most important weapons are: bow, saber, short and long stick, spear, lance, axe, shield, battle-axe, long whip, throwing star, knife, etc.  Bare-handed fighting methods are  differentiated  between ceremonial wrestling (belt-wrestling) and the more lethal type which includes kicking  and  punching,  the  so  called  combat  wrestling  (böllön).  The cavalry branch demands cooperation with the horse to such an extent that it should be able to be controlled and used in battle without any equipment whatsoever.

Training and personality-forming methods of  Hungarian  warrior  communities,  who  had  compiled  a  great  amount  of knowledge  of  fighting  skills,  have  been  around  for  at  least  1300  years. Hungarian social groups had to fulfill the tasks of self-defense, farming, and at the same time forms of worship.  Between 1848 and 1941, parts of Baranta appeared in the military rulebook. During  the  years  1928-1941  Hungarian  military  officers  from  the  Ludovika Academy  began  to  research  earlier  combat  techniques  to  be  used  in  the training of the newly formed special operation branch. This research was later continued  and  further  developed  by  Ferenc  Vukics  at  the  Kossuth  Lajos Military Academy in 1991, and the first team was organized in Szentendre in 1996. The Hungarian Baranta Association was established in 2002.

Baranta: the word can mean the way of people exercise the forms of fighting, without the intention to hurt or even kill the other party, according to Ferenc Vukics, the president of the Hungarian Baranta Association, major and officer, teaching at the University of National Defense. I had the opportunity to speak to him personally, trying to find out the essence of Baranta and the way people think about this movement.

Recently how many members are known as being part of the Baranta community?

I can say that at around 2500 people are known as dealing with Baranta, and besides Hungary there are 16 Baranta teams in Seklerland (Romania), and several other teams are present in Upper Hungary (Slovakia), Délvidék (Serbia), the first team has also formed in Kárpátalja (Ucraine) and Hungarians in Germany, Switzerland, USA New York and Los Angeles are forming their local community as well. I have to line out that although mostly Hungarians are driving this movement, we know Japanese people or Germans who were quite attracted by us, and also people who are somehow related to Hungarians (e.g. mixed marriage, like Tibet-Hungarian) were also visiting our training sessions and events.

Can we talk about an average age among Baranta members?

We have members form the age of 3 to the age of 70. There is a tendency that mostly university students and high school pupils are forming the heart of the movement, but we have many older and even elderly persons who are taking an active part, just like the smaller ones, who start to learn in kindergarten, then continuing in elementary school.

What can we call a motivation these people have in common?

This is a good question we still would like to find out. There are people who have seen a Baranta team when performing, or heard about the aims and philosophy of the movement to which they can relate their personal values. Some people say it is quite easy to attract people or even win performing competitions with so many tools, weapons, and the spectacular elements we can work out, which all have a magical effect to the observer. I saw the magic in peoples’ eyes when crying during a live history performance at the National Gathering of Hungarians in Bösztörpuszta a few years ago. These events try to reconstruct our history making a relation to the present. It can also be the relation people have with traditions but Baranta has a different approach to this topic.

What is this approach? What makes Baranta different from other tradition-seeking organisations?

Baranta takes tradition as entirety. We don’t want to show only a historical period to the people, we want to show the entire life our ancestors had, with their values, which are evolving and changing to these days. It is a continuous finding, an ongoing work of collection we have to add to and recreate, because this is how it can live further. If I have to characterise Baranta, it is the personal freedom which is really important for a Hungarian, the community, the lack of central control, the need for localising these movements, the social sensitivity to each other which form the core of the philosophy. Who is a member of Baranta, doesn’t only act in the martial sports. They also dance, sing, read and write poems, take part in folk games, and finally, collect pieces of folkloric art from several parts of the country and history. We want to form a community of a nation which is precious due to its diversity. The diversity coming from all its unique personalities. We have to respect and be proud of our heritage but also have to show an openness towards other cultures. It is not just a sport, or martial art. It is the forming of the personality, the process of becoming an adult through physical, mental and psychical challenges.

During my research and conversation with Ferenc Vukics, I can come to a conclusion that Baranta doesn’t cover only the martial arts heritage. It can be sport, culture, folklore, self-training, and all in all: a way of living. A person who practices the philosophy of Baranta lives, thinks, fights, dances, and sings like a Hungarian. They have a well developing methodology, which is followed by high interest in schools, in order to be applied in sport classes. They have their own trainings, which means that only the person with the appropriate qualification can become a Baranta trainer. Yet, the movement is not supported by the government, which means they are struggling to build their institutional background, which would mean a kind of modern system of Baranta schools which would attract the youth of the 21. century. It was a unique experience to talk to Mr. Vukics, who shared with me not only the basic information about the movement, but also valuable philosophical thoughts. You can check their history and recent activities including upcoming performances, events and educational programs on their website or in the short presentation they have prepared in English.

Windies Cricket: Birth of a legacy