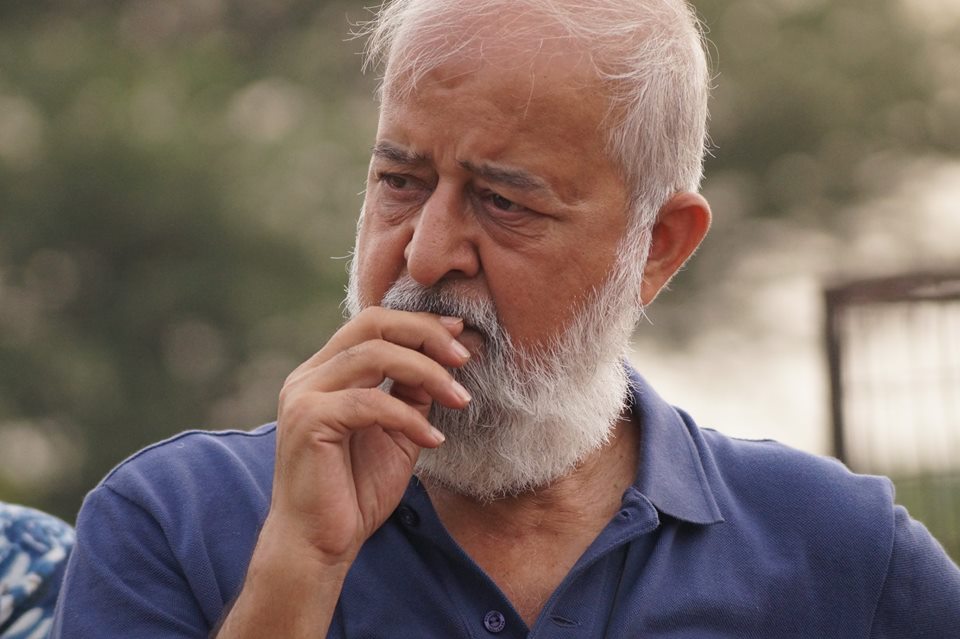 Historian Sohail Hashmi is a true ‘Dilliwalah.’ An academic, historian, academician and filmmaker, Hashmi is well-known for immersive heritage walks that he conducts around the capital.  Dressed in a refreshingly crisp Khadi shirt, he carries the air of old Delhi with him. Besides being a historian, Hashmi is a memory keeper- a narration of his lived experiences would leave you craving for more. In a conversation over a cup of lemon tea, he takes us on a historical trail. Interestingly, his history and the city’s history are inextricable. Excerpts from the indelible conversation:

Your family has been a witness to many faces of Delhi, down the ages. Tell us something about your family, its association with the city, and your early life in Delhi.

According to the family tradition, our forefathers migrated from Kashmir to Delhi. It could also be that they first settled in Agra, and then moved to Delhi when Shahjahan decided to shift the imperial court to Delhi. Kashmiri Pundits, like the Kayasthas of U.P. , learned Persian and some became scholars of Persian too. They also knew Sanskrit and were thus recruited by the court to translate Sanskrit texts and property grants to Persian, the language of administration. Many Kashmiri Muslim families settled in Delhi as well. My ancestors lived in the Kashmiri Katra, which was demolished after the rebellion of 1857. After exiling Bahadur Shah, the last Mughal emperor, the British occupied the Red Fort. But they soon realized that they were guarded by hostile natives on three sides and the Yamuna river on one side. This threatened them and they decided to clear out 500 yards of land to allow a straight line of fire to quell future rebellions. The settlement that covered this area was reduced to dust within the next 48 hours.

My great-grandfather, who was a teacher of Urdu, Persian, and Arabic, settled near the Sunehri masjid. Then the family shifted to Kucha Chelan near the Kashmiri gate. I remember the house we lived in. From my house, I could see Sultan Singh’s haveli. The haveli is still there, but I don’t know what happened to the house. There were large havelis belonging to the Mughal nobility in this neighborhood. Ours was not a traditional haveli. It was built by the British. I vividly remember the series of arches we had in the drawing room. I remember going to Nicholson garden for morning walks. In the Kashmiri gate wall, there was a small window, which was a shortcut to our house. We shifted to Aligarh in 1952, and we would come to Delhi during the summers. We came back and settled in New Delhi in 1964.

How did you develop an interest in the heritage of the city?

When we came to Delhi during the vacations, we visited the monuments and ruins like the Qutab complex, Hauz Khas, the mango orchards, etc. Later, when we came back to Delhi, I and my friend would walk through the alleys and bylanes of Old Delhi to discover the city. It was a regular thing after college. We would walk down the Northern ridge and take different routes- baraf khana, grain mandi, pili kothi, khari baoli ….and so on. My friend was a resident of the Old city and thus, he knew the streets well. It was during these walks that I started exploring the city and its cultural heritage. Also, my father joined the department of Archaeology at Aligarh Muslim University. He was a part of the team that conducted the Atranjikhera and Kalibangan excavations. He would visit us during the weekends, and if the weather was fine, he would take us around and show us the ruins in Delhi. His theme was the dome, the arch, and the minaret, and their evolution  from the 12th to the 16th century. This piqued my interest in Delhi’s heritage.

The Old city that grew around the Mughal fort-palace still offers a sneak peak into the erstwhile lifestyle of the residents. How has been your experience in the old city, in cultural terms?

Dilli’s culture had faded out to a great extent by the time we grew up. The popular leisure of kabootar-bazi was looked down upon in my family, and hence we never indulged in it. Kite flying was still a much-loved sport. One of my cousins, Mansoor, was a skilled competitor. When he flew the kite, news would travel and the other champions would appear on their respective terraces. Those who are regular flyers identify who is flying which kite, for they have distinct strokes and techniques. The Jama Masjid skyline would be dotted by innumerable kites. Mansoor was an excellent poet as well, he started explaining to us the works of Ghalib and Mir. ‘Mushaeras,’ by this time, had become a near extinct-phenomenon, except for the one organized inside the Red fort on Republic Day. Also, we had poetic gatherings at home- my father’s friends and colleagues would recite and sing their verses. Life in Aligarh was marked by such evening sessions.

You popularized the idea of heritage walk in Delhi, which is an excellent way to engage people in a dialogue with their past. You have designed exclusive walks for children as well. What do you tend to show them in the course of the walk?

When I’m out with the kids, I have to see the world from their perspective. I cannot tell them about the dynasties and the complex political histories associated with a monument. The motive is to get them interested in knowing their city, its environment, and its history. I usually take the kids to Tughlaqabad- I tell them about the rock formations, they might not be able to comprehend their age in millions but they certainly get a sense of time. They can walk on the ramparts, run down the steps in a baoli, and see creatures that they have never seen- a mongoose or a Nilgai, or something as simple and beautiful as a pupa turning into a butterfly! The objective is to excite their interests.

What were the public spaces in Delhi from the earliest times and how did the people use them?

One of the early public works that survives till this date is Hauz-e-Shamsi. Both Hauz-e-Shamsi and the neighbouring Jahaz Mahal were built by Shams-Ud-din Illtutmish, the Mamluk sultan. According to a legend, the Prophet had appeared in his dream and ordered him to built a tank for the benefit of the people. It is believed that the location of the tank was marked by a rock that has an imprint of the hoof of the Prophet’s horse. Two natural springs were diverted to fill water into the natural depression. The lake became so mighty by the third year that excess water had to be carried to the Naulakha nala, a pre-existing stream. People from Mehrauli never caught fish in Hauz-e-Shamsi for the sacred significance of the place. In fact, on the fulfillment of their wishes, they came and released fish in the tank. This was the site where the ‘phool walon ki sair’ festival was organized. The place would come brim with life during the festivities, there would be fairs and swimming festivals… I met a woman in her fifties who participated in the swimming competition as a young girl. Akbar Shah II commissioned the construction of two baradaris (pavilions) to shelter the Begums from the torrential monsoon rains during the festivities.

19th century Company paintings depict a stream and a causeway that connected the tomb of Ghias ud-Din Tughlaq to the fort of Tughlaqabad. This area too was a  public space. The ruins at Kilokri would draw a large number of people. It had become a popular picnic spot for the Dilli-walahs by the reign of Farrukhsiyar (1713-19) and the poet Jafar Zatalli describes the pleasure gardens of Kilokri using vivid images. Such contemporary works say that the elite left their wives behind and spent time with their boyfriends in these pleasure gardens. We have references to same-sex love in Hauz-Khas complex too. In our childhood, tonga ride was an integral part of our visits to Hauz Khas. The Mango orchard of ‘Andheriya bagh,’ aptly named so because sunlight could not penetrate the thick foliage, was a must visit place during the summer months. People would swing in the orchards, soak and eat mangos, and make merry. Dilli-walahs would bring along their traditional monsoon food- besani paranthe, minced meat, and green chilies, and the vegetarians would eat puri-subzi. The Delhi regatta took place in winters. I remember going to the Eastern Yamuna Canal to witness the annual boat race.

How were public spaces organized inside the walled city, i.e. , around the Red fort?

I remember a learned Kashmiri Pundit, who is in his nineties now, reminiscing about the Khari baoli (the stepwell, not to be confused with the bazaar!) in Shahjehanabad. Its water couldn’t be used since it had turned brackish. Every evening, they would burn traditional incenses like ud and amber to drive out mosquitoes. Young men would sit on its steps in moonlit nights and play chess. The bazaars were very interesting places too. Dargah Quli Khan writes about Chowk Sadullah Khan in his account ‘Muraqqa-e-Dilli.’ It was an octagonal market organized around a fountain and was established by Sadullah Khan, Shahjahan’s prime minister. Known for its aphrodisiacs, perfumes, and superbly crafted carpets, it was destroyed in the aftermath of 1857. You would still find magicians and mendicants, tribal people selling herbal medicines and aphrodisiacs, in the bazaars of Chandni chowk.

After a mesmerizing hour of questioning and listening, I realize that one session is not enough to sail across seven cities, especially when you have a sailor as interesting as Hashmi.

An Excursion to Bangalore Cantoment