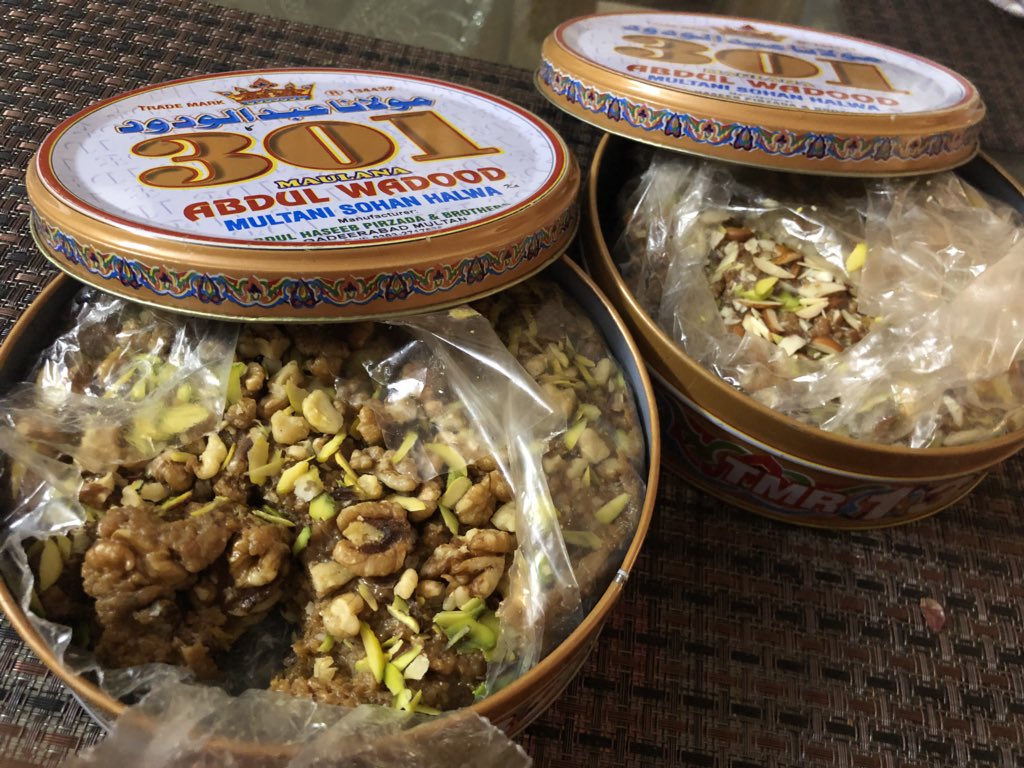 I recently went to a handloom and handicraft fair where I purchased Sohan Halwa from a Rajasthani merchant. I hadn’t intended to purchase it at all- I was conversing with the man to learn where he was from and what kind of sweets he was selling. While doing so, the merchant handed me a small piece of Sohan Halwa so that I could taste it. This was my first interaction with Sohan Halwa and it tasted sweet. But it was a different kind of sweetness, a lot more robust than the kind of sweetness you get from sugar. It almost tasted like a jalebi (a deep-fried Indian desert), but far more dense. But what attracted me to Sohan Halwa was not the taste. In fact, it was its appearance that fascinated me. The surface of the circular disks had been decorated with various dried fruits that formed a curious and colorful mosaic pattern.

Sohan Halwa is round and disc-shaped in appearance. It is produced by boiling a mixture of water, sugar, milk and wheat-flour. The mixture is boiled and cooked on a low heat, after which sugar and ghee (clarified butter) is added. Unlike most halwas produced from South East Asia, Sohan Halwa is solid. When the mixture solidifies, nuts such as walnuts, pistachios and almonds are added.

Like many food customs and traditions, Sohan Halwa’s origins are disputed. Some say that Sohan Halwa was invented in Multan, Pakistan, while others say that it came into being in Delhi, India. However, Shakeel Ahmad explores a legend that states, “Sohan Halwah was prepared for the first time by a Hindu confectioner named ‘Sohan’.” According to the legend, “Sohan purchased some milk for his sweets, but the milk went stale. Instead of draining the stale milk, Sohan chose to experiment with it. He put the milk on flame, and as the milk started getting thicker, Sohan added in some wheat flour to make it even more dense. Before long, he had on his hands a new, unique and delightfully sweet dish. Sohan went on to distribute it among wayfarers and locals. Soon, the demand shot up and everyone thronged to Sohan’s place for the new delicacy. Sohan also presented the halwah in the court of ruler Deewan Sawan Mal, where his innovation was duly appreciated, lending even more popularity to him and his product.”

Another one attributes the invention of Sohan Halwa to Deewan Sawan Mal, the Governor of Multan in 1821, appointed by Raja Ranjeet Singh. However, another legend that also attributes the innovation of Sohan Halwa to Deewan Sawan Mal claims that the Governor named the halwa after himself- “Sawan Halwa” in 1750. This halwa was given to royal visitors and friends, and thus was introduced to the rest of the Indian subcontinent by the Mughals. Over time, this halwa came to be known as “Sohan Halwa.”

However, some sources also suggest that Sohan Halwa has its roots in Iran. The Halwa was supposedly named after the Iranian city, Sohan from where confectioners traveled to Multan, which was a popular trading center at the time. From Multan, Sohan Halwa was introduced to other parts of the Indian subcontinent. Having said this, historians are not able to asses when exactly Sohan Halwa was introduced to the rest of the Indian subcontinent. While most historians believe that Sohan Halwa spread to Mughal India in the 18th or 19th century, a few historians have suggested that Sohan Halwa’s popularity advanced across India under the Mughal Emperor Humayun in the 16th century as well.  Despite its ambiguous origns, Sohan Halwa is very popular across South East Asia, particularly in India, Afghanistan, Bangladesh and Pakistan.

This sweet meat is emblematic of Multan, Pakistan. The poet and historian Shakir Hussain Shakir points out that the production of Sohan Halwa has only been commercialized recently. Before this, people usually produced Sohan Halwa in their homes. Even now, Sohan Halwa is prepared in the homes of the residents of Multan, who present it to guests. Shakhir also believes that the tradition of sending Sohan Halwa to family members in different cities began when the daughters married into other cities, both within Pakistan and across the world.

Today, many vendors produce Sohan Halwa in South East Asia. These include the likes of Hafiz Halwas, that have been selling several varieties of halwas since 1963. Traditionally a winter dish, Sohan Halwa is now produced across the year.

Want to make your own Multani Sohan Halwa? Follow the recipe below:

Method to prepare the Multani variant

A brief history of Kolkata