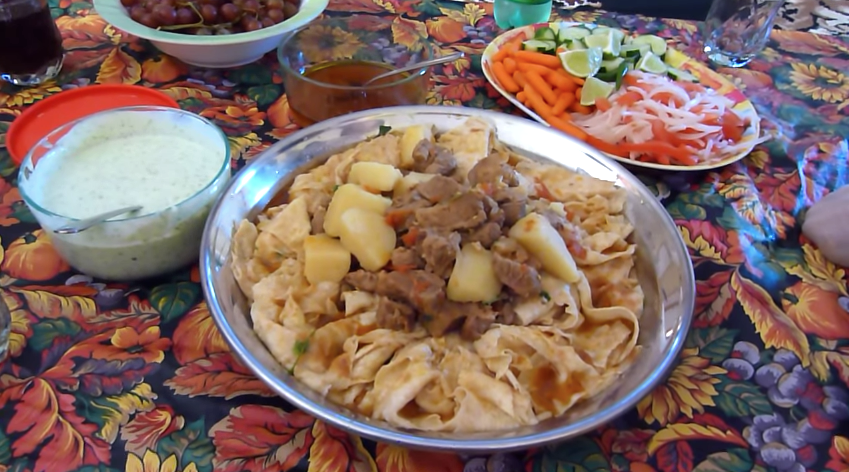 Sohbat is a popular traditional dish of this region, comprising of desi chicken curry and chappatis, and garnished with fresh salad or chicken pieces.

Dera Ismail Khan, the southernmost district of Khyber Pukhtunkhwa is home to various ethnicities, cultural norms and traditional cuisines. Though there is poverty, but the community is welcoming, hospitable, and considers it culturally inappropriate if a guest is not served well.

Sohbat is a popular traditional dish of this region, comprising of desi chicken curry and chappatis, and garnished with fresh salad or chicken pieces. The dish is served on special family get-togethers, important occasions or while welcoming a guest. It holds a symbol of respect and unity among the inhabitants which is at par with the pulao (a popular South-Asian rice dish) which is usually served at weddings. Sohbat is also known as painda or subut in different areas of the district.

The curry is called shorba, thin in consistency and similar to a chicken stew so as to be able to completely moisten the shredded, paper-thin chappatis on which it sits, traditionally called maaney. The maaney are  made without using a rolling pin, and are cooked on tawas or tabis (circular stone slabs).

Watch a wonderful video of maaney being made here.

Maaney can rightly be said to be the bread of Dera Ismail Khan as it is cooked in almost every household.

As is the case with most South Asian curries, the shorba is prepared by frying thinly-sliced onions to a golden-brown, then adding chopped tomatoes and spices such as turmeric, red chillies, salt, garam masala for flavoring and color. Meat and water is added to make a broth. The meat is then taken out of the curry after it has turned tender and deep fried separately to a golden-brown. Alternatively, the shorba can also be prepared with red meat or mutton, depending on individual preferences.

Presentation is a unique part of this dish: the maaney are taken and shredded into a thaal (circular steel plate with raised edge usually used in India and Pakistan for kneading dough). Next, the prepared shorba is poured evenly over the shredded maaney to the extent that they are moist, but not watery. This is followed by garnishing, during which the meat is placed on top of the dish. Fresh salad is sometimes added or it can be served as a side-dish. Raita or chutney is a must alongside the dish.

The dish is mostly followed by a cup of green tea with jaggery.

Due to Dera Ismail Khan’s strong adherence to norms and symbolic values, the importance that sohbat holds does not appear to be diminishing any time soon, rather sohbat does happen to make a mark on tourists who appreciate Pakistani food.

Does Sardinian food hold the key to longevity?