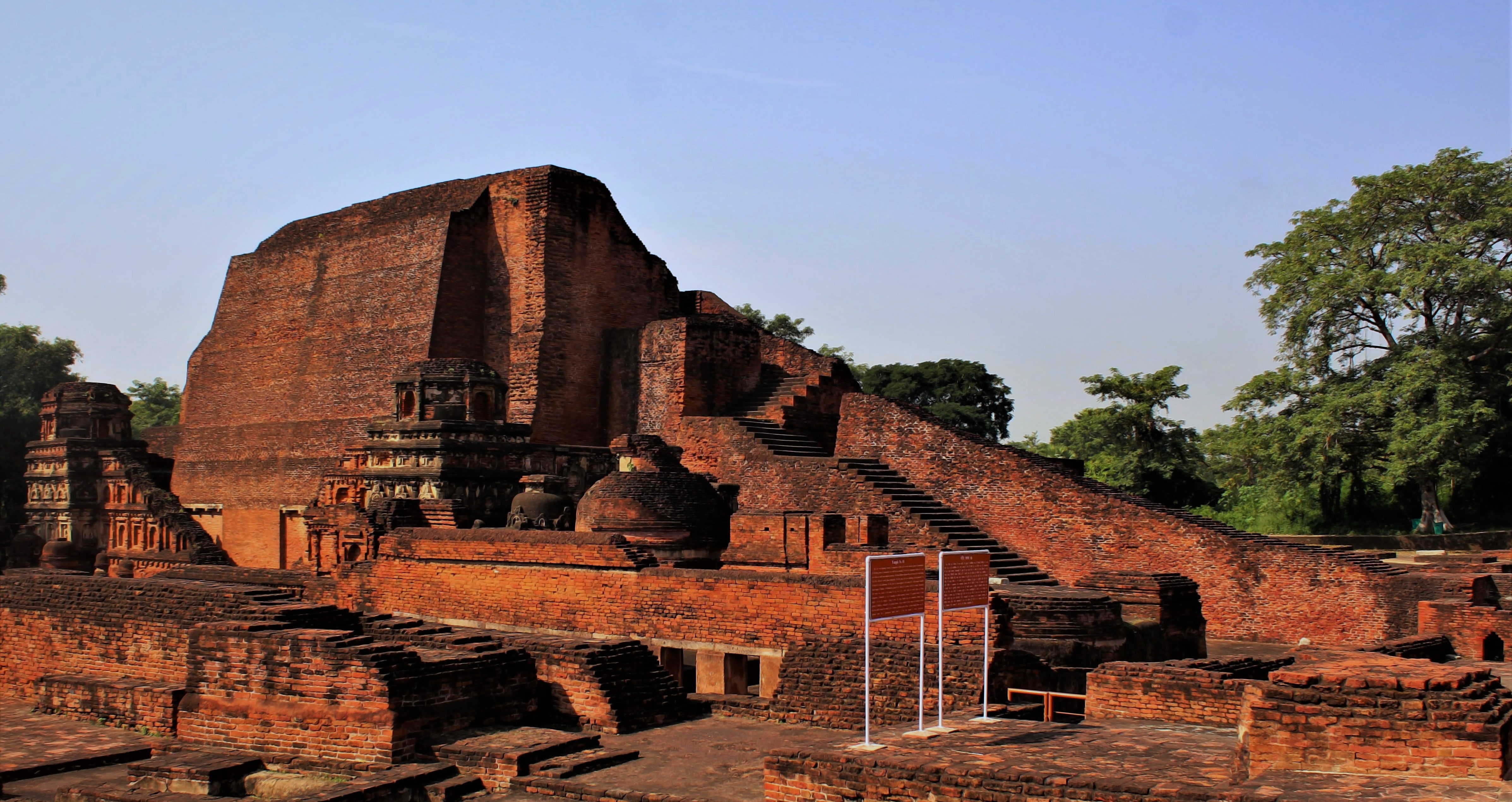 What about the old one? It was destroyed in 1193 CE by the invaders and today you can see the remains only. It’s called Ruins of Nalanda University, currently well-maintained amidst a lot of open green spaces by Archaeological Survey of India (ASI). It attracts a large number of visitors from all over the world and recently (2016) it has been declared as a UNESCO World Heritage site.

Even after centuries of invasion and depletion of the structure, the ruins and the site still stand as a symbol of India’s glorious past. If you are inclined towards ancient Indian education and architecture, then a visit to the Ruins of Nalanda University must be on your travel list. The site would take around 2-3 hours to cover completely (although it depends on the person visiting, I have seen people who say that there is nothing to see in these ruins and can be wrapped up in 15 minutes). For me, it took around 2 hours. Just opposite to it you can see the Nalanda Archaeological Museum, which will take around 1 hour. Additionally, there are some other tourist spots (Black Buddha Temple is a must see) nearby and small refreshment stalls. So, while planning your trip, keep aside 4-5 hours for this place.

NALANDA – A MONASTERY OR A UNIVERSITY

Situated in the Ancient State of Magadha (a part of modern-day Bihar State in India), Nalanda was a ‘Mahavihara’ (i.e. Great Monastery) – this term is used in almost all inscriptions on seals and copper-plate charters. Then why do we call it a University?

Well, the term ‘university’ didn’t exist that time. The term ‘university’ derives from Europe’s oldest university Bologna, founded in 1088 CE and chartered in 1158 CE. Nalanda was at its last stage that time and completely destroyed in 1193 CE. Foreign students in Bologna, grouped by nationality, hired scholars to teach them. This created an association of students from diverse nationalities, thus creating a ‘universitas’, which is the origin of the word ‘university’. Nalanda also attracted monk-students from places outside India, such as Japan, Indonesia, Persia, Turkey, China, Korea, Tibet etc.

Aren’t these enough to call Nalanda a university? Off course they are when you talk in the context of a time 1500 years back.

In the 19th century, Dr. Francis Buchanon-Hamilton, a British officer, identified the site. Sir Alexander Cunningham, the founder of ASI, surveyed and provided a complete description of the site in 1860s. ASI began systematic excavation in 1915-16 that went for 20 years. The excavations have revealed evidence of construction on this site over different (at least three) periods.

One should explore the Nalanda Archaeological Museum (maintained by ASI) just opposite to the heritage site to see a rich display of sculptures, coins, seals and inscriptions that were conserved from the ruins.

The actual origin of Nalanda is however unknown, probably it started as a small monastery dating back to 6th century BCE. It, however, rose to its statute in 5th century, a millennium later. According to Xuan Zang (Hiuen Tsiang), one of the Buddha’s two closest disciples Sariputra died at the town of Kalipinaka about 30 kms from Nalanda. He states that Mauryan Empire Ashoka (269-232 BCE) built a Stupa intended for Sariputra’s remains. The main Stupa (Stupa 3) is claimed as Sariputra’s Stupa.

Nalanda’s establishment is generally credited to the Gupta Period (240-550 CE) because of the archaeological evidences obtained from excavation like seals of the Gupta kings. As per ASI, the founder of the university is Shakraditya or Kumaragupta I (413-455 CE). Xuan Zang also credits Shakraditya for building a monastery at the place. However, seals found during excavation suggest earliest royal patronage for Nalanda during the last quarter of 5th century, when Buddhagupta (476-495 CE) was the ruler.

Initial round of destructions: Some believe Mihiragula (or Mihirakula), most important ruler of Alchon Huns, who ruled between 502-530 CE attacked and partly destroyed Nalanda. It seems believable because Mihiragula was extremely cruel and ruined several Buddhist sites. Many believe that Nalanda was destroyed by Shashanka, the king of Gaud (part of Bengal) in early 7th century.

After initial rounds of destruction, Nalanda was re-built by King Harshvardhan (606-647 CE). Seals of Harshvardhan have been discovered from the excavation, indicating his patronage for the monastery.

A vast majority of stone and bronze sculptures at Nalanda are from the Pala period (8th-12th century). The Pala dynasty rose to power in eastern India, ruling much of modern-day Bihar and Bengal, in the 8th century. The Palas were Buddhist. Second Pala king Dharmapala (781-821 CE) and his successor Devapala (821-861 CE) are two important names in this context.

Final destruction and “end” of Nalanda: The decline of this great institution started in later Pala period but the final blow came in 1193 CE by the invasion of Bakhtiyar Khilji. Almost every historian attributes the “end” of Nalanda to Bakhtiyar Khilji, Afghan military commander of Qutb-ud-din Aibak. The report on this invasion comes from the Persian history Minhaj al-Siraj’s Tabaqat-i-Nasiri. It reports that in 1193, Khilji organized an attack on the fortified city of Bihar and most of the inhabitants were killed. Within the fortress there were many books and upon enquiry Khilji learned “that the whole of the fortress was a college”. There is, however, some confusion on whether Khilji ransacked Nalanda or some other monastery in Bihar Sharif. Whatever the case may be, it’s almost certain that his military invasion destabilized the region that in turn made very difficult for monasteries to survive.

HOW TO REACH NALANDA

You have to reach Patna / Gaya / Bakhtiyarpur first.

The nearest Airport is Patna, which is the capital of Bihar State. You can reach Patna by train also. Alternatively, you can reach Gaya by train. Both these stations are very big, and all the major trains between Kolkata and New Delhi either go through Gaya or Patna. Gaya also has a very small Airport, but only a limited number of flights operate from there and it’s not recommended.

People may also think of going to Kolkata directly by flight. From Kolkata there are numerous overnight trains which would reach Gaya in the early morning (Some would prefer going to Bakhtiyarpur Station, but as per my opinion Gaya is preferable as it’s bigger and cabs availability are higher).

Once you reach Patna / Gaya / Bakhtiyarpur, you have to hire a cab.

Bakhtiyarpur to Nalanda distance by road is 30 kms and would take 45 minutes.

The unique blend of South of Spain: Granada – city like no other