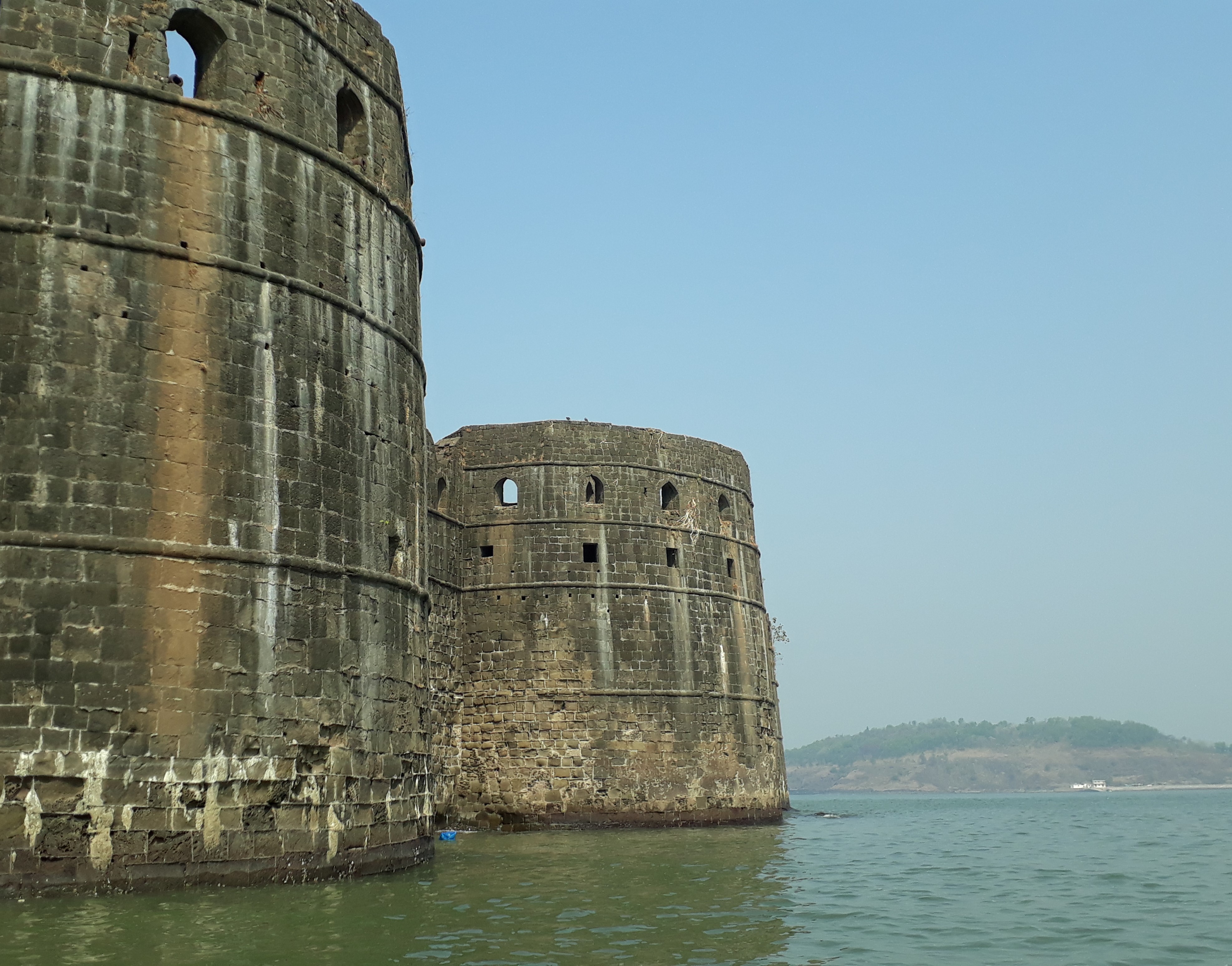 The sea fort at Murud-Janjira is one of the most unique and beautiful forts in India. It is situated in the Raigad district of the state of Maharashtra, and is surrounded by the Arabian sea on all sides. The fort is only accessible by sail boats from the coastal village of Murud.

The structure is built on a rock outcrop and has 26 massive bastions and high protective walls. Based on historical records, it is said that the fort was constructed by Malik Amber, who served under the Nizamshahi dynasty in the Deccan region. Subsequently, the fort went into the hands of the Adil Shahi dynasty and finally into the hands of the Siddis of African origin, who had uninterrupted control of the fort untill it was finally taken over by the Indian Government in 1947.

With its massive black granite walls which seem to be standing right on the water, the structure was inhabited by a large number of people, most of whose descendants still live in and around the coastal village of Murud. These inhabitants, known as the Siddis were Muslims, and hence we can see ruins of mosques inside the fort. Apart from mosques, there are large fresh water tanks that helped the inhabitants survive, without having to leave the fort for years at a stretch.

The fort can be entered through a large gateway which is built in such a way that it is not clearly visible until one comes within a few meters of it. The construction of the fort and its buildings appear to be crude, with very little architectural ornamentation.The real beauty lies in the clever military designs that the architects used to make the fort almost invincible.

The main buildings inside the fort include the royal palace, which is also the tallest building of the fort. The floors of this building as well as the roof have long since collapsed, primarily due to the fact that they were largely made of wood. But their strong granite walls have survived and are mostly intact.

The fort also contains a low hill, topped by various ruins which appear to be of military nature. There are various other buildings such as mosques, houses of noblemen, stables, houses of traders, storage areas, and  underground passages. Many of the buildings are interconnected, while some are separated by narrow streets that run across the width of the fort. Walking through the ruins makes it evident that there was once a fully functioning society here.

The Siddis strengthened the fort to great extents, and added a large number of heavy cannons and built a bustling community inside the walls. Today, only a few of the large cannons remain in place, and the largest of them is known as the Kalaal Bangdi.

It is said that these cannons helped the Siddis drive off attackers. Fortified to the teeth,  the structure could not be conquered by the Portuguese, the British or the Marathas, in spite of a number of attempts. The Marathas attempted to scale the high walls and even tunnel through the sea bed up to the fort but failed every time. The Marathas also built a smaller sea fort known as Padmadurg some distance away to serve as a base for attacking Murud – Janjira.

The fort was abandoned in the middle part of the 20th century, when lack of modern amenities,  dwindling fresh water reserves and extreme poverty made the inhabitants move to nearby coastal villages to look for employment. It is said that the people living inside the fort became so poor that they started to sell off doors and windows, carpets, utensils to buy food. Gradually the fort fell to ruin and over the years as the proud inhabitants were forced to leave their home for good, the once powerful sea fort became merely a shadow of its glorious past.