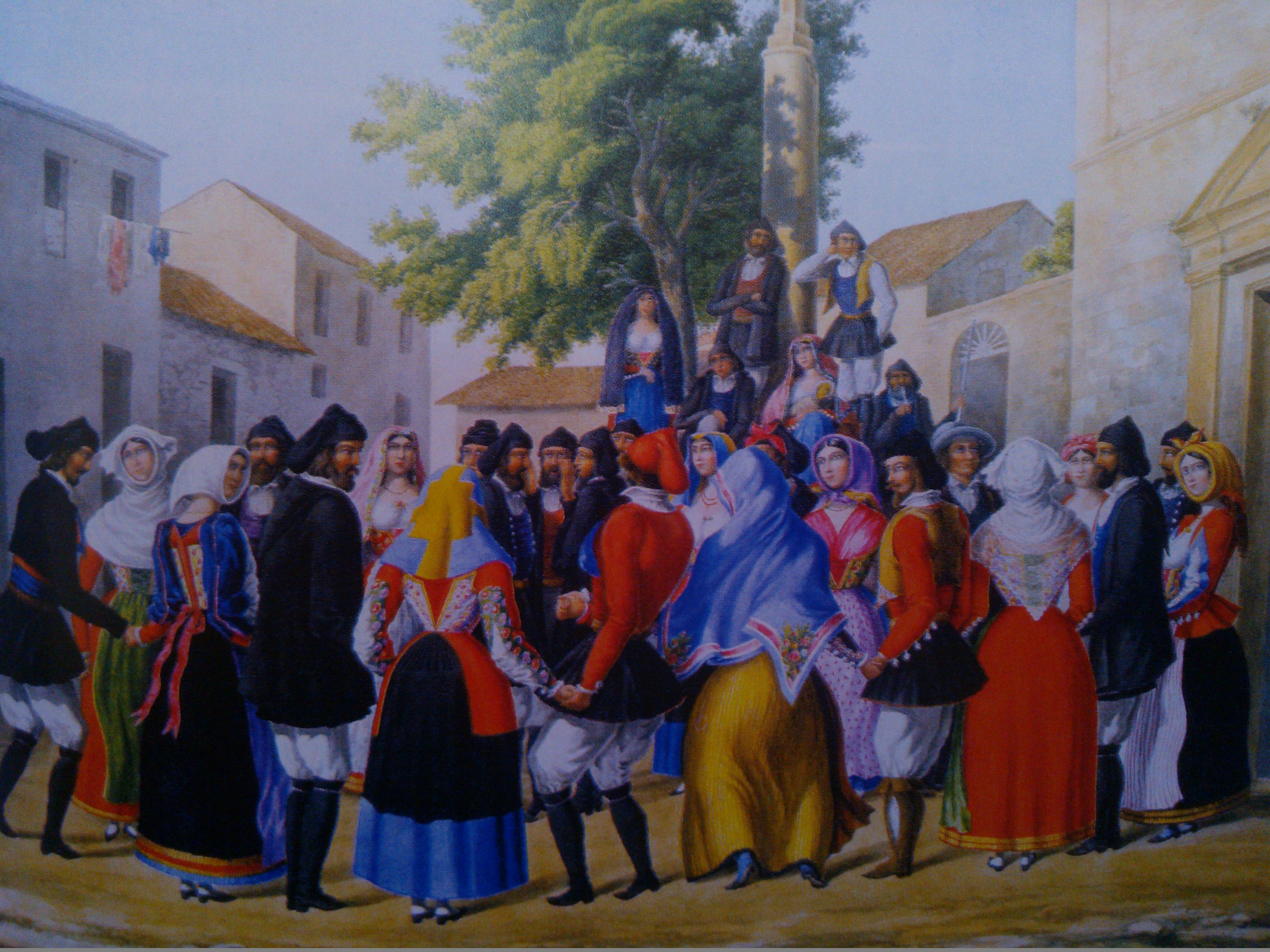 The dance, since primitive times, has played a key role in the life of the individual and communities highlighting the most important moments.

In Sardinia the historical sources about the folk dances are distant and different over time. The first document related to this expression of the folk tradition, is dating back to the Ozieri Culture (3200-2700 BC). This is a bowl from the altar of Monte d’Accoddi, near the town of Sassari. It is supposed that in the bowl is decorated a scene of dance where are represented four stick figures to hourglass form holding hands, almost forming a circle. Another interesting example concerns the shelf, near the apse of the Romanesque Church of San Pietro di Zuri (dated 1293), in the municipality of Ghilarza. This is the relief representation of a dance scene where are represented figures that dance held by the hand and it is assumed that this is “the first evidence of ballu tundu.”

These are just some of the documented examples that prove the attachment of the Sardinians at the folk dance and despite the work of Christianization carried on by the Church on the island, the link between dance and religiosity and between people and communities did not cease.

As of the end of 1700 and and then mostly in 1800, there are many court cases documents describing the “circular dance” and there are studies of many Italian and foreign intellectuals and travellers that practicing the “Grand Tour” provide interesting news about dancing through their travel reports and pictorial documentation.

In Sardinia the distinction between the two terms is clear and refers to treaties of the Renaissance period when scholars called “ danza “ performances in pairs, linked to courtship dances and “ballo” the interpretation made by more people forming a circle with random arrangement of dancers, linked to ritual dances. In Sardinia so the distinction between the two terms is mainly linked to the type of step that you perform during the dance. In the Sardinian Island the term “ballu”( in Sardinian language) “dance” is used to denote its most characteristic form : the “ballu tundu” (in Sardinian language) and also forms accompanied by songs are indicated by “ballu”.

This term seems to have a greater diffusion perhaps because it is linked to the oldest choreographic forms, like those in the circle. The “ballu“ word therefore has indigenous origins and older, the first organized forms of primitive dance have just precisely shapes of the circle and line. The traditional dance is an integral part of the Sardinian culture and over the centuries has undergone changes and alterations.

At first the traditional dance was linked to the town, to its moments of fun and play, to pagan religious rites but he has mostly covered an important social aggregation function. The party was seen as a moment of rupture of the social rules of everyday life, from the toil of work. Through the party and dancing, they were created opportunities for women and men meet to be together, because in everyday life was preferable that would not happen.

The dance in fact belonged to everyone and everyone could participate, was a source of joy and through it marked the most important moments of community life: births, marriages, the festivities for example.

Everyone participate regardless of their technical qualities of the dance and the common people did not consider this practice offensive or scandalous. The historical period between the two world wars was characterized by the progressive loss of tradition in sound and dance. Fascism then, to strengthen nationalism, repressed any manifestations of cultural identity.

Since the second world war, along with reconstruction there was a work of recovery and rediscovery of all forms of cultural identity, especially by young people that driven by the need to reinterpret the popular culture founded associations where there were elements of the past: the dance and the local custom, the union of men and women with new spectacular choreography.
In the years ‘ 50-‘ 60 was born in Quartucciu, near Cagliari, the first concrete example of mixed association: the folklore groups(folk), where people gathered to put on a show of popular traditions. These associations are present in every town and city. Today we can say that thanks to the folk groups and their shows, the Sardinian cultural tradition survives and is known abroad.

The “ballu tundu” is the most popular dance among the various sardinian dances and its characteristics are: the circularity, the flicker, the composure, the cries of joy.

Men and women put themselves in a circle, each holding the other by the hand “a manu tenta” (in Sardinian language) and sometimes you put around the musician who is at the center; this indicates the close link between who plays music and who dances. The dance unfolds with flickering movements.

It is supposed that the flicker is a rhythmic movement of purification, propitiatory and this triumph over the melody. Anthropological studies see in the circular dance a cultural manifestation of the oldest folk tradition tied to magic-ritual forms. The basic movement so it’s like a jolt that supports the rhythm and mainly involves the trunk of the dancers. The steps following the music beat and must be made seriously: the upper part of the body must be kept rigid, while the mobility is entrusted exclusively to the lower limbs.

The “ballu tundu” demanded a huge composure by the woman. The dancer keeps for the duration of the dance very seriously, as if she were performing a sacred ritual. According to ancient tradition, even during this time of joy and fun, the Sardinian woman must not lose its solemnity and respect but man could emit cries of celebration during the execution of the dance and danced proudly next to the woman who followed him in the dance.

Married couples or girlfriends could hold hands with fingers intertwined, but a man could not do this with a young girlfriend or another man’s wife. A stranger could enter the circle to the right so as not to stay between the woman and her husband.

My Rendezvous with The Potraj Community