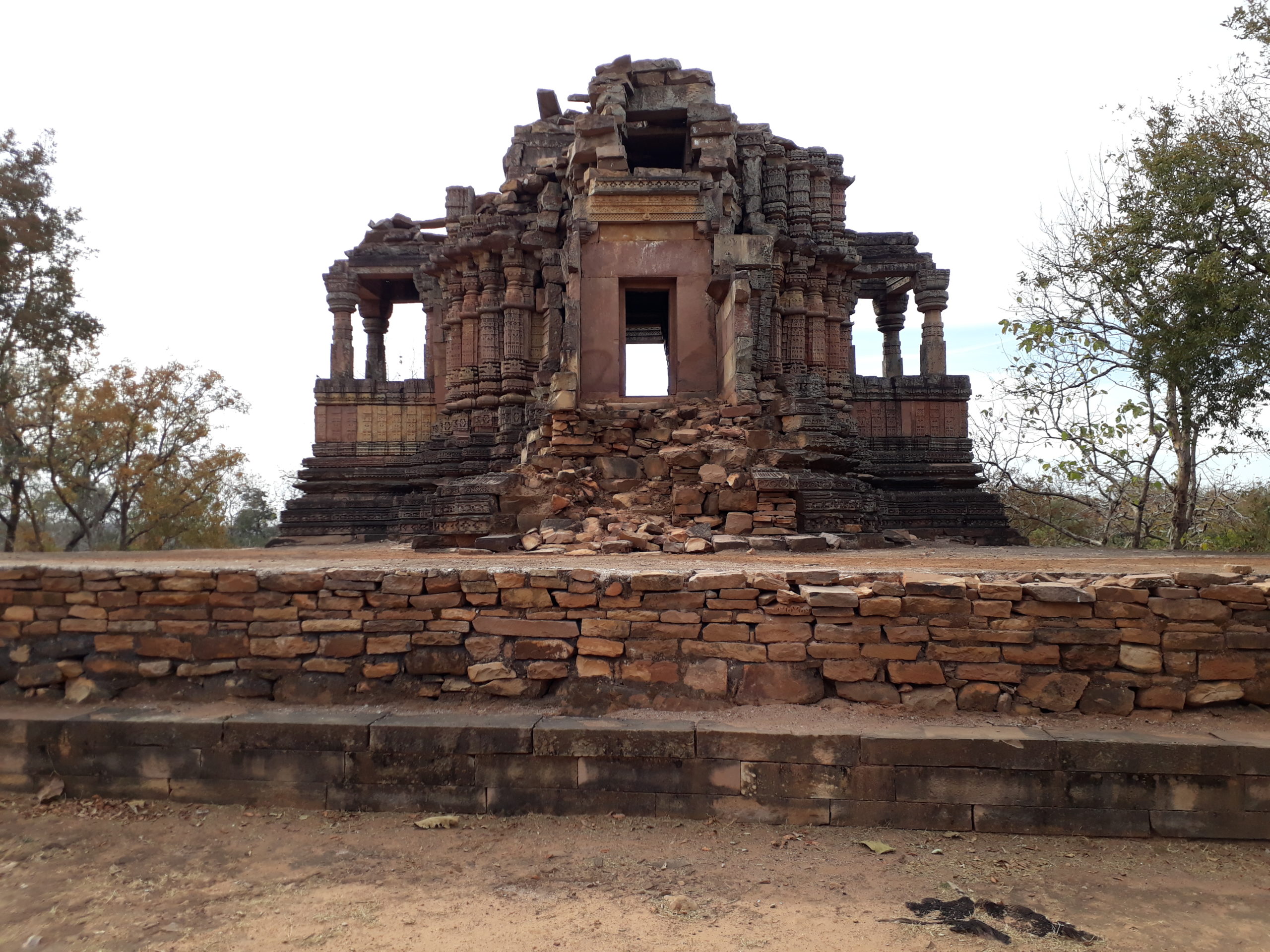 The Indian state of Madhya Pradesh is a haven for tourists from across the Globe. With its magnificent wildlife sanctuaries, its ancient temples and beautiful landscapes, its one of the most visited states in India. Being at the heart of the country, Madhya Pradesh has seen the rise and fall of multiple kingdoms in the past, each having left their mark in the form of temples, palaces or forts. One such fort is the Ajaygarh fort, in the Panna district of Madhya Pradesh, and not far from the UNESCO World Heritage site of Khajuraho. Rising high above the sleepy little village of the same name, the fort is nothing short of what adventurers and heritage enthusiasts dream about. Unknown to most tourists, who pass it on their way to or from Khajuraho, its a lonely place, waiting for someone to come and explore its forgotten splendor.

Situated at a distance of about 76 Kms from the center of Khajuraho, lies the village of Ajaygarh. A sleepy little hamlet in the shadow of a high hillock, with cobble stone streets and typical Indian village houses. As the curious traveler moves about the village, walking through its narrow lanes, he is constantly reminded that the hillock that overshadows the place has some deep secrets waiting to be unraveled. Talking to the locals only reinforces this feeling, as the traveler hears all sorts of stories about ancient kingdoms, wars and a massive fort that still exists on top of the hillock. The villagers come to greet the traveler in great flocks, like a group of tigers descend on a lamb that has been left behind by its herd. Each one has their own version of the history of the place, each version carefully crafted to suit the mystery surrounding the fort that gives the village its name. The traveler is instantly surrounded by a number of village kids each offering to take him to the fort atop the hillock for a little money. He can’t resist the adventure that lies ahead and agrees to one of the boys. Soon the rest of the villagers disperse and the traveler sets on his long journey up the hillock. The village road winds its way through the closely packed houses, passing the occasional ruined mansion or remnants of ancient stone walls. Along the way, the boy turned tour guide points out at old buildings every now and then, telling the traveler all sorts of stories. The road gradually rises above the village and transforms into a series of steps. The traveler is forced to slow down his pace as the path becomes steeper. Climbing for an hour or so, the ancient walls of the fort finally come into view. The walls are so badly ruined that its not possible to spot them from the village below. The noise of the village has long since faded and the air is now filled with an eerie silence, interrupted by the sound of the wind against the dry leaves of the ‘peepal’ trees that cover the slopes of the hillock. As the traveler approaches the massive Gateway of the fort, he is awestruck by its sheer scale and excellent state of preservation. This is one of the many gates that existed at one time and the only one in use, the others having been engulfed by the jungle. As he enters the fort, he steps back in time.

The Gateway of the fort opens into a large paved courtyard, with all sorts of ruined buildings surrounding it. The architectural style is similar to that of Orchha or Jhansi. Most of the buildings have lost their roofs long ago and only the strong stone walls stand as a reminder of its glorious past. As the traveler walks across the courtyard, the boy accompanying him shows him a great view of the village below from a large bastion at one end of the courtyard. The view is breathtaking and gives a great vantage point by military standards. It is said that the area was once ruled by Guman Singh,a powerful feudal lord of the Rajput clan,who had carved out a great kingdom for himself within the ancient province of Bundelkhand (Part of the modern day state of Madhya Pradesh). The independent state of Ajaygarh was officially established in 1756 and came under the British Empire, after the fort was captured by the British Army in 1809. Thereafter, the royal family continued to rule the area, as a Princely State (Semi-autonomous state loyal to the British Government). The fort was built over decades and had the royal family residing in it until water shortages and disease forced them to abandon the it and move to a newly built palace outside the village that lies at the base of the hillock. As the royal family moved out, the fort fell into disrepair. Being under the British empire, the fort was redundant as a military installation and only served as a pilgrimage site for the hundreds of villagers who visited the many temples within the fort premises on various religious festivals. As the traveler and his little guide continue their exploration, they travel further back in time.

Beyond the paved courtyard lies the vast expanse of the fort. Little remains of the majority of the buildings that covered this area, being build of wood. The area is overgrown with trees and the dead silence is interrupted now and then by the sweet chirping of a variety of birds. Nature has truly reclaimed this place. Following the damaged walls of the fort, the traveler and the boy reach a large stone tank, half filled with green water and topped with a generous layer of algae. The boy says that the seemingly peaceful tank is infested with crocodiles and that villagers don’t dare to go near it. Walking across one side of the tank, they reach a huge stone temple, that has partially collapsed. Though in ruins, the walls of the temple instantly catch one’s eyes. The detailed carvings, the exquisite sculpture and the high quality of craftsmanship, clearly indicate this to have been a very important shrine. As they enter the ruined temple, the boy informs that the main Idol housed in the temple was taken down to a new temple in the village after this one collapsed decades ago. Close to this grand edifice lay a second temple, larger in size, but damaged to a greater extent. The boy repeats the same story about this temple as well. The careful eyes of the curious traveler find bits and pieces of carved figures, broken stone lintels and fallen columns across the entire area. The boy speaks of many more temples that had fallen long back and could not be repaired due to lack of funds. It becomes clear that sheer neglect and not a siege, has brought the downfall of this magnificent fort.

As the walk continues, large stone foundations and ruins of walls come into view. These seem to be whats left of the royal palace. As the buildings within the fort started to collapse, villagers picked up stones and bricks to use in their own homes down in the village.With no one to take care of the place, large volumes of stones disappeared over the years, making any restoration attempts not feasible any more. After a few minutes of walking, the traveler and his guide reach a second smaller water tank, whose water is heavily polluted with all sorts of garbage. Upon asking the boy, the traveler comes to know that every year during special religious festivals, the villagers gather around the tank for ceremonies and dump flowers and other stuff into the water. It gives the traveler some peace to find evidence of human activity in an otherwise forgotten and otherworldly place. The fort continues beyond the tank for hundreds of meters but it turns out that its not safe to go beyond this point. “There may be tigers and poisonous snakes and villagers are afraid to go beyond this lake”, he says, with a clear sense of fright in his otherwise jolly face. The last rays of the setting sun have now been cut off by the dense jungle that covers much of the fort, and the boy shows the way back. The traveler, guided by his little companion, exits the fort through a broken section of the wall and follow a shortcut back to the village, through the jungle. As the last remnants of the walls disappear behind him, the traveler leaves with a great sense of satisfaction, having explored this wonderful place that has not yet become a bustling tourist destination, and still retains its mysterious charm.