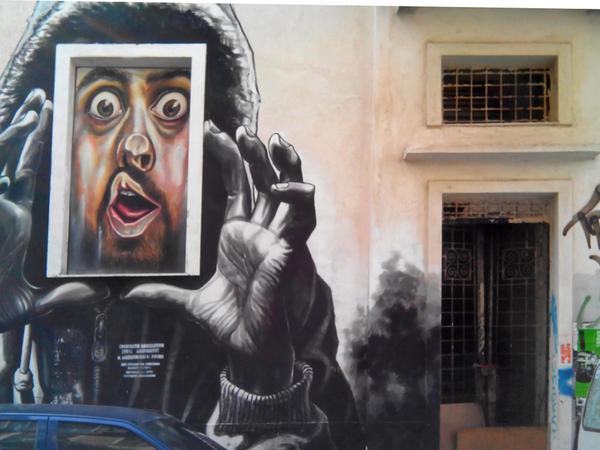 Upon your first visit in Athens, you can’t help but notice vibrant street art spread across the city. However, if you can ignore the out-of-control tagging that litters the city’s walls, you’ll notice that Athens is full of meaningful and impressive public murals and graffiti which brings to light the city’s true personality.

Being an ancient modern metropolis, Athens is said to have more street art than any other European city. From subtle outdoor murals to intricate stencils, paste ups and raw graffiti, the city is rich in urban art, which has really taken off and has formed its own distinguishing style over the years.

It is said that graffiti has a tendency to flourish in desperate times. And that’s the case in Greece too. The current economic turmoil has released loads of creative energy and has turned its capital into “a contemporary Mecca for street art in Europe,” as New York Times call it.

In the last few years, Athens has transformed into an open canvas for street artists from all over the globe. Their art has a flavor of artistic optimism, political reference and social satire. And while it may not solve the country’s compelling problems, street art has a way of dragging the public’s attention and conveying its own reformist messages and liberal ideas.

Meaningful art can’t exist without freedom of expression, and thus, for street artists, the city’s walls are the media to create spontaneous, rebellious, and free of bureaucracy art, available anytime to anyone. Clearly, this unsanctioned and passing public art is capable of gathering a lot of attention.

Unfortunately, street artwork can have a short lifespan. But it hasn’t discouraged a group of Conservation students in Athens who are seeking street art’s longevity and appreciation and have come forward to volunteer for its preservation.

Known as St.a.co (Street Art Conservators), the group comprises a volunteer team effort of more than 15 core members and many more friends and followers, including students, alumni, and professors of the Technological Educational Institute of Athens’ Department of Conservation of Antiquities and Works of Art, with a common interest the conservation and documentation of street art.

Three years ago, Lecturer Maria Chatzidakis and her students started scanning the city’s streets looking for graffiti art. St.a.co started as a framework for a university course focusing on the conservation of contemporary frescoes, graffiti, street art and murals.

‘’Beyond its aesthetic value, street art also has historical value. Over the years, people came, wrote or painted on a city’s walls is a historical element. Athens changes and transforms constantly and through preserving and documenting its street art, we save today,” said Chatzidakis, a co-founder of St.a.co and a lecturer at the Department of Conservation of Antiquities and Works of Art.

“Moreover, the street art presents a completely different pathology comparing to monuments and artworks that we usually study. It’s a new field that has a lot to teach the conservation community and inspire for further innovative research.”

‘’ Treating the city as our lab, we get familiarized with various different construction techniques and we experiment with new materials,” said Polyna Xiradakis, a recent conservation graduate and a co-founder of St.a.co.

“We are also conducting educational campaigns in secondary schools, introducing students to art and the science of conservation of street art, which is more familiar and reachable to them. Furthermore, we aim to encourage their engagement with art and its meaning in our modern society,” she added.

‘’If you want to learn about a city, look at its walls,” said iNO, a Greek street artist who aims to convey his own reformist and rebellious messages in this crisis-hit country. “People in Greece are under increasing pressure. Therefore, they feel the need to act, resist and express themselves,” he added.

So, rather than disapprove street art, shouldn’t we instead applaud it for being the only instinctive, liberal way of expressing our own common concerns and realities?

All photos courtesy of Maria Chatzidakis, co-founder of St.a.co and a lecturer at the Department of Conservation of Antiquities and Works of Art

Ancient Ruins of Ani in Kars Province of Turkey

India’s First Shopping Mall – is in the Red Fort!