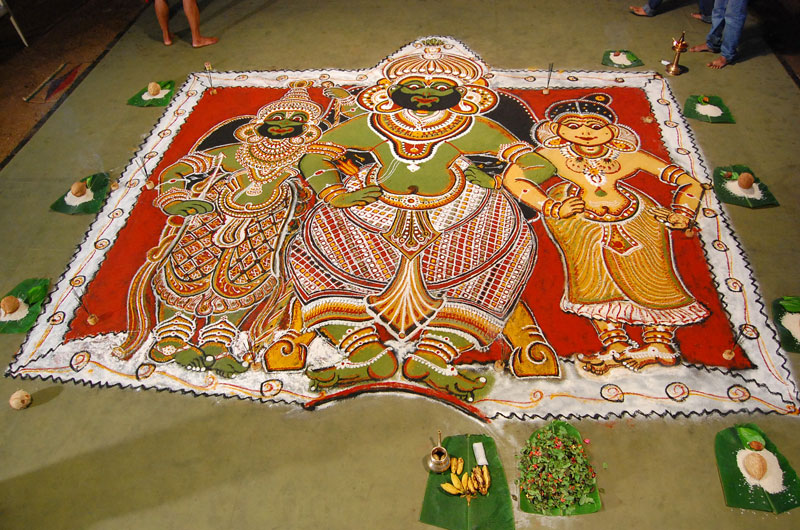 The fragmented origins of the ritual dance performed to honour Lord Ayyappan give rise to much healthy argument.

Lord Ayyappan is a popular Hindu deity worshipped in South India, especially in Kerala. The birth of Lord Ayyappan was a result of Hindu gods, Shiva and Vishnu’s Mohini form, engaging in the act of procreation. The God child was born from Mohini’s thigh, and was said to have possessed a heightened intellect.

There are 12 mythical stories which, when connected, seem to be an anthology of events preceding Ayyappan’s birth as well as a documentation of his rise to popularity in Kerala. Raman Nambiar, a skilled practitioner of the Theeyattu, says there are myths that can be traced back to before the 5th Century C.E. “The Theeyaddi community was established around the same time.”

These myths form the basis of the context of the Ayyappan Theeyattu. It is a sort of re-enactment of these myths by an Oracle, in the form of dance involving elaborate footwork. The Oracle is said to be possessed by the Lord himself during the ritual, but this is a totally disputable claim since it is of unfalsifiable origin.

The main ritual is 12-hour long, and involves the creation of a ritual drawing known as the Kalam, which is composed of organic materials. The Kalam depicts several myths, and is indicative of the figment of Ayyappan’s life being taken into consideration for the ritual. The making of the Kalam involves a large amount of patience, and embodies the ‘creation’ aspect of the Hindu pantheon.

The music during the performance is a process of chanting prayers, known as the ‘pattu’. The rhythms used in the Theeyattu are very raw and primal, and are said to precede the more complex musical tones in Kathakali. The para and ilathalam are some instruments used within the ritual to generate musical sounds.

“The ragas are very basic, compared to the newer, more complicated ones in Kathakali and other dance forms such as Kudiyattam,” said Nambiar.

However, the practitioners are wary of the decline in popularity of the ritual, saying that government efforts need to be sufficiently helpful. The decline in the number of active performers is also partially to blame

Hence, it is a sort of necessity to spread awareness of the ritual in order to preserve the cultural heritage of Kerala.

God in a Handful of Dust, co-authored by Karan Kumar and Shantanu Tilak for the Discover India Project
https://www.academia.edu/11889292/God_in_a_Handful_of_Dust_The_Ayyappan_Theeyattu