The Bhimbetka caves house the paintings dating back to some 15000 years but the enchanting encounter with the raw rugged beauty of the rocks themselves left me spellbound. The Bhimbetka rock shelters are not only the repository of ancient art, but they themselves are an outstanding examples of the exceptional beauty that nature provides in the form of the magnificent rocks.

Highly textured blocks of rocks, moulding into varying shapes entice our fantasy and a whole new world consisting of images of animals, faces, streams, and people open up before us. Put your imagination at work and the rocks can embody just about anything. It is not only forms but the formless, the abstract patterns painted on the rock canvas that impart them a beauty beyond words. The patterns are descriptive enough to suggest certain forms yet they are abstract enough to leave the interpretation to the viewers imagination.At places patches of uniform colors suddenly slides to an adjacent patch of entirely different color. 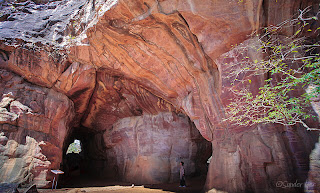 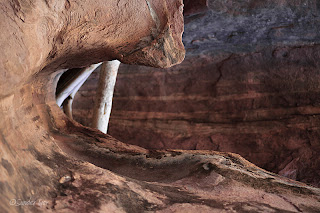 Now let me take you the world of Bhimbetka cave paintings.Historians and archaeologists  tell us that paintings at Bheembetka caves date back as early as 300 B.C. or even older than that. It is also said that these petrographs belong to  the periods of history stretching from Paleolithic to Medieval.

The clarity of images on the rocks filled me with a sense of wonder. What medium the man of that time was used to draw the pictures which provided them such a long life span ? Did they extract the colors from plants? Perhaps yes..only nature is capable of leaving such immortal imprints. Who drew the paintings? Did the women draw when men folk went out deep into the forest to hunt, gather food etc.?

These rock shelters must have been their home. Were these pictures drawn for decorating their homes or the pictures were drawn on the occasions of certain festivals,celebration, or for worshiping their deities? As I stood there trying to locate the various images on the mammoth size of rocks several questions kept on popping up in my head. The images do answer certain questions but it’s the charm of the unknown, the fathomless that make the experience so unique.

There are war scenes depicted in these paintings, battles between two armies, animals like elephants and horses used in war, the weapons, and paintings of soldiers on horses fighting with swords. There were depictions of figures dancing, playing instruments, celebrating  and then there are images of Gods and Goddesses. Such pictures convey socially relevant information. They create historically relevant documents. 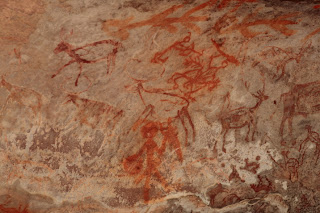 Man observes closely the things around him, he enjoys his observation and then out of these images he interprets life, and trains himself for the life. Man has always been interested in things around himself like plants, trees and animals.
These paintings are great works of art in the sense that they invite one to be inhabitant of those bygone times.The paintings revive and readapt the time and space and open doors to those strange and special times.