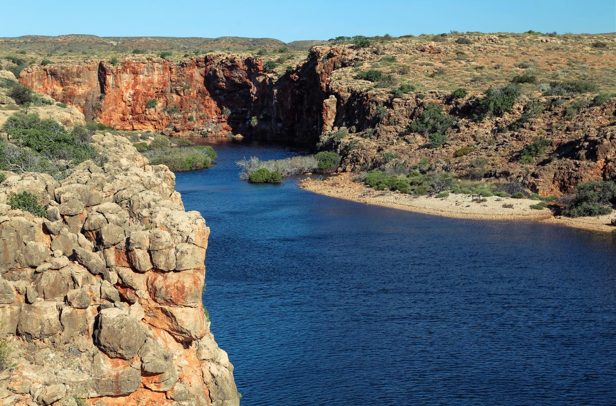 Along the Western shoes of Australia, one can find the Ningaloo Coast. It includes one of the longest near-shore reefs.

Aesthetically striking landscapes and seascapes are formed as a result of the interconnection between the East Indian Ocean and the arid coast. The coast is breathtaking because of its natural endowments which makes it to be teeming with life. As a result of the sustenance of both tropical and temperate marine fauna & flora with marine reptiles and mammals, the Ningaloo reef is said to be the most dominant marine habitat in the area. An extensive karst system, network of underground caves and water courses are the main terrestrial features of the Ningaloo coast. Only few of the caves and rock shelters have been explored and so many natural treasures are yet to be discovered.

The rich marine life means that one can often spot species such as the gentle whale shark, tropical fishes, turtles etc. It is one of the few places where people swim with the world’s biggest fish and this makes people travel long distances to have a glimpse of the whale shark. The greatest attractions seem to be the whale sharks and humpback whales, which can often be seen peering over the surface of water.

In 2010, Ningaloo Coast was nominated for world Heritage listing by the Australian Government with the assistance of the Western Australia Government which was created in 2011. The World heritage nomination indicates that Ningaloo Coast is internationally important for its role in the sustenance of an outstanding number of marine and terrestrial species.

With the tremendous features and unique significance Ningaloo coast truly deserves UNESCO world heritage listing. A glimpse will worth the journey.

Marveling at the raw beauty of the Ajanta Caves

The Fortified Town of Cuenca in Spain