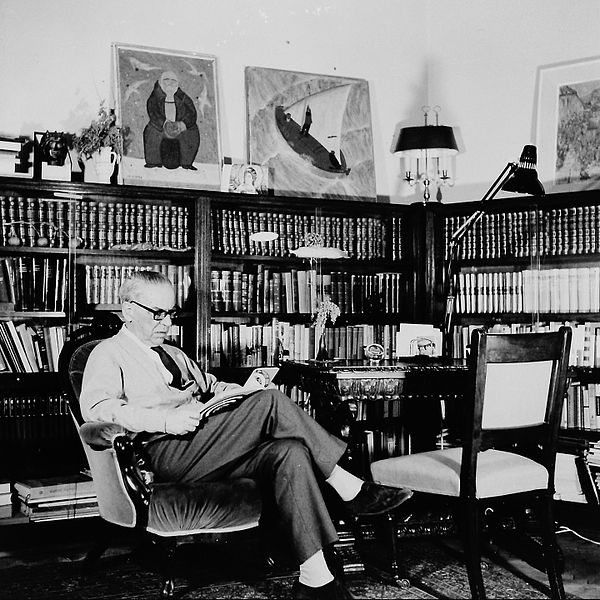 Even years after his death, Ivo Andric, the only Nobel prize winner from the Balkans doesn’t fail to surprise us.  The year 2017 marks his 125th birthday. On the occasion, an editorial house has decided to publish book with the essays of the famous writer.  Although Andric is famous for his novels that depict life in Bosnia under Ottoman rule, Ivo Andric left behind a  series of poems, stories and essays that show a completely softer side of the writer.

His new book of essays contain foreign writers such as Voltaire, Tomas Mann among others. What is interesting is the exclusivity of the texts, which is unknown to the wider public. Hidden behind the marvelous novels and amazing short stories is a writer who dared to write about writers, who described their tiring journey and got us closer to understanding their art.

For those who aren’t familiar with Andric or his work, he was born in 1892, in Bosnia, into a poor family, Andric had a difficult life. From his early age he joined groups of younger, educated men who were advocating liberation of the Bosnia from Austro-Hungarian Empire and annexation to Kingdom of Serbia. Having shown great talent for studying, he went to Krakow in June 28, 1914 to continue his education – the day that dramatically changed the history of Europe and the world. It was the day of the assassination of Archduke Franz Ferdinand of Austria, heir presumptive to the Austro-Hungarian throne, and his wife Sophie, Duchess of Hohenberg

He immediately returned to the Balkans, just to be caught and imprisoned by the Austrians. During that time he wrote, in my opinion, his best work, poems in prose, Ex ponto. Using simple words and short sentences (something he will later change to become one of the biggest masters of the long sentences that the Serbian language ever had) he showcases the life of young man in jail, torn by the thoughts of hardship of his mother, horrors of the war, and the platonic love that he felt for a girl in Zagreb. After the war, he got a job in the Ministry of Foreign Affairs. Through the years, Andric traveled all over Europe. All the cities and countries had some impact on his writing but he still remained loyal to Bosnia, a country that was an endless source of inspirations. He was a great connoisseur of the Balkan history (his PhD thesis is precisely about Bosnia under the Ottoman rule). The main focus in his work were the destinies of the individuals who were determined by the events much bigger than them. In 1941, he achieved the highest rank in service when he was appointed the Yugoslavian ambassador in Germany. After the Nazi attack on Belgrade and Yugoslavia, he returned to his country and retired.

Proving that hard times can bring something extraordinary, Andric wrote two of his masterpieces during the Second World War – Bosnian Chronicle and The Bridge on the Drina. For the second, he was awarded the Nobel prize in 1951. “For the epic force with which he has traced themes and depicted human destinies drawn from the history of his country”, was the explication. And that sums up his work perfectly. A great expert with humble appearance and laughter, Andric managed to tell a single story in many stories.

He died at the age of 82, in Belgrade in 1975. His legacy can be debated, analyzed or described in so many ways, looking  from so many different prospective and angles and would take years. I will not undertake such an endeavor, mainly because I do not consider myself an expert who can analyze this great author, but also because I want to leave you with the sense of fondness that will lead you to his books and his work. And I consider that to be his biggest legacy.