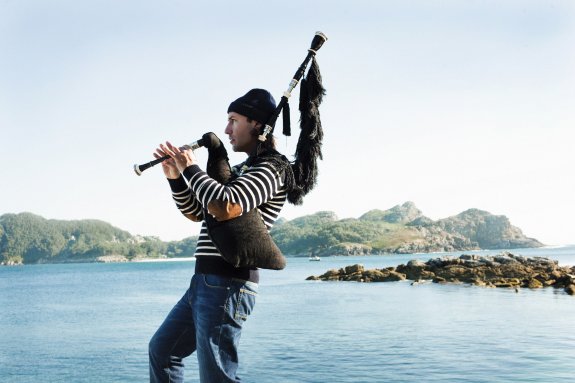 For people and cultures all over the planet, music has played one of the most important parts in artistic expression, cultural identity, and it has also been a simbolic way to mantain traditions and habits. Music is an essential element in discovering past civilitations and returning to their cultural origin.

The geographical situation of the Iberian Peninsula is a brigde between Europe and Africa with a great wealth and diversity of cultures. On the 1st century BC, before the Romans´ arrival- the Iberian Peninsula has occupaid by many diverse people. The Iberian were most likely the native population of Spain, occuppying the whole Iberian Peninsula, which was therefore called Iberia. However, many different people had migrated to Spain. Greeks, Phoenicians and Carthaginians settled along the Mediterranean coast. Celts, an Indo-European tribe coming from Central Europe settled in The Iberian Peninsula (Galicia and North of Portugal), Ireland and Britain.

While Scothland and Ireland are most commonly associated with Celtic people, the roots of the culture are spread troughout Europe. Galicia, which is in northwest Spain, is considered one of the seventh Celtic nations, along with Eire (Ireland), Kernow (Cornwall), Mannin (Isle of Mann), Breizh (Brittany), Alba (Scothland) and Cymru (Wales).

Galicia has many evidences of Celtic origins: a language with celtic influences – Galician -, pagan festivals and rituals, similar landscape, a characteristic architecture like celtic forts called castros, and of course similar music.

For some it is hard to imagine that some regions in Spain; like Galicia, could have so many similarities with celtic countries as Ireland. Both have an ancient musical tradition of Celtic origin. The sound of the Galician “gaita” – bagpipe – (the typical instrument from Galicia) is very similar to that of the Irish “uleann pipes”.

The history of Galicia cannot be understood without its music. Music helped to define Galician culture. Over centuries, successive migrations and invasions have brought musical influences from all of Europe. For example, the bagpipe is thought to have been brought by the Swabian peoples in the fifth century. The Camino de Santiago was also an excellent cultural exchange channel in Europe since Middle Ages. The pilgrim’s symbol, a scallop shell, is one of the most essential instruments of Galicia’s traditional music.

Galician bands are usually small which are composed of two pipers -gaiteiros-, two drummers and some tambourinists. The musicians played through a town or village. Dancers often accompany the musicians. They dance a traditional dance called muñeira. This dance originated because people were dancing outside and in the mills -muíños in galician- whilst waiting for the milling to start.

Nowadays, there are a large number of celtic bands in Galicia which mix traditional music with modern influences. Some of the most significant bands are: Carlos Nuñez, Berrogüetto, Cristina Pato, Mercedes Peón, Luar na Lubre, Milladoiro, Xosé Manuel Budiño and Susana Seivane.

If you want to discover more about celtic music and galician culture, you should not miss Ortigueira’s Festival of Celtic World, an international renowned music festival which takes places in Ortigueira, a beautiful village in the province of A Coruña. Ortigueira’s Festival has been preserving for more than 30 years. Thousands of visitors come every year to listen to some of the best folk concerts in the world. There are different stages and a lot of performance in the streets. The festival is free. There is also a free camping area which is located in a pine forest in front of a black sand beach, called Morouzos.