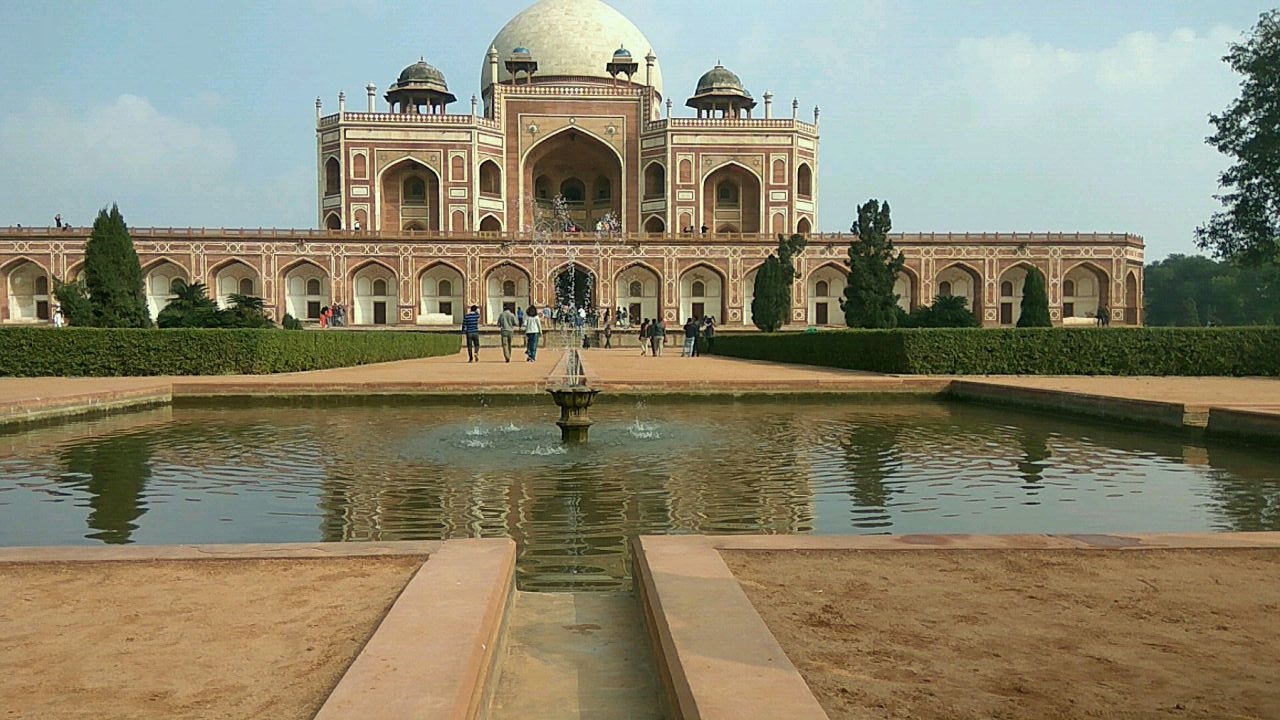 The Mughals were an extravagant bunch, who didn’t hold back when constructing opulent structures. The Humayun Tomb Complex is testament to this affinity for luxury.

A photo walk was planned to visit Humayun Tomb complex. A few of my friends accompanied me on it, and the basic aim was to understand the architecture of the structures within the Humayun Tomb Complex. The day of the walk soon arrived, and we made our way Nizamuddin East, New Delhi, where the monument is located. We first gathered outside the gate of the Complex.

On reaching the tomb, we were awestruck by its beauty.  The tomb serves as the resting place of the Mughal Emperor, and was built in 1565 AD. It is a structure that stands testimony to the glory and power of the Mughals.  Charbagh, which are square shaped gardens, line the perimeter of the Tomb. This distinctive Mughal architectural feature is interspersed with water channels. The facade of the two storied building is constructed from red sandstone.

There are several tombs dedicated to other Mughal rulers within the whole complex. Out of these, we first visited the Afsarwala Mosque and Tomb which was built using marble  in 1566 AD. The front facade of the structure features three broad arches, and it is hence referred to as the ‘Trimukhi Masjid”. It houses the tomb of a nobleman who worked under Emperor Akbar.

After surveying the Afsarwala Mosque, we entered  Bu Halima’s Garden and Tomb, located on the Western side of the premises. Bu Halima’s Tomb is made of sandstone set with intricate plasterwork that adds to the beauty of the structure. Bu Halima was one of the eminent noblewomen who played a major role in Babur’s dynasty of rule.

We then came across Isa Khan’s Tomb and Mosque which is made of red sandstone. It resembles the tombs of other rulers from the Sur dynasty quite closely, and is surrounded by octagonal gardens. The structure was built in 1547 AD and acts as the grave of Isa Khan Niyazi ( a Pashtun noble) and his family.

We then approached the Arab-Sarai or ‘Rest House for the Arabs’ which  was commissioned by Hamida Banu Begum sometime between 1560 AD and 1561 AD to provide a temporary home to the labourers and artisans working on constructing Humayun’s tomb. The gateway that leads to the Rest House is adorned with elaborate stonework.

In the end we visited the Nila Gumbad or ‘Blue coloured Dome’ ,a name derived from the blue tiles that decorate the dome of this structure, which was constructed by Abdul Rahim Khan-I-Khanan.

The exterior portion of Nila Gumbad is octagonal in shape, whereas the inner portion is square. The ceiling is ornate with incised plasterwork that has been painted and covered with glazed blue tiles.

All in all it was truly a walk to remember. We were able to understand the building techniques used to make these structures. We even shared our knowledge with some South Korean tourists.

The walk enabled us to look at how cultural contexts change the built heritage of a geographical area.  The Mughal era in India reflects this transformation of building styles, and thus is a good example of how cultural evolution affects built spaces.

Are cultural routes a solution for regional cooperation?

This is the oldest cave temple in Bengaluru