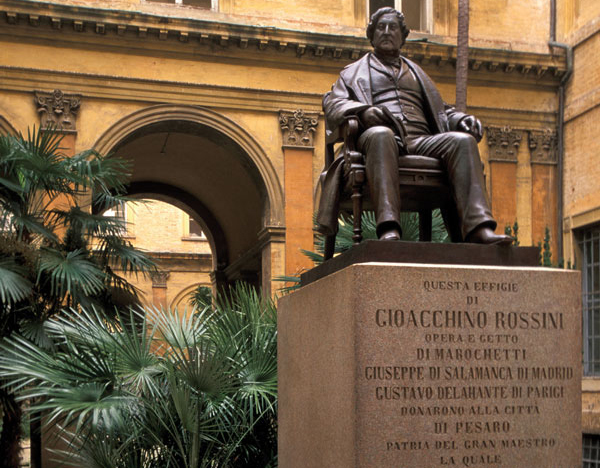 The Rossini Opera Festival, usually called “il ROF” (the ROF), is an italian Opera Festival held in August of each year in Pesaro, the birthplace of Gioachino Rossini. The worldwide known composer was born in 1792 in a house bought in 1892 by the city of Pesaro and declared national monument on february 25th, 1904.

It is now a museum showing materials coming from private collections, such as the one of the french collector Alphonse Hubert Martel, composed by lithographies, portraits of Rossini and many other art objects. Performances of the Opera Festival last two weeks and are given in the “Teatro Rossini”, a 850-seat theatre built in 1818, and, since 2006, in the modified “Adriatic Arena” sports arena of Pesaro which holds 1,500 spectators.

The Festival was established in 1980 with the aim of making the world more aware of Rossini’s neglected operas and has now become a very famous italian Opera Festival, with an incredibly high presence of people coming from foreign countries (only 1/3 are from Italy). The ROF has seen many of Rossini’s lesser-known works revived, some of which have since entered the standard operatic repertoire. Each edition is different to the previous one, because of the selection of Rossini’s works. For example “Il viaggio a Reims” (The journey to Reims) and “Stabat Mater” are played almost in every edition of the Festival, while “Guillame Tell”, one of the most famous works of Rossini, was played only a few times, in 1995 and 2013.

“Guillame Tell” is an opéra in four acts. The story is taken from Friedrich Schiller’s “Wilhelm Tell” (1804). The opera was Rossini’s last, although he lived for nearly forty more years. In 1828 he Rossini was 36 and was the most famous composer of the world (Beethoven died the previous year). From 1808 onwards he composed from 2 to 5 opéras per year and in 1828 stopped to do it. The decision was taken because of health problems, but mainly because Rossini was already very rich at the time, also thanks to good financial investments. The Fil Rouge of the complex plot of “Guillame Tell” is the process of freeing of the Swiss people from the Austrian domination. The most important character is Guillame Tell (also called William Tell –  Guglielmo Tell in italian) who leads the people to victory and freedom. The work is also famous because of the overture, which sums up the entire plot. The ouverture finale is worldwide known and with its explosive rhythm symbolizes the freedom of the Swiss people.