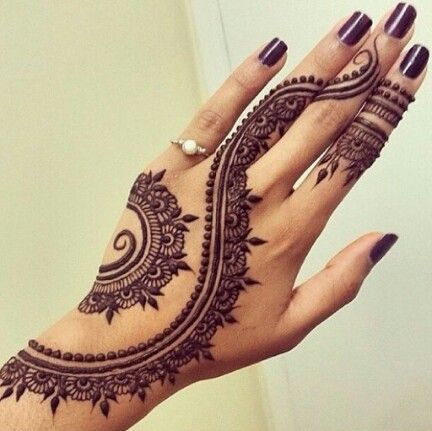 From presenting the fabulous skills at stage to being a street artist, India can be considered as a cultural hub for various art forms. One among such art forms is the art of Mehendi. Mehendi, though derived from the Sanskrit word Mehendhika, cannot be traced in origin. This art form has been existent since centuries and is practiced by people of different cultures, thus is not place specific. People travelling all over the world carried this talent with them thus spreading it over different continents.  Though, technically no specific point of origination can be associated with such an art yet Hindu Mythology has a very interesting story to tell in this regard. It has been said that once Goddess Parvati met a saint in the jungle she used to reside in. She was the most beautiful women existing then and thus loved to beautify herself even more. She had natural jewels and lovely clothes to magnify her body, yet one day she observed that she had nothing to make her hands and feet look even more attractive. She thus demanded the saint to give her something which could beautify her hands and feet and she can please Lord Shiva when he’ll be back home. Listening to this, that saint provided her with such a plant and told her to apply it on her hands and feet. So, mesmerized the Goddess was, that even today, mehendi is considered among the 1st entity of the ‘solah shringar’ for the married Hindu women. It is often said, ‘mehendi’ and ‘bindi’ forms the two entities among them, which alone are equivalent to the solah shringar of the women. So, if this is true, it may not be wrong to say that such an art existed eternally as the above story cannot be categorized under any time frame.

Whatever it’s origination may be, such talented artists can be found in India, that one may just keep looking at their piece of work after getting acquainted with it. This form of art is so important in some religions, that Hindu marriages, festivals and various rituals are supposed to be considered incomplete without the same. A special function in Hindu marriages under the name of ‘Mehendi ki raat’ is conducted where various artists can be seen showing their skills beautifying 100s of hands celebrating the joy of marriage. Apart from the traditional significance, it can also be seen as a style statement for the people who visit to enjoy the culture and heritage of our country. Once walking through the pathways of C.P., I got acquainted with a foreigner (male) who had Mehendi applied on his forearms, thus it can be observed that it has even crossed the barriers of gender discrimination (not to be taken seriously).

The art of Mehendi is not as easy as it seems. The ‘keeps’ or the ‘cones’ of mehendi which we see today were not available long back then. People at that time used to mix ‘heena’ powder with the sticky substance present in the ladyfinger and then apply it using their fingers.

All the information thus shared is something I acquired from one of the artist who practices such an amazing skill to gain her livelihood. This artists, travelling all the way from her home for 1-1.5 hours spends 8-10 hours a day in one of the street of C.P coloring the lives of people coming to her and spreading smiles.

Such an art becomes an icing on the cake for any place one may visit in North India, may it be markets, fair, marriage or cultural hubs. What remains a concern is, though such an art is quite widely practiced, yet the time isn’t far when the people will stop practicing it as it does not serve as a much promising profession. Even after putting their soul into such a profession, the income of the individual varies drastically from time to time.

The art of Mehendi is one among those arts which develops by time and adds on new flavors to itself. From being a traditional form of art, it is now ready to compete with the arts of modern world i.e. tattoo making. Various workshops and competitions thus should be organized in order to spread this art among the youngsters so that they can carry it forward. Though this art has gained wide popularity in North India, yet it still needs to get into light in the southern part. If such an art can spread from one continent to another as the history suggests, a little more efforts can spread it from north to the southern part of India too. After all, the Art of Mehendi is a significant contributor of the Intangible Cultural Heritage of India.