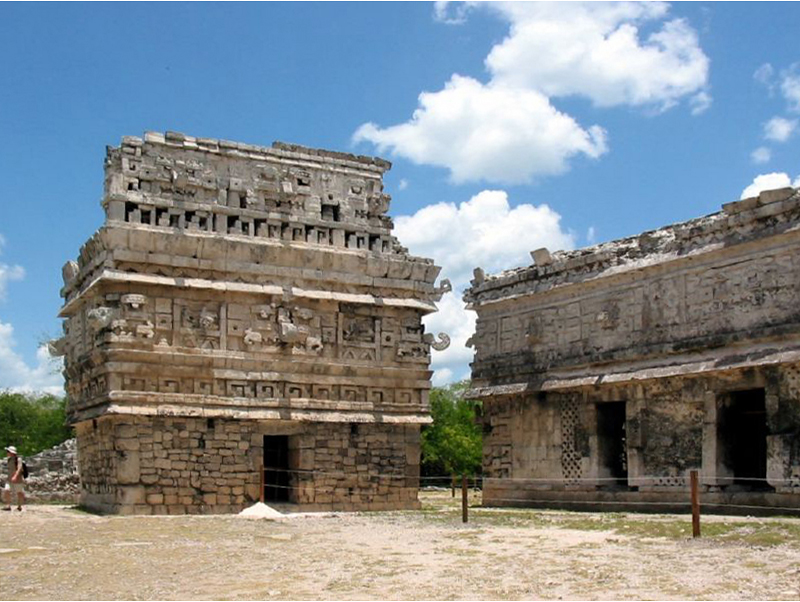 Chicken Itza is a much visited archaeological site located in Mexico’s Yucatan peninsula.It is rich in history and frequented by many tourists.The term Chichen Itza means “the mouth at the well of Itza”. Chichen Itza was designated as an UNESCO world heritage site in 1988. It is a massive step pyramid also called ‘El Castillo’ or the Temple of Kukulcan, it dominates the ancient city that was thrived from 600 AD to 1200 AD.

The complex his a pyramid rising up to a height of 72 meters, having 91 stairs facing a cardinal direction. There are 365 steps, the number of days in a solar year. There are times of the year when the shadows cast by the setting sun gives the appearance of a snake. There is a carving of a plumed snake at the top of the pyramid. The architecture of the Chechen Itza has Puuc and chenes styles from the northern Yucatan peninsula.

There is a very interesting section called Tzompantli or the skull platform. There was a legendary tradition at Chichen ,that very few people know about. The tradition was the “cult of Cenote” ,that involved a human sacrifice to the rain God. The region is very dry with no rivers or streams ,but it has sinkholes called Cenotes. Cenote Sagrado, was a place of pilgrimage for ancient Mayan people. The victims were thrown in the city ‘s major cenote which is at the northwest part of the ruin. The victims were thrown along with their jade, gold and other valuable ornaments. Discovery of skeletons and sacrificial object confirmed the sacrifices that took place in those days.