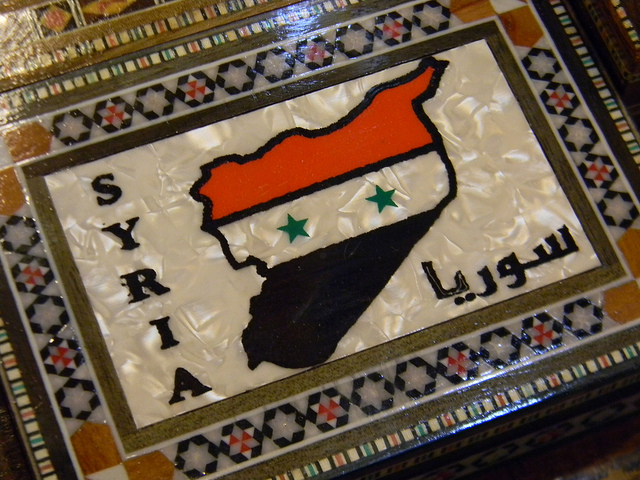 It has been over four years now, since the Syrian uprising took place; four long years of turmoil, violence, bloodshed and destruction. The prolonged conflict has caught Syria’s both physical and cultural heritage in between the crossfire, turning generations of old heritage into collateral damage.

According to UNESCO reports, 93 percent of the country’s total cultural sites are currently within areas of conflict and displacement. Furthermore, out of Syria’s 46 primary heritage sites, six have been categorized as World Heritage in Danger sites, with some structures already destroyed or seriously damaged by shelling or looting.

Ransacked and looted: Dismal picture of Museum of Aleppo

Plundered, looted, turned to shambles, the gross devastation suffered by Syrian heritage sites doesn’t only end at the hands of extremists, but continues also at the hand of illegal traders, illegal traffickers and smugglers who carry on illicit excavation, trafficking and trade of cultural properties.

Taking on the enormous responsibility of restoration with the aim to help counteract illicit trafficking by not only categorizing the types of objects most at risk, but by also providing a succinct guide for museums, auction houses, art dealers, and collectors on how to facilitate the identification of potentially stolen or looted items.

Anne Richard, Assistant Secretary of State for Population, Refugees, and Migration, during the launch of the International Council of Museums’ Emergency Red List of Syrian Cultural Objects at Risk, has stated that the situation, clearly, is critical, not only for the survival of the Syrian people, but the heritage they cherish. “Wherever one goes in Syria, one finds monuments from the past around every corner. Ancient religious edifices are still in use for daily observances. Historic homes provide shelter. Archaeological sites were—in better times—a place to visit, appreciate, and even have picnics. They are part of the fabric of Syrian life—a source of pride and self-definition for their present and future. Today, with the release of the Red list, we take an important step in helping Syrians preserve this unique and priceless cultural heritage. We are monitoring the situation there closely. And we are engaging internationally with national police, customs officials, ministries of culture, and other relevant entities in countries where Syrian cultural objects might transit and where these objects might find a market.”

What further complicates the restoration process is the ongoing conflict on the ground which further puts the heritage sites in danger and makes it hard to combat the illegal trading and looting of these sites. All said, a number of international, national, local communities and NGOs are working on ground, leading the restoration work.

Pioneering the restoration work is UNESCO’s Emergency of Safeguarding of the Syrian Cultural Heritage Project, which aims to curb the ongoing loss of the cultural heritage and prepare post-conflict priority actions in Syria. Working towards restoring social cohesion, stability and sustainable development through protection and safeguarding of cultural heritage in view of the on-going growing destruction, loss of Syria’s rich, and unique cultural heritage is the main aim of the project.

UNESCO is implementing a three-pronged approach:

Many other organizations are continuously working on ground towards the restoration process. Aleppo Archaeology, Archaeology in Syria (NETWORK), Association for the Protection of Syrian Archaeology (APSA), Directorate-General of Antiquities and Museums (DGAM), Division of Antiquities of the Free Council of Aleppo, Documenting the Injured Archaeological Sites of Homs, Eyes to protect Syrian Heritage (a.k.a. Eyes on Heritage and Etilaf (a.k.a National Coalition for Syrian Revolutionary and Opposition Forces), are few of the Syrian based organization who are working on ground, showing the support of local communities and people in preservation of the rich Syrian cultural heritage.

What is also unique about the restoration process is the use of technology to combat the further loss. From using 3-D cameras and laser scanning along with projects like the digitization of the leftover inventory and archives of cultural property in Syrian museums ( in order to simplify the identification and the registration of any missing artifacts) has proved to crucial in restitution of many artifacts and cultural properties.

Additionally, the International Council on Monuments and Sites (ICOMOS), in association with the International Center for the Study of the Preservation and Restoration of Cultural Property (ICCROM) has partnered with the DGAM, in coordination with UNESCO, to hold several e-learning courses for Syrian cultural heritage professionals.

Katharyn Hanson, a researcher and archeologist working on ground with international agencies on the restoration work, has highlighted an important and untouched aspect of the destruction of the heritage sites in Syria. Talking about the destruction of a 2,000-year-old temple in the Syrian city of Palmyra, in an interview with CNN.com, she stated that Palmyra in particular, is crossroads that was strategically important in the past, just as it is now; it is the crossroads of the east meets the west, it’s where the Romans set up camp. Lots of the sites getting damaged by ISIS today are sites that we could learn so much about the ancient past from.

And rightly so. Destroying heritage sometimes can be compared to changing the names of old cities and states in the name of relevance and modernization. Syria has been home to some of the richest treasures of the ancient world: the remains of immense Bronze and Iron Age cities; extensive Greek and Roman metropolises; well-preserved rural Byzantine towns; some of the world’s most spectacular medieval castles; and masterpieces of Islamic art and architecture. Thus, preserving ancient cultural artifacts is vital not to the future of Syria, but to the whole of humanity.

Al- Azm, ex-director conservation laboratories for the Syrian General Department of Antiquities and Museums, puts it very aptly “One day, the fighting will stop and Syrians will have to go back … to the business of putting their country back together again. Cultural heritage represents their common shared experience. It’s going to be absolutely critical to provide a bridge across this divide.”

With a little optimism, we must hope that the war along with all its atrocities and destruction will soon come to an end, and the future generations will have something still left for them to connect to the rich cultural heritage the great land of Syria is home to.