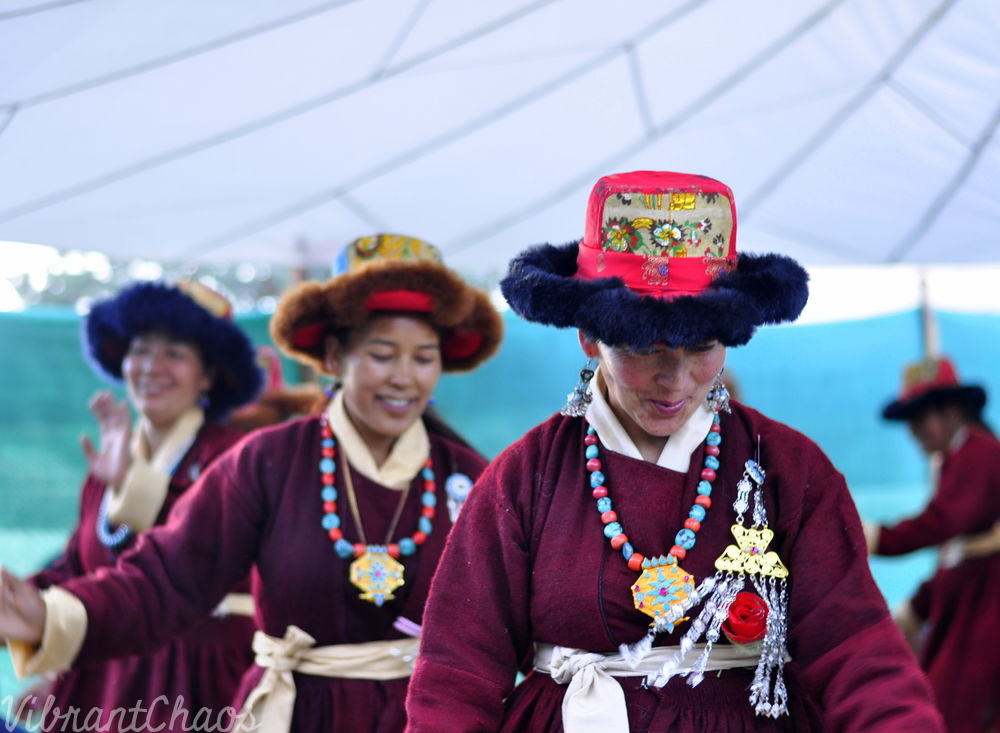 Ladakh’s festivals and dances: a commentary on its cultural heritage and why we need to talk about it.

Bhangra, Dandiya, Lavani are the obvious names when anyone mentions Indian folk dances. In fact, universities abroad are said to have established ‘dandiya raas’ clubs that compete at the inter-collegiate level! The same goes with Diwali, Holi, Ganeshotsav when it comes to Indian festivals. The vastness of the Indian subcontinent makes it the epitome of diversity in culture. But we conveniently forget some very important bits that contribute to Indian culture as a whole. Have you ever heard of the Hemis festival or the Jabro dance?

The Leh district is India’s favorite when it comes to flaunting pristine natural beauty. But what about it’s little known culture? Visualize yourself in the grand front courtyard of a monumental Buddhist monastery. The air is filled with festivity and the sound of horns, cymbals and other instruments. Prayer flags fluttering in the breeze and people turning prayer wheels set in a row. This is the setting of the Hemis festival in the Hemis gompa (monastery), which is around 45 kilometers from Leh. The festival, which lasts two days, marks the birthday of Guru Padmasambhava, the founder of Tibetan Buddhism. As in all cultures, various stories have come down since generations but the underlying theme is said to be that of ‘good over evil’. (Note the similarity with Diwali!)

The highlight of the festival is the performances. Dressed in bright and vibrant colors, the Ladakhi people indulge in dancing and entertaining. The ‘cham’ dance involves monks dressing up in the traditional attire and wearing magnificent masks. Through each dance they try to portray a different story. (Here note the similarity between the Ladakhi masks and dance to the South Indian form of Kathakkali!)

The festival takes up a higher level of grandeur every 12 years, the last time being in 2004 and the next being the coming year, 2016. The highlight is the display of the ‘Thangka’, the sacred cloth painting of the Guru.

Namgyal Institute For Research On Ladakhi Art and Culture (NIRLAC) is an organization that is going great lengths to conserve Ladakhi art and culture. One of their projects included documentation of the Thangka paintings, their restoration and recommendation on storage. NIRLAC has also received the UNESCO Asia Pacific Award for Heritage Conservation.
Leh’s rich culture is not restricted to just festivals. In the hills of Ladakh are groups of women who perform the Jabro dance to welcome the New Year. In one such small village in the Nubra valley is a group of women that possess an expertise in the Jabro folk dance. Consisting of singing and dancing together, Jabro is a gentle form with small, elegant movements. Guess the most interesting part? The costume and story depicted changes with every song!

Here’s a series of pictures depicting a variety of different outfits.
One similarity between all three outfits is the long, thick robe they wear which protects them from the extreme cold.

India truly is a melting pot of cultures. However, it’s high time the lesser-known cultures come under the spotlight. The Hemis festival and the Jabro dance are just two of numerous of Ladakh’s festivals and dances. Their beauty and uniqueness definitely makes them worthy of worldwide acclaim and importance.