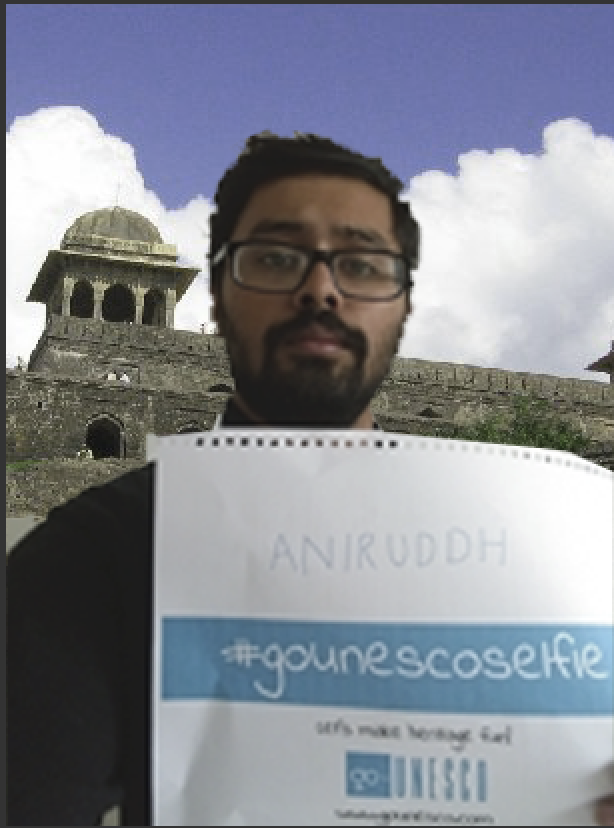 The province of Malwa, in modern Madhya Pradesh, had as its capital the ancient Hindu city of Dhar, about 24 miles north of Mandu, till it was conquered by the Delhi Sultanate – by Ala-ud-din Khilji in 1305 A.D. – and a governor installed in place.

As with all conquests, among the first state buildings to come up were mosques, built with pillars taken from Hindu temples, very similar to the Qu’wwat-ul-Islam mosque at the Qutub, Delhi.   The decline of the ruling power at Delhi after the sack of the city by Timur prompted the Ghauri governor of Mandu to declare his independence in A.D. 1401, with Sultan Dilawar Khan declaring himself Shah.  It was left to his son, Hoshang Shah, to shift the capital from Dhar to the plateau of Mandu. Bounded on three sides by a rift valley, and overlooking the Narmada to the south from a height of 300 metres, the fortress of Mandu was virtually impregnable.

The fortress enclosed an area of approximately 12 square miles within walls over 25 miles in circumference. The inspirational landscape of Mandu, jutting out from the Vindhyas range, became the site of some of the finest provincial Islamic architecture, with mosques, madrassas and pleasure-palaces dotting the landscape.

The Jami-Masjid near the centre of the Mandu plateau was one of the finest achievements of the Ghauri dynasty. A mosque, with its necessarily vast scale to accommodate numerous worshipers, is monumental by its nature, and to endow it with elements of humanism can be counted as a very difficult exercise in design. This problem has been fairly successfully addressed.

Of the elements that make up this mosque, the monumental entrance from the east is a fine exercise in elegance, with a main arched doorway flanked by two smaller openings. A squat yet well-proportioned dome crowns this entrance, with its profile being reflected in smaller domes over the cloisters surrounding the central court, their proportions being ‘not unlike in profile to the so-called shoulder shaped contours of the shikharas of Orissan temples.  The courtyard is surrounded on three sides by columned cloisters with galleries of majestic arches.

The whole building is faced with red sandstone, with little concession to decoration. Indeed, the only departure from sobriety is in the chattri inside the mosque, next to the mihrab, which shows influences from florid Gujarati architecture.

Hoshang Shah’s Tomb
To the south-west of the Jami-masjid lies Hoshang Shah’s tomb, among the earliest Muslim buildings in India to be sheathed entirely in white marble, possibly exerting an influence on buildings to follow elsewhere, and documented fact says that Shah Jahan sent a team of surveyors here for case studies before commencing construction of the Taj Mahal.

Asharfi Mahal
Although little remains of the Asharfi Mahal, to the east of the Jami-masjid, it was an extraordinary achievement in its time, serving as a madrassa with open courts surrounded by cells for students on several levels. Here also are the remains of a seven-storey victory tower – which collapsed in the 17th century – echoing Ala-ud-din’s megalomaniac flights of fancy near the Qutb.

Hindola Mahal
From the remains of Hoshang Shah’s palace, it is clear that the whole area was divided into three zones – ceremonials with halls of audience, the king’s private chambers and the ubiquitous zenana, or women’s chambers.  The ceremonial zone was dominated by the Hindola Mahal – literally ‘swinging palace’.

This vast longitudinal room enormous arches punctuating its length – and is uncharacteristically massive, with strongly battered walls adding to its ponderousness.  One theory is that it was originally intended to have several more storeys above.

Pleasure at Mandu
Situated as it was on a plateau, with numerous water bodies through its length, and the home of a prosperous dynasty, Mandu became the site for various pleasure-palaces and resorts for royalty, be they for the women of the harem, the fine arts or hunting. In Mandu we have architecture dedicated to the pursuit of pleasure on a large scale, in the form of the Jahaz, Lal, Chappan, Baz Bahadur and Rupmati palaces.

The Jahaz Mahal, built by Mahmud Khilji, was a departure from the previously stolid and somber style at Mandu. The most striking thing about this monument is its location between two water bodies, the Kaphur Talao and the Munja Talao, which gives the building the appearance of floating on water, hence its name, literally the ‘ship palace’.

Architecturally, the building consists of a series of compartments and corridors over the Munja Talao, with terraces, kiosks and numerous open-air baths conforming to the lifestyle at Mandu, which was slowly sliding into decadence.

The Jahaz Mahal proved an inspiration for later Khilji sultans to dot the landscape with their own pleasure pavilions and summer retreats. The esoteric character of Mandu later prompted the like-minded Mughal emperor Jahangir to spend a considerable amount on its maintenance.

And so, even though the city of Mandu was eventually absorbed into the Mughal empire, its legend lives on as the city of Joy, and in the forests of the Vindhyas today, if you listen hard enough, echo the strains of the romantic tales of Rupmati and Baz Bahadur to this day.