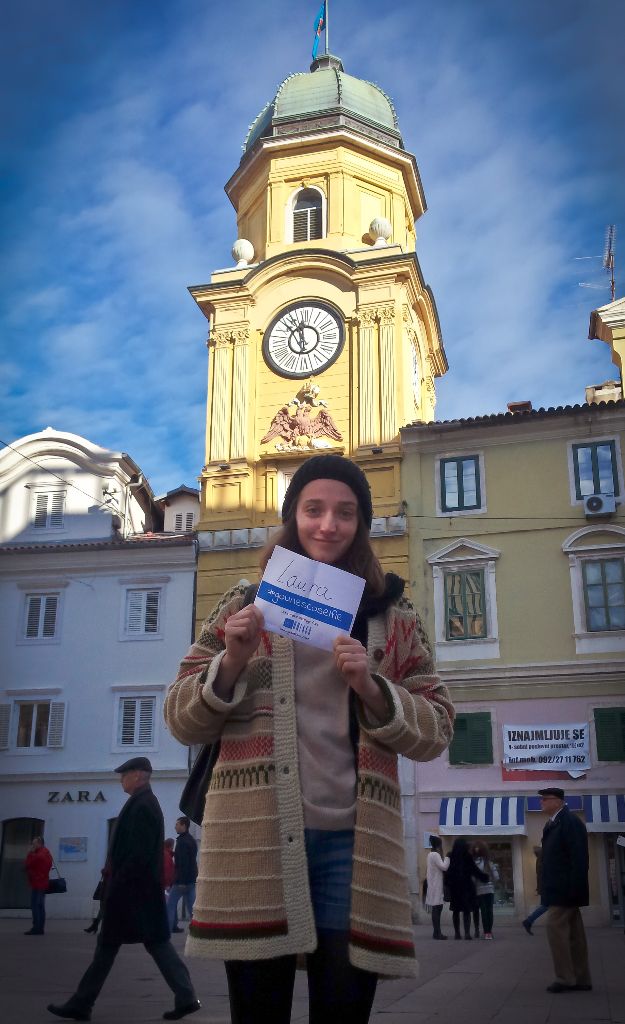 It was a warm sunny day in my hometown Rijeka in Croatia. My father and I went to the fish market to get the ingredients we needed for a delicious meal from the local fishermen.  After wandering through the crowded streets filled with fresh produce from local vendors, we decided to stop for a morning coffee. We walked away from the market and onto the main street of the town, Korzo. As we walked past numerous shops and cafés where dozens of people were enjoying their energy boost in the sun, I could also see one of the most famous symbols of our town – the Clock Tower. A meeting point for generations, the bright yellow tower is a reminder of past times when the town was encircled by walls.  It served as one of the two entrances to the fortified town. In the 17th century, a clock was added to the tower and thus it got this name and became the meeting point which its inhabitants referred to as “under the clock”.

As time passed, the tower was elevated and decorated with various inscriptions, decorations and the busts of the feudal lords of Rijeka, the Habsburg rulers. We also find the historic coat of arms of the two-headed eagle. Leopold I. granted Rijeka the right to use the symbol of the double-headed eagle as its coat of arms. Both heads of the eagle are facing in the same direction as they stand on a jug out of which a stream of water is flowing.

In 1784, clocks that were purchased in Ljubljana were put on all four sides of the tower and they were operational until 1873, when they were replaced by clockwork that was exhibited in Vienna. The clock is still running today. In 1890, architect Filbert Bazarig covered the tower with a dome. The tower was renovated in 1983 and has become a visual symbol of Rijeka.

For me, the Clock Tower is always a nice sight, particularly in the colder, rainy and gray months, when the yellow fascade of the Tower smiles down on the people of Rijeka, reminding us of the Sun and warmer days we all long for.

The Ruins of Jamali Kamali