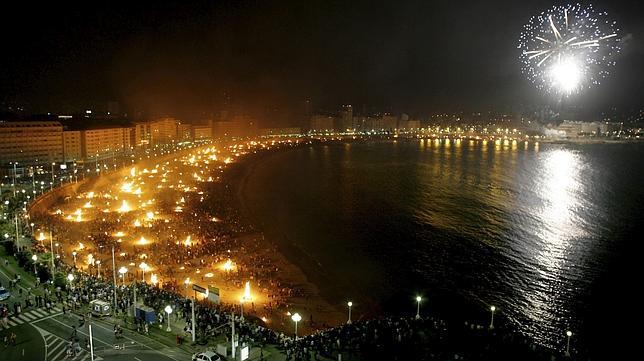 Galician´s culture is very different from mainstream Spanish culture. Celtic roots, an own language -Galician-, its music and a deeply rooted tradition based on legends and mythology are some of its cultural identities.

Galicia has always been called the land of witches (in Galician Terra de Meigas), magic and superstitions; presumably due to its mystical past, its harsh landscape and a special geographical location. When the Romans conquered Gallaecia, they called the area Finisterre Cape- finis terrae- , because they believed they were at the end of the world. They were also amazed at how the ocean seemed to devour the sun at this place.

A noite de San Xoán (St. John’s Eve) is one of the most popular and more expected festivities every year. It represents original Galician culture. Although The Bonfires of Saint John is not only typical from Galicia (in many other communities in Spain is also celebrated) it has many peculiarities.

In Galicia, St.John´s Eve is closely connected to rituals of purification. On the night; the shortest night of the year, it is believed that our world and the other side connect. St. John’s Eve is a Christian festivity with pagan origin. It takes place the night of 23rd to 24th of June and celebrates summer solstice arrival. People make bonfires and fireworks on the beach with their family and friends. It is a magical night and the party lasts until dawn.

The meaning of fire is to leave behind bad times. Students, for example, used to burn the notes of their school year, writing their wishes on paper and burn them. Thus, wishes will be fulfilled during the summer. People jump over a bonfire seven times on San Juan’s night, they will be cleaned and purified, their problems burned away. Jumping in the sea at midnight is supposed to be a way to wash away evil spirits.

In the afternoon, the smell of roasting sardines and skirt steak fills the whole city.

According to tradition, the previous day of Saint John Eve must be taken seven herbs, in Galician called Herbas de San Xoán which have therapeutic properties. People placed them in water and leave for one day. People believe these herbs possessed magical properties and they wash their faces with this water the following day of Saint John Eve.

Another ritual must be done “A Noite de San Xoán” is a queimada. It is a puch made with orujo, a transparent liquor acquired by distilling the pomace of the grape and flavoured with special herbs or coffee, sugar, lemon peel, coffee beans and cinnamon. The liquid is set alight to make it burn, while it is stirred with a large spoon and is being recited a Galician incantation to cast out demons and bad spirits.

St. John´s Eve is all about changes and contrast. It is about night and day, past and future, fire and water.