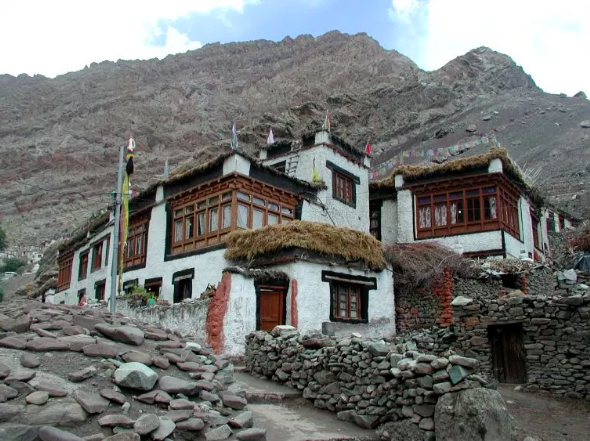 Vernacular architecture is influenced by a great range of different aspects of human behavior and environment, leading to differing building forms for almost every different context and country in the world; even neighboring villages may have subtly different approaches to the construction and use of their dwellings, even if they at first appear the same. Despite these variations, every building is subject to the same laws of physics, and hence will demonstrate significant similarities in structural forms.

When one discusses vernacular architecture, one must not forget the influences, which led to the construction of this style of architecture; some of the few influences that pop up in our mind are:

One of the most significant influences on vernacular architecture is the macro climate of the area in which the building is constructed. Buildings in cold climates invariably have high thermal mass or significant amounts of insulation. They are usually sealed in order to prevent heat loss, and openings such as windows tend to be small or non-existent. Buildings in warm climates, by contrast, tend to be constructed of lighter materials and to allow significant cross-ventilation through openings in the fabric of the building.

Buildings for a continental climate must be able to cope with significant variations in temperature, and may even be altered by their occupants according to the seasons.

Climatic influences on vernacular architecture are substantial and can be extremely complex. Mediterranean vernacular, and that of much of the Middle East, often includes a courtyard with a fountain or pond; air cooled by water mist and evaporation is drawn through the building by the natural ventilation set up by the building form. Similarly, Northern African vernacular often has very high thermal mass and small windows to keep the occupants cool, and in many cases also includes chimneys, not for fires but to draw air through the internal spaces. Such specializations are not designed, but learn by trial and error over generations of building construction, often existing long before the scientific theories which explain why they work.

Belarus in a landlocked country in the Eastern Europe bordered by Russia in the Northeast, Ukraine to the South, Poland to the West and Lithuania and Latvia in the Northwest.

As unique this city is from its European counterparts, its traditional/vernacular architecture is unique as well. The architecture of Belarus represents perspective of the local people, living in the different part of Belarus. The structures here reflect their local traditions, of those who used to live here for centuries. People behind these marvellous architecture in Belarus, were traditional constructional workers, who were working in the villages, towns, cities and castles. The architectural style was mainly influenced by harsh cold climates and rural population that existed at that time, which directly impacted in the development of different architectural styles, between the regions and other parts of Eastern Europe.

In regard with the vernacular architectural style adopted by Belarus, it can be broadly divided in two the Log Cabins and the Terrestrial construction, where an upper part was built from wooden logs, which were commonly used till the beginning of 20th century. The houses’ walls were often covered by clay. This technique is still currently used by some craftsmen in Eastern Europe.

Historically log cabin construction has its roots in Scandinavia and Eastern Europe. Although their origin is uncertain, the first log structures were probably being built in Northern Europe by the Bronze Age.

By stacking tree trunks one on top of another and overlapping the logs at the corners, people made the “log cabin”. They developed interlocking corners by notching the logs at the ends, resulting in strong structures that were easier to make weather-tight by inserting moss or other soft material into the joints. As the original coniferous extended over the coldest parts of the world, there was a prime need to keep these cabins warm. The insulating properties of the solid wood were a great advantage over a timber frame construction covered with animal skins, felt, boards or shingles. Over the decades, increasingly complex joints were developed to ensure more weather tight joints between the logs, but the profiles were still largely based on the round log. One can see the lack of any kind of ventilation even in the form of small windows. Nevertheless, a medieval log cabin was considered movable property (a chattel house), as evidenced by the relocation of Espaby village in 1557: the buildings were simply disassembled, transported to a new location and reassembled. It was also common to replace individual logs damaged by dry rot as necessary. This easiness and uniqueness of log cabins helped the nomadic as well as the semi nomadic to move about to different in harsh cold climates.

Terrestrial Construction consists of a proper plinth / foundation with clay and stones and the walls of the house is made of clay here in Belarus, followed by a second floor which is made completely of Timber. It serves as a light weight addition to the structure. Even though the upper structure is light weighted, the structure is strong enough for families to live in. As this country is in the transitional zone between continental climates and maritime climates, with three dominant rivers, this type of architecture helps in sustenance much easier.

These are the major types seen in Belarus, and when this study was conducted I was able to draw out similar vernacular architectural styles that were prevalent in India since the sands of time.

When the architectural style of one region is to be studied in comparison with the architectural style of another region, the “elements of influence” are the ones that are taken into consideration. This article focuses on the Climatic influence in building a vernacular building. Hence while I tried to draw a comparison between Belarus (Europe) and places in India, I had to consider the states that are similar in climatic conditions in both these places. Hence I studied the Northern most states, Ladakh and Kashmir which have similar long harsh winters and short summers. This proved helpful, as I could find vernacular architectures that are similar to the one found in Belarus.

Although India is a country with several climatic conditions and extravagant architectural styles, the remains of wood buildings in India from the ancient and medieval period are very few, since wood is easily rots away and burns. Therefore, existing wooden buildings are generally from early-modern times. If older is considered worthier in historical value, wooden architecture would be inferior to stone architecture in India on the whole.

The lands that have kept consistent wooden culture in such circumstances are, in short, those blessed with ample rain, and therefore with abundant timber resources. They exist in the Himalayan region in the north and in the state of Kerala in the extreme south.

The Ladakh region is located near the Chinese border and has long been closed to the outside owing to the Sino-Indian dispute. Although I wrote above that the wooden cultural areas are in general blessed with ample rain and trees, Ladakh is a region that has little rain and is short of timber. The need to keep warm led them to import wood from Kashmir.

Jammu and Kashmir is a state in northern India, often denoted by the acronym J&K. It is located mostly in the Himalayan Mountains, and shares borders with the states of Himachal Pradesh and Punjab to the south. The Kashmir region was influenced by the civilization of Hellenism that had been brought by Alexander (the Great) to Gandhara in the 4th century B.C.E. This current also reached Ladakh.

The folk houses in Ladakh  have walls for the first floor, that are piled up with stones and sun-dried bricks, and then the wooden beams are placed and the floor joists across the walls to support the second floor walls above them, and repeatedly adds more wooden beams across them. Floors and roofs are made of mud threaded on wooden boards. Here even though the second floor of the houses is not completely made of wood the idea of structure is similar to that of the ones we find in Belarus. The wood is used here also serves the same purpose, to keep the people warm. In Ladakh roofs are basically flat, being unnecessary to waterproof, since it scarcely ever rains. Here though there is a lack of complete wooden structure similar to log cabins among the rural house.

The vernacular houses in Kashmir are made of wood and mud/sand. This helped them to retain heat and save them from destruction in case of earthquakes. This is similar with the terrestrial constructions seen in Belarus, which helps them from cold and floods. Also, you could observe that roof height is pretty low, so much so that if you raised your hands you could touch the ceiling. Many of the times you could see symmetrical houses i.e. if you ran a knife in between, you get two same looking houses. This was due to brothers and extended family living together. The houses used to have thatched roofs to avoid the snow from getting stuck. Every house mostly used to have a hanging room in the air called “Kaieni” normally at the topmost floor. This was kept as a play room for children. This aspect of architecture is unique to Kashmiri houses. This is room is created for kids to mainly play during the heavy snowfall and harsh winters that Kashmir is known for. Another interesting thing is the height of the staircase. It is very high in most of the houses because of the concept of clustering and space. This concept of clustered and narrowed high staircases is for the need of preserving heat within the houses. This same practice is seen among the vernacular houses in Belarus as well.

Hence one can say vernacular architecture is the simplest form of addressing human needs. The humanistic desire to be culturally connected to ones surroundings is reflected in a harmonious architecture, a typology which can be identified with a specific region. This greatly helps us in understanding the human life of the past, a subaltern approach that is mostly neglected. This architectural style not only helps us with the past but also helps us to achieve an environment friendly future.

Encyclopedia of Vernacular Architecture of the World. Volume 1.

The Towers that Watched Over the Ancient Fisherman Village in Sardinia