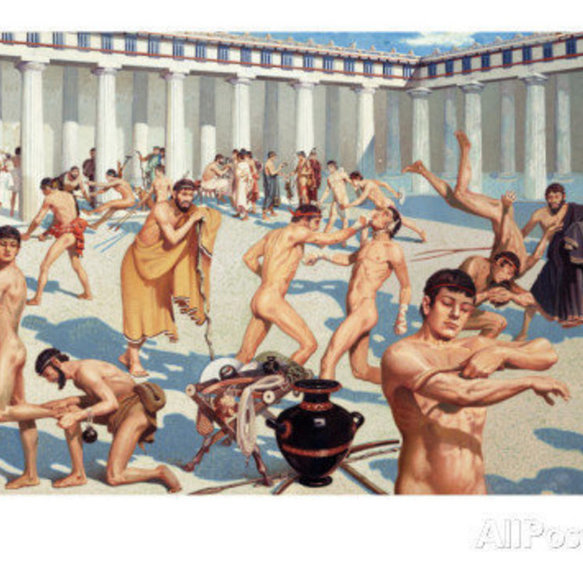 It is late evening, when Willy Zielke’s camera pans over the ancient landscapes of Greece, of what looks like the historic city of Olympia in shades of black and grey. We see the temple of Olympian Zeus,  each of its pillars trying to uphold whatever is left of it, and then the camera slowly tracks into Diskobolos, suddenly brings in a sense of athletic energy as this discus thrower in action, is ready to release his throw but then our attention is drawn towards the Teutonic decathlete.  The dramatic Wagnerian music composed by Herbert Windt only adds to the emotions and engages us completely into the sequence. Film fanatics and sports enthusiasts would recognize the film and its subject, and so would German propaganda makers. But the point is, the ancient Greeks, dedicated the Olympics to their gods, the Germans went on to make a film on it, and today we sit on the edge of our sofas to watch it on the television. What is it that has made the Olympics so special and why is it that we still love this legacy created thousands of years ago?

It was the ancient plains of Olympia, a Greek city that first witnessed the Olympic Games, way back in 776 BC. Why Olympia?  It is a place in the Western part of Peloponnese which is regarded as the Island of Pelops who claims to be the founder of the Olympic Games – a vast stretch of even land set at the backdrop of snow-capped mountains complete with mighty temples, intricate shrines, buildings that made Olympia the best option for sporting activities. The Olympic Games were not strictly religious in nature even though they were dedicated to Lord Zeus. In fact the main purpose of the Olympics was to bring out supreme physical abilities of Greek men, and see young people perform and accomplish the most challenging of sports. The higher motive was to create a sense of harmony among the various Greek cities.

The First Olympics of 776 BC- Rules, Regulations and Victors

It’s not the first ever event of its kind. Sporting events had been played earlier too in Greece. Coroebus, a Greek Cook and baker from Elis in Southern Greece is getting ready to run the one stade race, the only event in the first Olympics. He would have to sprint, for six feet of Zeus Heirophants (Approximately 192 meters). There are about 40,000 spectators, seated on the grassy slopes around the arena with excitement that they have been harboring in their minds ever since the messenger announced holy cease fire. The announcement had stopped wars and brought most of Elis and Pisa to Olympia, to witness the Olympics.  He gets ready to run with his 4 other competitors and goes to the starting point, marked by a stone. He stretches his hand forward and as soon, as he hears the blow of the trumpet, he sprints with all his might on the shifting sand below his feet. The cheers of the crowd are drowned by his pounding heart. Soon he realizes that he has won the first ever Olympics. The Victor, Coroebus of Elis is honored with an olive branch, but the fame and the pride conferred with it, is much greater than the prize. He is the first ever Olympics champion. His name would be engraved in the marble columns installed along the banks of the river Alpheus. He would be immortal in time.

The Olympic Games continued every 4 years hence, and the Greeks came to record their history through Olympiads.  The athletes from Elis continued Corobeus’s legacy without breaking the chain of victory begun by him. The one stade race was the only single event in the Olympics for almost 13 Olympiads where the athletes competed in groups of four decided by drawing lots. Each Olympics was preceded by a gala celebration comprising of parades marching towards the golden statue of Zeus. These celebrations as well as the complete Olympic event was looked after by the hellanodikes, who judged, planned and organized the Olympics and also supervised the training of the athletes.

The Olympics slowly found its place in people’s heart and grew in scale. By 708 BC, two more events, the Pentathlon and Wrestling were introduced. By 688 BC, Boxing too came in the picture, and by 648 BC it combined with wrestling to give rise to the ferocious sport of Pancration. The rules and the structure of events too became more challenging and complicated at every Olympiad; for instance, in the Pentathlon, only those who jumped a specific distance qualified for the spear throw, out of which the four best made it to the discus throw and those who qualified went on for further events. The two best fought it out for the title of the champion in the wrestling match.

It was the prestige of the title of a Champion that mattered more than the olive branch which was given to the victor and the red ribbon that was tied on their head for the first 60 Olympics. However, a new incentive was given to serious competitors from the 61st Olympics-The statues of the victors would be erected in their honor- but only if they prove their worth by winning three times.

It was explicitly mentioned that no slaves, criminals or barbarians could participate in the Olympics. While the unmarried girls had their own athletic contests in the Olympics, the married women were not even allowed to witness them and were barred from it on the penalty of death.  Only native Greek men were initially allowed to participate, however when the Greeks were defeated and invaded by the Romans in the second century, the Romans too started participating in them and let the games continue.

The Ancient Olympics created interesting history altogether. When in 393 AD, Emperor Theodor forbade the games after political upheavals, the Ancient Olympics already had to its credit, millions of jaw dropping, nerve wrecking and exhilarating moments till until 393 AD. Be it, the pushing off of a woman from the cliff for she had dared to watch the Olympics to a famous athlete refusing to participate in Pankration because he was ‘tired’ and even the old men who told the stories about the beginnings of Olympics to the youth while on their way to Olympia. The ancient Olympics lived for 1200 years before they were forbidden. But they were brought to life yet again in 1896 AD in a completely new form, but the same spirit. The Modern Olympics were here to completely transform the sports world.

Read about the Modern Olympics in our upcoming articles.

Wrestling – The Oldest Combat Sport in the World