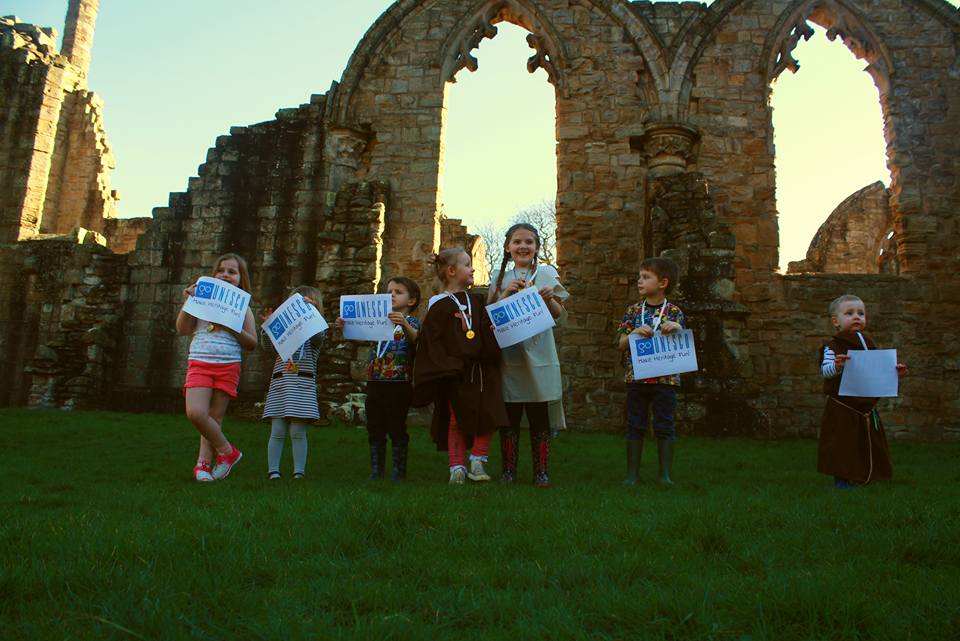 Our #makeheritagefun event was based at Finchale Priory in Durham, United Kingdom, an often overlooked heritage gem. This 13th century priory was home to eight monks and a holiday retreat based at Durham Cathedral. This site as a religions setting was originally established by St Godric in the 12th Century.

Godric, leaving the adventures of his youth behind, retired as a sailor and vehemently pursued his religious calling. Many believe he was a pirate during his years as a sailor; he was part-owner of many ships and This calling led him to settle at Finchale; a wild and overrun hunting ground owned by Bishop Flambard.

The earliest surviving stonework dates back to the 1196. Partial wall paintings can be seen on the piers of the church nave, although they are very faded. The nave arches show well-preserved tracery. A double ‘piscina’ is set in the south wall of the church and two seats of a ‘sedilia’ have survived. Fragments of monastic stonework can be seen in the farm buildings; including ‘trefoil’ windows and carved ‘pier capitals’. The farmhouse originally was linked to the old priory mill and the course of mill stream can be seen. There was a priory room known as the ‘player chamber’ which was supposed to be used for ‘dramatic representations’ such as mysteries or miracle plays as well as listening to the minstrels and gleemen who visited the house.

Finchale Priory, as it stands today, is a ruin. Brought about by Henry VIII’s dissolution of the monasteries in England between 1536 and 1541. Our #makeheritagefun event brought the Finchale priory alive! Our mini-explorers dressed up as monks and followed a scavenger hunt throughout the site

We explored some of the darker areas with torches!

Halfway through the scavenger hunt, we stopped to play a fishing game with magnets.

We learned how the monks lived at Finchale and fished for food in the river that runs alongside the Priory. Finchale Priory was a holiday retreat for the monks of Durham Cathedral so we played beach ball games.

The children received a special medal for completing the scavenger hunt…

Savour ‘Cun-tucky Chicken’ in the bylanes of Aurangabad

Ugadi: The festival of hopes