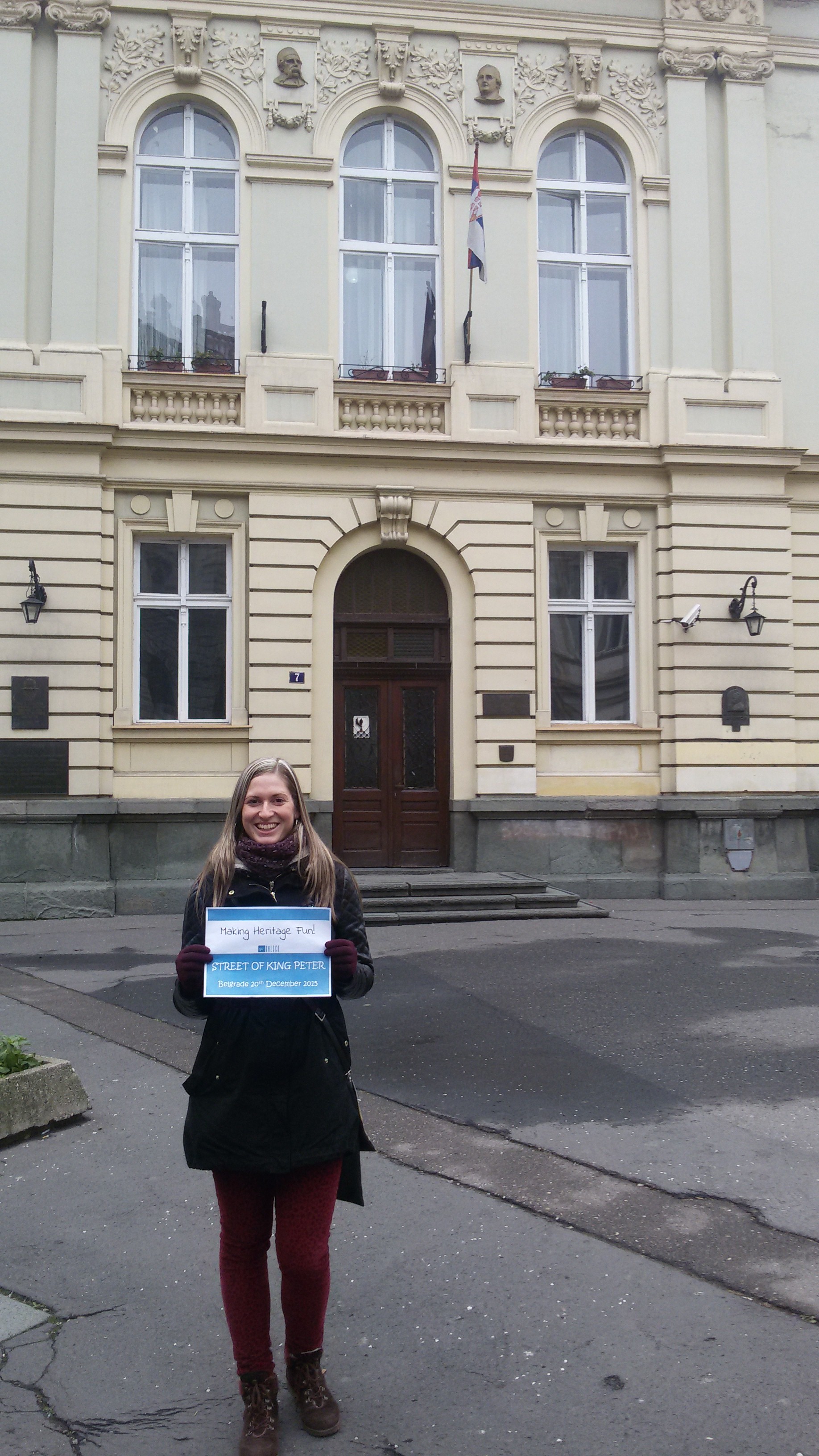 Make Heritage Fun was certainly new and exciting experience for me. When I first found out about it I immediately looked up the heritage sites in my country because there was no event organized in my town; so, I decided to prepare myself for a trip to Gamzigrad, Zajecar, one of the Unesco Heritage sites closest to Belgrade. However, two days before the event was about to take place, I saw that the meeting point had been changed and that there would be something organized in the Street of King Peter. I contacted Gordana who signed up to be a coordinator and that’s how the three of us met on a Sunday morning.

I love Sundays in Belgrade, especially mornings, when streets are so peaceful and not that many people can be seen in the streets. I felt as if we had the entire street just for us, to explore it and admire its most beautiful and significant buildings. At first we were a bit shy, getting to know each other and looking for passers-by who might be interested in taking part in our little “project”. Soon enough we spotted two men who were taking pictures and for a second we thought they happened to be there for the same reason as the three of us, but it turned out that they were just tourists visiting out lovely town. We were more than happy to explain them what Make Heritage Fun was all about and they gladly accepted to take a picture with us in front of the Saborna Church. I can say that we broke the ice and with much more confidence headed towards the Bistro “?”(Question mark), one of the oldest taverns in Belgrade. The waiters, after explaining them what our mission for that day was, invited us inside where we got a chance to talk with their guests who were enjoying themselves while drinking rakija, Serbian traditional drink. This tavern is a very interesting place to visit because Kafana “?” (Question mark) is the oldest bistro/tavern in Belgrade built in 1823. Prince MIloš gave the house to a doctor, Ećim Toma, as a gift for his merits in the Second Serbian Uprising. For many years it was called Ećim Toma’s Tavern but then it changed its name to “At the Shepard’s”. However, “By the Cathedral Church” was the name which was strongly opposed. Since church intended to sue the owner, to prevent that he decided to place a question mark as a temporary solution, but that name remained until today. Low chairs and tables resemble the Turkish style. It’s interesting that sitting on tripods has been abandoned because of the danger of falling when under influence of alcohol, and a fourth leg has been added, at the expense of aesthetics. Also it was a place where many diplomats, poets and writers gathered to discuss about politics and other topics of great importance for that time.

Another place which I really liked is the Elementary School King Peter I, the oldest school in Belgrade. There are two interesting facts about this school. First one is that it was built on the idea of Jelisaveta Načić, first female architect in Serbia. At that time it was such a significant moment for all the women who were trying to be as recognized as men in various fields, not just architecture. Another thing is that there was played the very first basketball game in 1923. The great basketball history of my country and many players has roots right here, in this school. Standing in front of it it’s just impossible not to think about all those stories that have taken place here, behind those walls, because walls are built in one style or another, but it is the stories and anecdotes that bring them to life and keep them vivid in our memory.

Walking down the street you’ll see the National Bank of Serbia, proudly “standing” in the corner. It wasn’t until year 2009 that I first had a chance to visit it. It was during the Museum Night that I discovered its treasures, old coins and currencies used in Serbia. I remember that I was greeted by a student who volunteered at the bank and as a history major, he shared his knowledge and passion for everything we could lay our eyes on. I’ll share history data about the bank, which can be found on its website ( http://www.nbs.rs/internet/english/index.html)> Following the liberation from the centuries-long period of the Ottoman domination in the Balkans in the nineteenth century, the re-established Serbian state embarked on setting up the cornerstones of the new cultural and state institutions. Throughout this period of re-establishing national authorities, Serbia had no national legal tender and as many as 43 foreign currencies were in circulation. What became actually apparent at this point was a need to put Serbia’s monetary and treasury affairs in order and establish a national bank. The year 1854 saw the publication of an article entitled ‘Current Monetary Crisis’ in the ‘Srpske novine’ newspaper in which the author called for establishment of such an institution. Nevertheless, thirty years passed until this initiative was realized. It was only in 1884 that the institution entitled the Privileged National Bank of the Kingdom of Serbia was founded. This bank was organized on the model of the Belgian national bank, which was, at the time, viewed as a paragon of a modern banking institution.

In only one street there was so much history, places to remember and recognize its value and importance. If those walls could only talk, what would they’ve told us. Merchant Stamenkovic’s House is an examle of Belgrade`s Art Nouveau style in architecture from 1907. For example, this building is breathtaking, but not everyone will spot it immediately. Everyone will first see the cafe which is a really cozy place to have your coffee at, but only if you raise your head will you be able to see some beautiful green tiles and details which characterize secession in art. By the time we got to the end of the street we had a company of a police officer who was looking at us suspiciously while we were taking pictures in front of the Jewish community and museum and Bajrakli Mosque. He finally approached us which demanded some explanation from our side, but at least we got some attention and we made sure that this police officer remembers what Make Heritage Fun is. 🙂

This day was most certainly fun and I wish that next time we can have more people participating, maybe someone who remembers these heritage sites from another perspective and has his/her own stories to share. There are many more sites that we’ve seen in King Peter’s Street, but I guess the ones I’ve mentioned had the most influence on me. Definitely looking forward to our next GoUnesco event.

Strangers united by a common cause