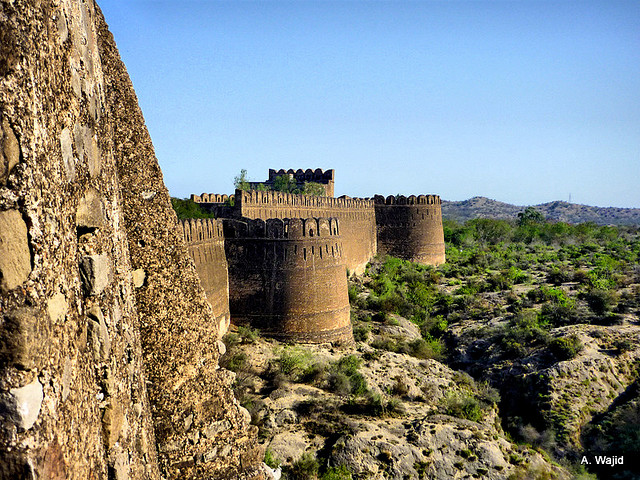 Rohtas Fort, also referred to as Qila Rohtas, is a massive sandstone military fort constructed in 1541 by Sher Shah Suri in what is now the Punjab region of Pakistan. Shah Suri constructed Rohtas to defend against attacking tribes. The fort is an “exceptional” example of early Muslim architecture known for its stone masonry, dozens of bastions and monumental gateways, all spread across more than 170 acres in the Pakistani countryside.
Rohtas is irregularly shaped because it follows the contours of the hillside upon which it was built. It features more than 65 sandstone bastions, 12 large stone gates (only one of which grants entry into the fort), several water storage stone stepwells (baoris), and even a small mosque and prayer chamber. The fort’s walled-in water storage system and mosque allowed the royal family to survive and practice Islam while under attack.
Among the most impressive design features of the Rohtas Fort are its outer walls, which range from 30 – 18 feet tall and 30 – 40 feet thick. The magnitude of these walls thwarted sieges of more than 30,000 men. The fort features Afghan-Persian, Hindu, and Islamic architectural styles. It was granted UNESCO World Heritage status in 1997 as “an exceptional example of the Muslim military architecture” which “creates the model for Mughal architecture and its subsequent refinements and adaptations” (UNESCO.org).
Below are photos of the spectacular Rohtas Fort, along with a YouTube link to a short documentary about the fort: