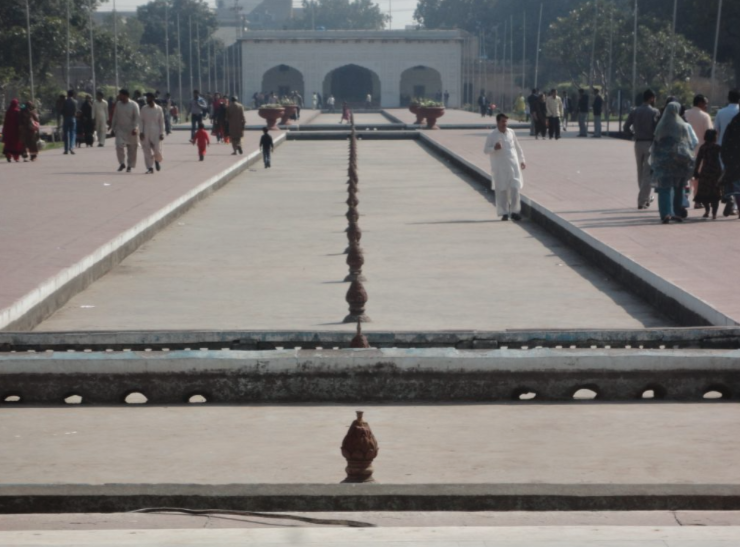 The Mughal Emperor Shah Jahan built the Shalimar Gardens in 1637. Akin to all previous Mughal landscape architecture, I found this architectural marvel to also follow some similar patterns which involve Mughal specific architecture elements – such as the Chaddar – being a total of 5, allowed the sound of water flow to enchant the entire Shalimar Gardens.

Other valuable and rich heritage elements involve the Sawan Bhaddun – pavilions, Khwabgah – sleeping chambers, Hammam – Royal bath, the Aiwan – Grand Hall. I also realized regarding the delicacy in design of the Shalimar Garden that can be seen in conjunction to the Mughal symbolic architectural detail of Chaharbagh. Chaharbagh is built in a Persian style layout, in which a quadrilateral garden is divided into 4 equal gardens. Smaller water channels divide these portions.

The terraces are subdivided by a gap of approximately 15 feet from each other. The surrounding areas are cooler due to this reason. The vastness of the fountains, the well lit Chini Khanas and the presence of water cascades always give visitors and the Lahorites a sense of well bing and belonging to the Shalimar Gardens. The space became open to the public in 1962 through an order given by General Ayub Khan.

This architectural marvel, although designed with a lot of detail, is currently in terrible condition due to littering and its close proximity to the of Orange Line Metro Train project. Garbage and waste along its boundary wall have totally damaged the historical site and also marred the beauty of the already decaying garden. Garbage filled balconies expose the performance of the least bothered authorities. The Solid Waste Management and the Shalimar Town Administration are equally responsible for the destruction of the outer side or boundary, as they did nothing to remove or lifting industrial or animal waste or garbage. The encroachments caused by the pushcarts and other vendors need to be paid off to support the area along the boundary wall.

The World Heritage Monument was put on the list in 1999. The decision came soon after the then Shahbaz government, to widen GT Road, removed the hydraulic system built by the Mughals. The UNESCO missions have since been visiting these monument every three years to assess their condition.

The Intangible Heritage of Egypt