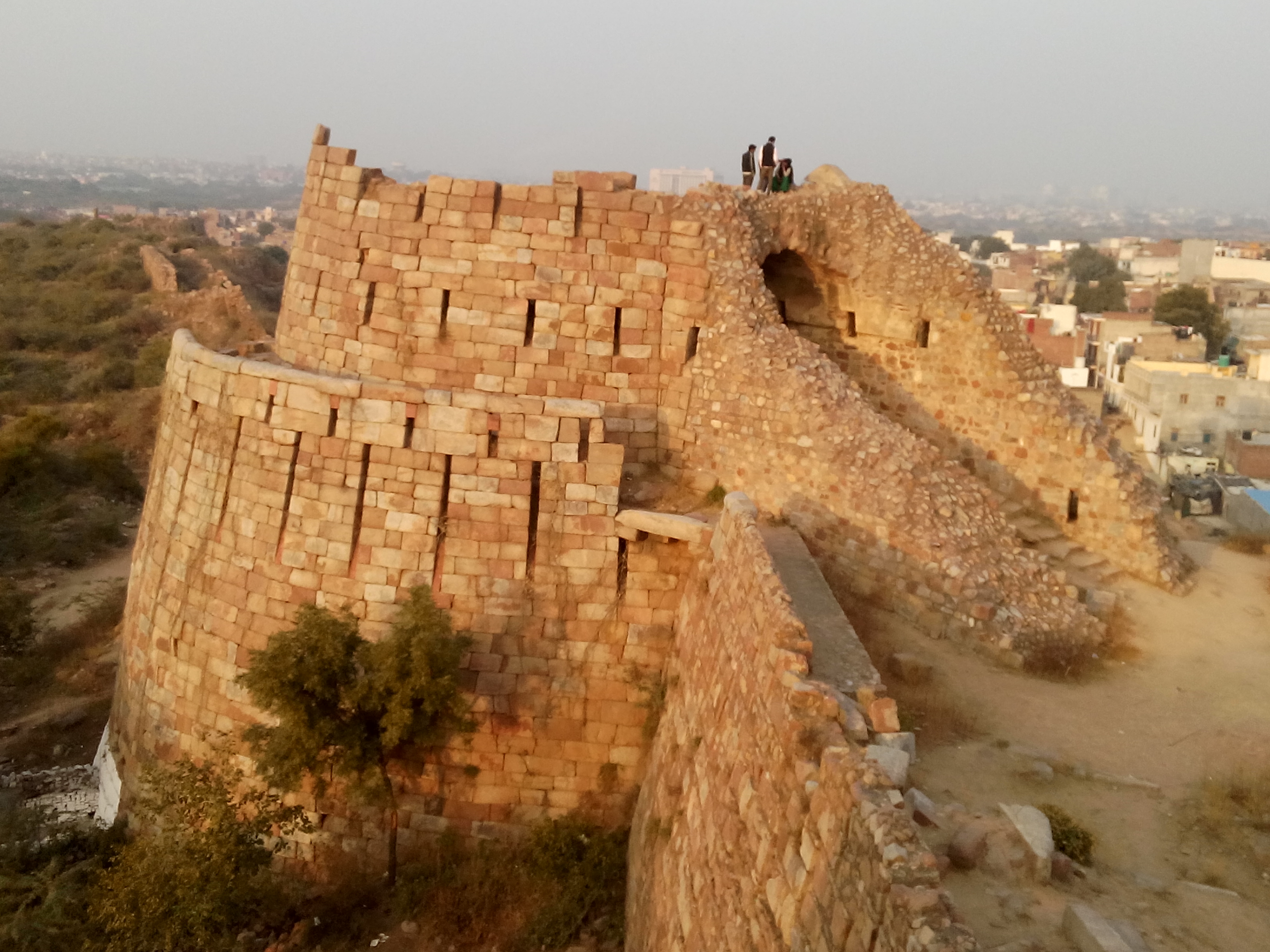 From past 8 years while going to school situated in Alaknanda or while going to college in Sheikh Sarai, I saw this magnificent fort daily – the Tughlaqabad  fort, but little did I know, how beautiful and marvelous it is from inside. It was the chance, when I explored this quaint place, I regretted why did not I explore this place earlier.

I easily reached Tughlaqabad  fort as it is nearby my place. But there is no metro connectivity, so for  people coming from far-off places either they need to take an auto or  a bus (bus routes are well connected in this area).

The massive Tughlaqabad Fort, though in an advanced state of ruin, is not only symbolic of the might of the Tughlaq dynasty, but it is a piece of architectural marvel. It is a ruined fort in situated in New Delhi, stretching over 6 km, built by Ghiyas-ud-din Tughlaq, the founder of Tughlaq dynasty, of the Delhi Sultanate of India  in 1321 AD, as he established the third historic city of Delhi, which was later abandoned in 1327 AD.

It lends its name to the nearby Tughlaqabad residential-commercial area as well as the Tughlaqabad Institutional Area. The fort is walled by Mehrauli-Badarpur road and attracts the attention of thousands of commuters going to Gurgaon, Faridabad, or various parts of Delhi.

Tughluqabad still consists of remarkable, massive stone fortifications that surround the irregular ground plan of the city. The sloping rubble-filled city walls, a typical feature of monuments of the Tughlaq dynasty, are between 10 and 15 meters high, topped by battlement-ed parapets and strengthened by circular bastions of up to two stories height. The city is supposed to once have had as many as 52 gates of which only 13 remain today. The fortified city contained seven rainwater tanks.

Tughluqabad is divided into three parts:

The crumbling ruins of the Tughlaqabad fort convey a sense of lost grandeur. The massive ramparts, battlements, and the mammoth stonework of this fort speak highly of the engineering skills of the workers who constructed it. The fort served the dual purpose of a defensive structure as well as the imperial capital of Ghiyas-ud-din Tughlaq, the founder of the Tughlaq dynasty.

The story behind the foundation of Tughlaqabad is an interesting one. Ghazi Malik, the founder of the Tughlaq dynasty, was once a slave of Mubarak Khilji, the last Khilji sultan. One day, while walking by the area where the Tughlaqabad Fort is now located, Ghazi Malik suggested to his master that the rocky prominence would be an ideal site for building a fort. The Khilji sultan laughed at his slave and suggested that the slave build a fort there when he became a sultan. When Ghazi Malik, as Ghiyas-ud-din Tughlaq, founded the Tughlaq Dynasty in 1321, he did just that—Tughlaqabad is Delhi’s most colossal and awesome fort, even in its ruined state.

The fort of Tughlaqabad was completed rapidly in a short span of four years (1321–25). On the southern side of the fort is a causeway that takes one across the (now) dry bed of a lake to the tomb of Ghiyas-ud-din Tughlaq. The tomb was built by the ruler himself and is enclosed in a private courtyard with fortified walls. Inside the mausoleum are three graves: The central one belongs to Ghiyas-ud-din Tughlaq  and the other two are believed to be those of his wife and his son and successor Muhammad Bin Tughlaq. There is another tomb in north western side. According to an inscription over its southern entrance this tomb houses the remains of Zafar Khan.

I expected this fort to be lone and solitary, but was surprised actually delighted to see so many people roaming around and getting their photos clicked.  The fort is so huge, that either you will have to commit your whole day for the same, or you need two – three days for discovering its extreme corners and stunning architecture.

Bestowed with scenic beauty, vivid  stone structures and  just a 5 rupee ticket to explore this vast expanse of enticing place, makes Tughlaqabad  fort  a must visit.

Charminar – The Iconic Heritage of Hyderabad