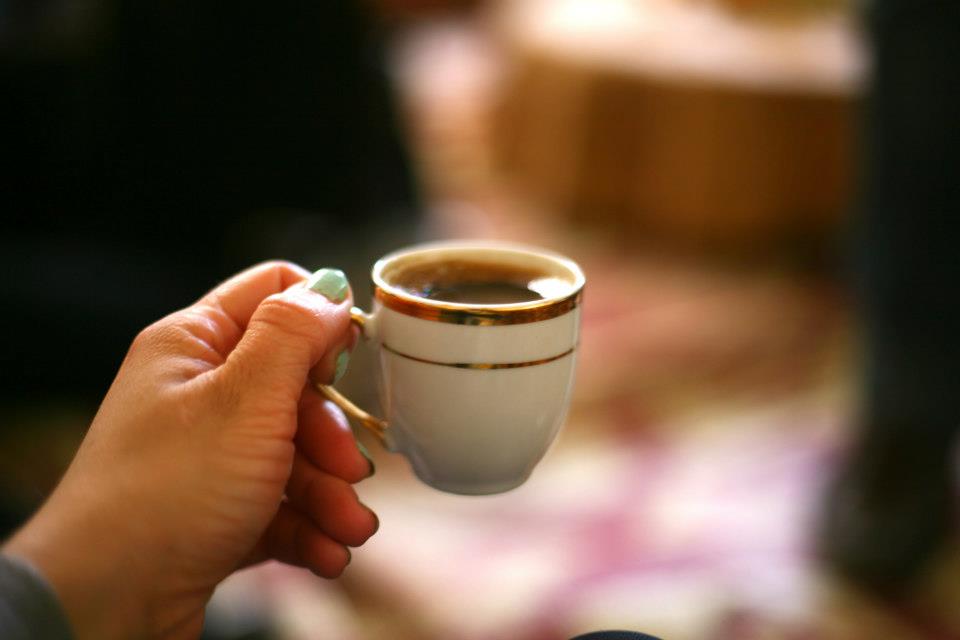 Turkish coffee is not only to be found in Turkey, but also the wider region, from Caucasus and the Middle East to North Africa. It is an unfiltered coffee consisting of roasted and finely ground beans, made in a small pot called cezve. The Turkish coffee is carefully simmered in different steps as to create the refined flavor. The coffee even has its own adjectives, specifying how sweet one wants it, from sweet (sekerli), medium sweet (orta sekerli), and plain (sade).

The coffeehouses are as popular today as they were back in the Ottoman times, and differs from the more modern cafes as they only serve drinks, are mostly frequented by men, and the characteristic table games[i]. They can be traced back to the 16th century, and have survived for centuries despite efforts by various authorities to close them, due to their leisurely and social qualities.[ii]

The coffee’s long existence has brought with it numerous traditions, ways of preparing and consuming the coffee. It has also brought about a long-standing culture of fortune telling. The Turkish coffee preparation has been developed throughout history, perfecting the process. There are different versions, and techniques, such as ways to keep the coffee warm for longer, using both the carefully layered foam on the top and the coffee grounds on the bottom.

Turkish coffee culture serves as an integrated part of traditions and ceremonies in society, and appears frequently in literature, poems, songs and similar expressions. An example of its prominence in Turkish traditions is the engagement rituals. When an engagement is in the air, a man and his relatives should traditionally visit the family and ask for the woman’s hand. The bride-to-be serves Turkish coffee to the guests, but the groom’s will be prepared with salt rather than sugar. As this can be uncomfortable to drink, if the man still drinks the coffee, it is a sign that he will be able to survive during hardship in the marriage to come. The Turkish coffee simultaneously becomes a predictor of strength and a symbol of hardship in the engagement process.

An interesting and well-known aspect of the Turkish coffee culture is the superstitious belief that the coffee grounds can be used for fortune telling. In Turkey you can find professionals reading the fortunes of people willing to pay, or you can opt for intuitive friends to read your fortune. In exploring the coffee culture myself, I went for the latter option, hoping that my Turkish friend could shed some light on my nearest future. This was a very interactive process, and to my surprise it rested much more on the intuition and interpretative skills of the person reading the cup than merely the shapes that occurred in the coffee grounds.

This unique coffee culture can provide a glimpse into the Turkish society’s mentality. One could argue that the focus on predicting the future reflects a future-oriented society. Research shows that Turkish society scores high in terms of popular belief in the importance of planning activities and living for the future[iii]. One could claim that the reading of the coffee cups reflects a society that is anxious to plan and live for the future. Having had my nose in the history books, reading about ottoman history, its architecture, and the pride that still lingers in the Turkish mentality of this grand history, I had not taken notice of this contrasting trait. Listening to my Turkish friend read my cup, interpreting the signs and what future they predicted, I realized I had missed an important aspect. At the same time we were discussing my past and present. In the middle of the reading a Turkish man commented that the Turks living for the future keeps them from living in the moment. This is all relative to the context and individuals in question, nevertheless, this simple coffee break challenged my concepts about the Turkish mentality and culture. It is a coffee culture with roots back to the Ottoman empire, and yet it keeps the focus on the future.

The predictive powers of the Turkish coffee is not just limited to the future, but also applies to the present: The way you drink your Turkish coffee can reveal something essential about your current state for the perceptive host, namely whether or not  their guest is hungry. It is said that if you drink your glass of water, that always accompanies your Turkish coffee, before touching your coffee, you are signaling that you’re hungry. Anyone who has ever visited a Turkish friend will be familiar with the Turkish hospitality, and the way they look for small signals of their guests being hungry only adds to my impression of the Turks as generous hosts. A friend informed me that there are different kinds of Turkish coffee, some stronger than others, which are saved for special guests, confirming the emphasis on welcoming guests in the best way possible.

My first cup of Turkish coffee a couple of years back was a good experience, up until the end of the cup, where the taste suddenly changed. I didn’t know, as a novice to this black gold, that the grounds in the bottom should be left for fortune telling or at least only consumed by the more experienced. My Turkish friend will gladly eat it with a spoon, but for newcomers I would recommend sticking to the liquid. The thick coffee will also rest on your teeth, so keep that water close.

Turkish coffee culture has been added to UNESCOs list of intangible heritage for good reasons, as it is not merely just a coffee brewing art, or a fortune telling practice, but rather a highly appreciated aspect of daily life, full of symbols and different meanings, and incorporated into traditions. It brings people together for a moment to enjoy, discuss, and to look to the future. Meanwhile the Turks continue to reinvent and adapt to the present this culture with deep roots in the past.

The Corny Flavours of the Indian Monsoon