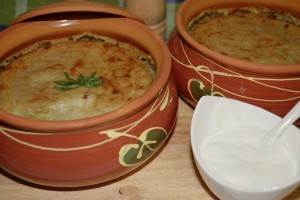 History is an “ingredient” in the culinary traditions of a nation. Unique nutritional habits and attitudes can be found in every village, every district and every cities in every countries all around the world. Belarus is not an exception. The main products of agricultural in the territory of Belarus are cereals as a rye, barley, wheat and other grains. For centuries, Belarusians still continue to eat bread, cereals, vegetables and legumes.

Potato (bel. бульба (bulba) ) has been considered by various researchers and culinary experts as the symbolic product for Belarusian and as representation of their identity. This unique vegetable becomes typical in the minds of Belarusian and it is considered as a national culinary-heritage. The heritage of culinary tradition impacts the formation of identity in Belarus. In the last twenty years, there has been a dramatic increase of interest in traditional Belarusian cuisine, which can be seen in a numerous culinary articles and books. The research includes different historical, ethnographical and anthropological characters. Furthermore, they are trying to recreate the traditional Belarusian cuisine.

In Belarus, potato has a symbolic historical meaning. It started to appear from the second half of XVII century in Belarus in the years 1676-1687. It became widespread in the territory of Polish-Lithuanian Commonwealth where modern Belarus was a part of this confederation. Later, it became one of the most popular product in the Belarusian cuisine[1]. In Soviet times, the unofficial nickname for Belarusians was ”Bulbashi” (potato-lover or potato-eater). The nickname ”Bulbash” was used  to  represent regional specialization  of Soviet Belarus as the main potato producer within Republics of the Soviet Union. During the 1970s and 1980s, Belarusian Soviet Socialist Republic was conducting a process of breeding and improving varieties of potatoes’ types. One third of potatoes’ farm in the USSR was located in Belarus. Modern Belarus has the highest number per capita consumption of potato and potatoes’ products around the world that is amounted to 177 kilograms in 2014[2].

There are many recipe diversification with potatoes as the main ingredient in traditional cuisine of Belarus.  Some of the most famous dishes are Potato kishki (potatoes with intestines),  Kopytki (little hoofs), potato dumplings,  Babka (literally  means Granny, potato with pork), potato Tushenka (potato stew with mushrooms),  Tarkovanka (potato desert with fresh apples), and finally the most well-known Draniki (potato pancakes). It is a must to try at least one of the dishes for everyone, especially for people from eastern European countries.

There are two dishes that are very typicaly cooked in Belarusian family, including my family. One of them is is Babka(Granny) and the other is Draniki (potato pancake), which the most well-known dish in Belarus. Both dishes are wide-spreaded in all country and they are the most popular in everyday life. Traditional Dranikis are roasted on oil, however in the past, it used to be prepared on lard as a visceral fat. It is different from vegetable oils because it is completely absorbed by the human body.

Since the biblical times, different nations had a meal that was made from finely frayed vegetables. For example, the Jews had a Kugel, which is made from carrot, pumpkin, zucchini, which are grated baked. On the territory of Belarus, Kugel recipe was significantly changed where farmers gradually began to prepare dishes from potato in the XVII century.

Babka is one of the dish that was invented from a modifided Kugel. The name came from one of wealthy aristocrat houses desert recipe, which is wide-speaded in European and known as a Rum Baba. According to one of the legend, the name “Babka” which literaly means “Granny” was used by the aristocrats to made fun out of peasants because only “Granny” can afford this potato dish[4]. It was became a paradox and and irony  as in the end, the name was attributed for this dish. Nowadays, the peasants dish is still popular and loved by the people of Belarus, while the original dish, Rum Baba, is not so popular anymore.

Belarusian Babka is quite easy to make and it does not require a complicated preparation process. Firstly, potatoes are grated and the added to potato dough wit salt, sliced friedbacon, meat and onions. In some recipe variation,  egg, sour cream and flour can also be added. After that the potatoes’ dough should be poured into a mold before being put into a deep frying pan. The mold can also be out into ceramic pot to bake in the oven for around 30 minutes[4].

The most popular Belarusian dish is Draniki (potato pancakes), which is also called “local chips” by some Belarusian children.  Potato pancakes are spreaded not only in Belarus but also  in the Switzerland, German, Norwegien and Polish culinary traditions. Probably, they were introduced into Belarusian territories from local Jewish inn or European tavernaes.  However, a traditional recipe of real Belarusian potato pancakes has its own specifics. Traditionally, Draniki are made only from potato, onion and salt.  It also has a simple recipe: the potatoes should be peeled, washed and grated with an onion. Salt is added and mixed well and the mixtures are fried with vegetable oil until golden brown[3].

Babka and Draniki are always served in the morning during the breakfast. This is because potato has high calorie to provide energy for all day activities. They are not usually be prepared for dinner as they are considered too heavy for digestion system during evening and night. Since XVII century till now in modern Belarus, potato has a significant role for Belarusian people in providing necessary nutrition in daily life.

From historical perspective, rich varieties of potatoes based traditional cuisine in Belarus which have been evolved over the centuries are the contribution from Belarusian to the world culinary traditions. Even though the potato itself is not originally from Belarus, but it is well loved and become an important element in the national cuisine. For Belarusian people , potato is adopted but it is loved as their own children.

My Grandma Does it Better!