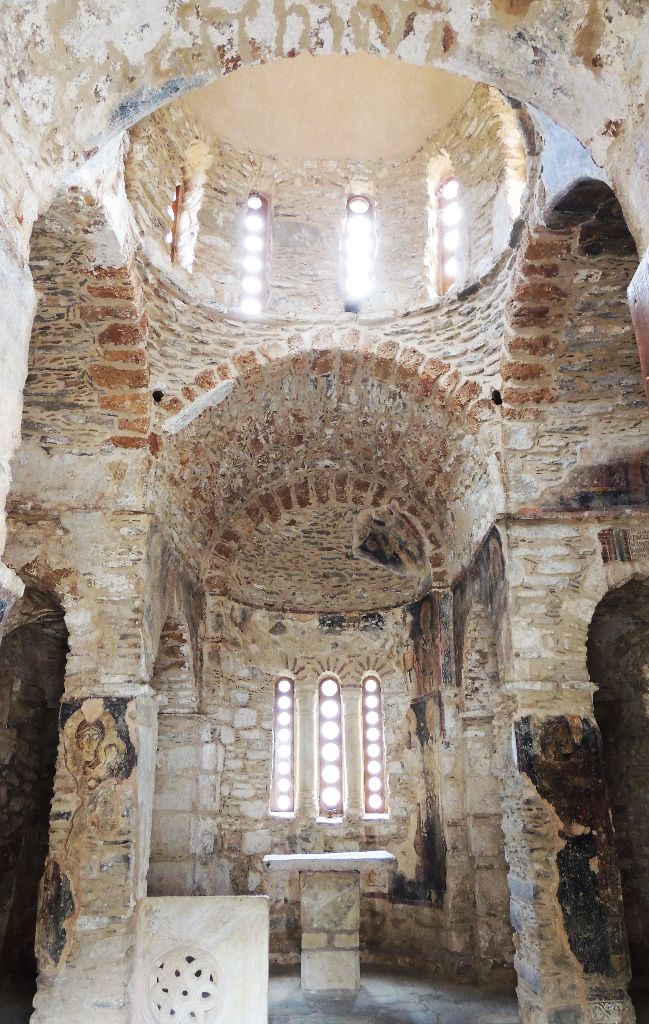 The island of Crete has the honor to be called the birthplace of the earliest “high culture” in Europe because of the Minoan civilization of the Bronze Age (c. 2700–1420 BC). And therefore, Minoan Crete has been studied more than later periods of Cretan history and architecture, such as the Byzantine period.

However, numerous Byzantine Orthodox churches rest all over the island, some of them are in service even today – especially on a Saint’s day or a festival. The ethereal and delicate style of the small Byzantine churches, their way of standing out in the fields despite their size, their stunning stained glass windows and spiritual frescoes and mosaics make it impossible not to charm their visitors.

The Temple Of Virgin Mary’s Presentation In Central Crete

On the edge of fields and orange groves, not too far from the picturesque Fodele village in Crete, is located a small and highly important relic of the mid-Byzantine era, the Greek Orthodox Church of Virgin Mary’s Presentation.

This byzantine Church is a domed, simple four-columned type, cross-in-square church with no narthex. The church has been planned and constructed with a combination of architectural elements from the styles used on the Greek mainland and in Constantinopole.

The Church has been built over the ruins of a three-aisled basilica and many of the materials, which used for its construction, came from the former temple. The monument is built of a rubble masonry technique, using cut stone and brick.
In the interior of the church, there are four pillars corresponding to the columns of the naos (=temple in Greek). These pillars serve structural purposes by reinforcing the exact points where the weight of the vault is transmitted.
The openings of the church are limited. The windows of the cupola are single-light ones, where the brick step frame is confined to the lights’ arches. The middle apse has a three-light opening, whose lights are separated by marble mullions holding dosserets in relief.

The cross arms were roofed by four saddle-roofs covering an equal number of tunnel-vaults, while the angle chambers have cross-vaulted roofs. Τhe western entrance gate is also crowned with a semicircular arch that stands on a stone threshold. Moreover, in an attempt to gain more plasticity and motion, all the openings were encircled by wide brick blind-arches, as well as, dentil courses.

When entering a Byzantine Greek Orthodox Church, you are surrounded by familiar glowing representations of the faith and liturgy. Their interior is usually covered with fine frescoes*, depicting religious images of Christ, the Virgin and other holy figures. Particularly, specific scenes and saints are placed in explicit locations within the church. For example, the dome represents the heaven and is decorated with a figure of the Christ Pantocrator, but unfortunately, little remains in this church of this fresco.

The Church of Virgin Mary’s Presentation displays an exceptional multi-layered painted decoration in its interior. Three different historical layers of frescoes, with different artistic techniques and styles, were discovered in the main body of the church.
The first layer dates back to 11th century and it stands for its high quality. Remains of this layer are preserved till today at the western angle chambers and at a small part of the cupola. The second, as well as the third, chronologic layers of frescoes, go back to the 13th and 14th century respectively, and cover the southwest and northwest section of the main body of the church and part of the sanctuary. On the semicircular conch of the sanctuary’s apse appear fragments of the Virgin Mary, while the lower zone shows the Saints Vassilios and Gregorios.

It is common in Greece for monuments to be built over the ruins of former ones to emphasize the significance of the specific location. Several major archaeological sites own their preservation to this reconstruction.

The Church of Virgin Mary’s Presentation was built above the eastern part of a prior, three-aisled Basilica with narthex. A lot of materials of the former temple were used for the construction of the new one. Therefore, the lower parts of the colonnade, as well as, part of the basilica’s eastern wall, were embodied in the later church.

Other remains of the Basilica are also preserved till today, as the two western pilasters, that used to separate the main body of the church and the narthex, a marble inlay on floor (opus sectile) in the northern part, and a marble panel with geometric and vegetal decoration.