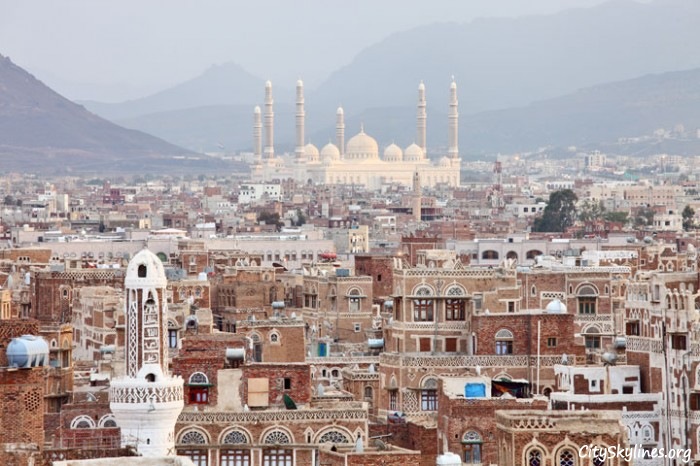 Sana’a is one of the oldest continuously inhabited cities in the world.Sana’a is the capital of Yemen which is situated at an altitude of 2,300 m and makes it as one of the highest capital cities in the world. The Old City of Sana’a is defined by an extraordinary density of rammed earth and burnt brick towers rising several stories above stone-built ground floors, strikingly decorated with geometric patterns of fired bricks and white gypsum.

Jami’ al-Kabir (Great Mosque) is one of the oldest in the Muslim world,it can be dated back to the 7th century.

The 1,000-year old Bab Al-Yemen known as the Gate of Yemen at the centre of the old town.One of the most popular attractions is Salt Market.The Yemen Gate is an iconized entry point through the city walls and is over 700 years old.

Football (soccer) is the most popular sport in Sana’a. The city is home to the Ali Muhesen Stadium, home of the Yemen national football team, and is mostly used for football matches. The stadium holds 25,000 people.

The Prehistoric Rock Art Sites in the Côa Valley is located near the Portuguese and Spanish border, a few miles apart.These engravings were discovered in the course of construction of a dam in this valley.  The Côa Valley  features engraved rock drawings of horses, bovines and other animal, human and abstract figures, dated from 22,000 to 10,000 years BC.

What to See at Coa Valley Rock Art ??

The rock-art  sites of the Coa Valley are all protected inside a vast archaeological park. There are three main sites:

Penascosa, close to the village of Castelo Melhor.Here, where the valley opens up, a relatively extensive beach formed from river deposits. More engraved rocks may yet be discovered beneath its sands. Carvings depict ibex, horses, aurochs and some fish.