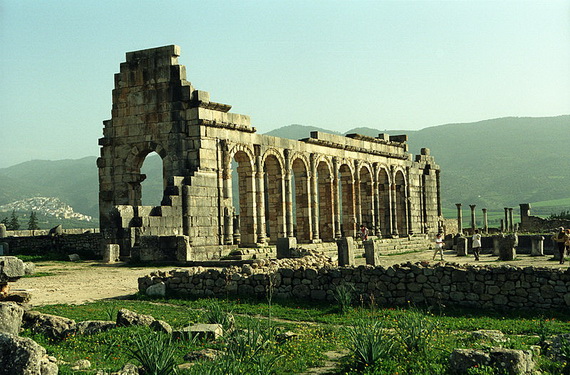 The Archeological Site of Volubilis was recognized by UNESCO as a world heritage site in 1997.The Archaeological Site of Volubilis encompasses the remains of a Roman city that was capital of Mauritania Tingitana. It is notable for its high number of mosaic floors. Also, marble and bronze statues have been found.
It is believed that this spectacular city was constructed around 40 AD and that it was built on an old settlement which dated back to the third century. It became the administrative capital of the area and was known as Mauretania. The extremely fertile lands that surrounded the city produced olive oils and grains that were exported to Rome. Archeobotanical projects at the site have proved that two types of wheat were produced here. Scientists have found evidence of Emmer (Hulled Wheat) and of free-threshing wheat. It is suggested that most of the wheat was stored, while the excess was used as a fodder for livestock and animals. Over and above the evidence of wheat being present, studies have identified linseed, melon seeds, grapes and figs. Ongoing projects are examining wood charcoal pieces to investigate the species of vegetation that existed during this time. It is also known that after the Romans withdrew from Morocco – which happened around the end of the third century – the city was not left uninhabited. An earthquake in the fourth century is believed to have caused extensive damage to Volubilis but documents have revealed the arrival of Idris I in the year 788. Idris founded the Idrisid dynasty and on his death in 791 he was laid to rest in Moulay Idris. Another earthquake rocked the site in 1755, possibly causing its final abandonment. In the eighteenth century builders started to loot the ruins for building materials.

Volubilis has all the works of an ancient Roman city: forum, triumphal arch, capitol, basilica, baths, private houses. Only about half of the site has been excavated. is an exceptionally well-preserved example of a large Roman colonial town on the fringes of the empire. The archaeological remains of several civilizations are to be found there, representing all the phases of its 10 centuries of occupation, from prehistory continuously through to the Islamic period .

Preservation of Natural and Artistic Beauty